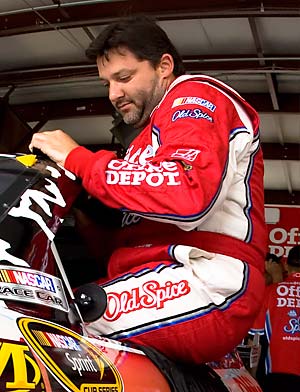 UPDATE So should Stewart take up Penske's offer? Stewart has never won the crown jewel of IndyCar racing – his best finish is a 5th with 64 laps led in 1997. He's also never won the Daytona 500, going 0-14.

So how about this proposal: if Stewart wins the 2013 Daytona 500, he takes Penske's offer. Only Mario Andretti and AJ Foyt have won both races. Mario was the first and his Daytona win came in 1967, and he won at Indy in 1969. Stewart would have the opportunity to be the first driver to win both in the same season, and if he prevents his 0-fer streak from getting one closer to Dale Earnhardt's in Daytona, why shouldn't he go for it in Indianapolis?

Of course, there are many logistics to sort out if Stewart was to take Penske up on his offer; namely sponsor conflicts (Mobil 1 vs. Shell Pennzoil) and the time juggling that would be required to maintain a regular Sprint Cup Series focus while getting in as much seat time as possible in Indianapolis.

After all, Indianapolis is the race that Stewart grew up attending and dreaming about. And it's a track that, like Daytona, has teased him with strong performances. With Daytona knocked off the bucket list, only Indy would remain unchecked. It'd be too tantalizing to pass up. Yahoo Sports

12/01/12 If Tony Stewart wants to run the Indianapolis 500 next season, Roger Penske will give him a car.

Penske twice Friday night offered Stewart the chance to enter next year's race and insisted he's serious about the opportunity.

"Where's Stewart?" Penske asked during his speech accepting the Sprint Cup trophy during NASCAR's season-ending awards ceremony. "How about doing the double at Indy this year? You available?"

The banquet room at Wynn Las Vegas Resort broke out into laughter, but Penske later insisted he was serious.

"If he wants to do the double, I'd put him in it," Penske said. "We've talked about it before. I guess I made it official tonight."

NASCAR's three-time champion twice attempted to run both the Indy 500 and NASCAR's Coca-Cola 600 on the same day. In 1999, he was ninth at Indy and fourth at Charlotte, and in 2001, he was sixth at Indy and third at Charlotte.

He hasn't tried Indianapolis since, and has seemingly let go of his childhood dream of winning the 500. He has twice won the Brickyard 400, NASCAR's race at storied Indy.

"The hard part for me was you make that decision when you sign up to do (NASCAR)," Stewart said last January. "The decision you make, you have to come to peace with yourself with saying 'I'm not going to do this.' That was my childhood dream anyway. It was hard knowing when I signed that (NASCAR) contract that I was writing off the opportunity to go race at Indy.

"It's figuring out at the end of the day what do you really want to do. I guess that's the part that even though it was hard to watch opening day of practice at Indianapolis, I'm enjoying what I'm doing, too, and this is what I want to do at the end of the day. It makes you want 30-hour days and 400-day years and we always want to do more than what we're capable of doing, but the reality is you have to pick at some point and choose your career path. This is what I've done."

Stewart ran the Indy 500 five times, winning the pole as a rookie in 1999 and leading 44 laps before his engine failed. His highest finish was fifth in 1997.

Penske said it would have to take some scheduling adjustments between IndyCar and NASCAR in order for Stewart to run the Indy 500 and the Coca-Cola 600 at Charlotte Motor Speedway, and he's not sure the two series could work together to make it happen. ESPN.com