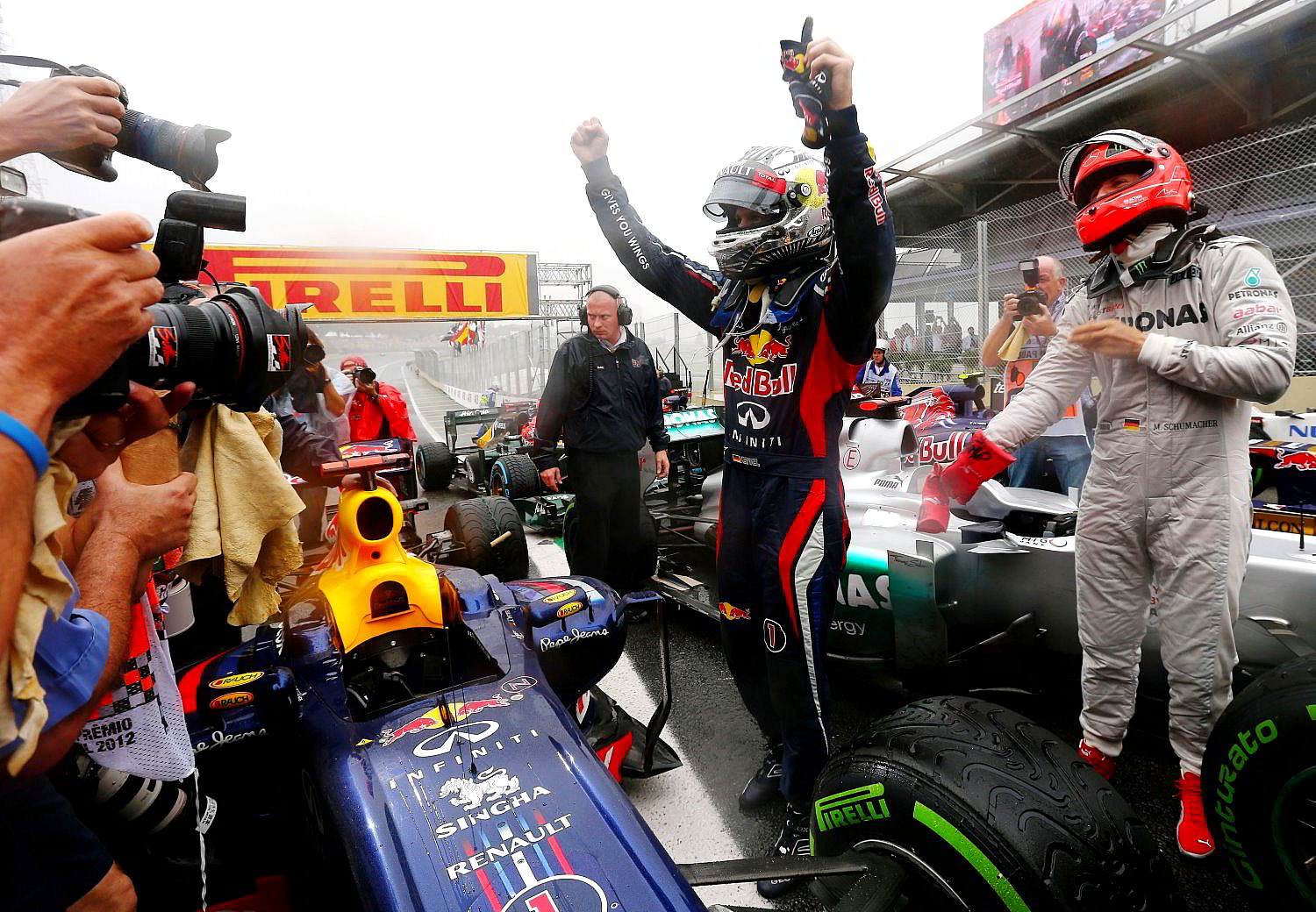 "A lot of people tried to play dirty tricks," the German said in a television interview immediately after the Brazilian grand prix.

Maybe the incessant and destabilizing rumors of Vettel's switch to Ferrari, or suggestions Red Bull only wins because its car is illegal or the team refuses to stick to budget restraints?

Vettel refused to be much more specific than that.

"Sorry but I think I've mentioned everything I have to mention," he said.

"I think it's clear but it's not for us to rate … we have to focus on what we have, what is in our hands and getting excited about what others are doing — what's the point?" added Vettel.

He admitted, however, that given Red Bull's on and off-track struggles in 2012, victory in the end was particularly sweet.

"It is always important that you are happy with what you see in the mirror," said Vettel. "There is no point in being a fake or trying to cheat.

"I have made mistakes like everyone else, but the way I was brought up, I was told to be honest."

Vettel's defeated title adversary Fernando Alonso did not congratulate Vettel in his official post-race statement, but he insisted he did not feel beaten in Brazil.

"The championship was not lost here," France's RMC Sport quotes him saying.

"I lost the championship earlier, like when Grosjean went over my head (at Spa). There are many situations of the season that make me think about these 3 points, but that's sport.

"Even though I finished second, I have never had so much respect and affection from the people in the paddock.

"It is the first time that not only the fans, drivers, old drivers and even the teams have all told me that we did the best championship," said Alonso.

"The result in Brazil underlined that he (Alonso) is the world champion in terms of what he deserves," he told Mundo Deportivo newspaper.

Maldonado hopes for Williams news in 'coming days'
(GMM) Pastor Maldonado is hopeful he will still be Williams' "first driver" in 2013.

It is expected the PDVSA-backed Spanish grand prix winner and Venezuelan will secure a new deal, but the famous British team is yet to announce its decision.

It is believed the only real uncertainty is over Maldonado's next teammate, amid speculation Williams intends to replace Bruno Senna with the Finnish rookie Valtteri Bottas.

Maldonado told EFE news agency: "I'm sure next season will be better for the team, better for me.

"So far no one is confirmed (for 2013), neither Bruno nor myself, but Bruno has done a good job this year and contributed to the development of the car.

"Let's see what happens in the coming days. I hope to have a quick response and be confirmed," he added.

Maldonado, 27, said he enjoys being the driving "spearhead" at Williams.

"I really like the team and I think for a guy like me there is no better place to be," he said. "I would still be the spearhead of the team, the first driver."

F1 owners could oust Ecclestone over bribery charge – reports
(GMM) Bernie Ecclestone's days at the helm of formula one could be numbered, reports by Germany's Suddeutsche newspaper and the SID news agency claim.

"Formula one could soon have a new ruler," said the SID wire report.

The Suddeutsche Zeitung said there are "detailed preparations" being made to potentially replace the 82-year-old Briton, if Munich prosecutors decide to charge him with corruption over the Gerhard Gribkowsky bribery scandal.

The report said Delta Topco, the Formula One Group's majority CVC-owned holding company, is considering stepping Ecclestone down and replacing him with an interim chief executive if "as expected" he is charged in the coming weeks.

Vettel did not pass illegally en route to third title
(GMM) Fernando Alonso and Ferrari's supporters were clinging to hope even after Sebastian Vettel sealed his third consecutive world championship on Sunday.

However, the apparent infraction was not investigated by the stewards during the race, raising suspicions the officials had not noticed.

So it became a post-race point of intrigue, given that if Vettel was subsequently demoted from sixth to eighth place, Alonso would have won the championship by a point.

"The yellow flag, (there's) not any news," the Spaniard told reporters after the podium ceremony.

Alonso said race winner Jenson Button had told him about the possibility Vettel had passed illegally.

"There was some kind of hope when he told me there is some yellow flag problem but then I think it was not true," he admitted.

Indeed, it was Ferrari's technical boss Pat Fry who clarified that the waving flag was actually colored yellow and red, which is a warning to drivers about treacherous track conditions.

Fernando Alonso came agonizingly close to winning the 2012 Championship at the Brazilian GP on Sunday after finishing on second on the podium behind Jenson Button. However, he fell short by four points as Sebastian Vettel secured sixth place to become Formula One's youngest-ever triple World Champion.

The Italian outfit, though, knows that their slow start to the year and their poor qualifying performances cost the Spaniard dearly this campaign.

Fry says the team have been working on their 2013 challenger for several months, but he hopes they don't repeat the mistakes they made this year.

"There are lots of things that, with the benefit of hindsight, we would have done differently," Fry said.

"We did the best we could, but we need to build a quicker car for next year. The people at the factory are already focusing on next season's car and have been for several months already. We need to learn from the mistakes we made at the start of the year."

Vettel in a club of his own now, says Webber
Mark Webber congratulated teammate Sebastian Vettel on an historic third World Championship title, becoming the youngest three-time winner in the sports history and only the third driver to win 3-straight titles.

“It really is very, very special to do it three times," Webber said after a chaotic and entertaining Brazilian Grand Prix.

“He’s in a club of his own now. Last year was quite straightforward but this year, like 2010, was more difficult. Three in a row is going some, for sure! So I congratulate him on a great effort."

Massa cries on home podium
Felipe Massa was reduced to tears on the Brazilian GP podium, having run second before yielding the place to Fernando Alonso. T

“I don’t know what to say or what I feel…it was such an emotional race to get third and I just think it was really fantastic," he said, having shot up to second at the first corner. “The second part of this year has been great preparation for 2013 – everything has just come together now because the first part of this season was just a disaster."

“So many things have happened since the last time I came through that door," he continued, indicating the door onto the podium. “It hasn’t been a great time for my career but I’ve learned a lot and it was certainly a life experience. This is a great feeling."

First Lap Crash: Vettel spun by F1's moving chicane
Crash between Sebastian Vettel (Red Bull), Sergio Perez (Sauber) and Bruno Senna (Williams) during the first lap of the 2012 Brazilian Formula One Grand Prix. With Vettel gunning for a third straight title watch as F1 backmarker Senna tries to stick his nose down underneath Vettel as if he thought he was going for the race win or something on lap 2! He would have been lapped several times in the race so what did he think he was going to accomplish.