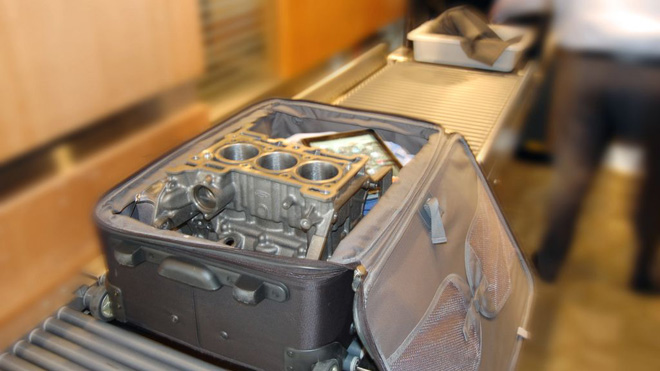 Spirit Airlines would have a field day with this.

Ford’s new 3-cylinder engine is so small it can fit into a piece of carry-on luggage.

At least its aluminum block is.

A team from Ford brought the heart of the smallest engine it makes to the security checkpoint at Detroit Metro airport in a roll-on bag, put it in a tray and ran it through the X-ray machine to demonstrate just how tidy it is.

Over the summer, the efficient powerplant was named International Engine of the Year. The 1.-liter turbocharged Ecoboost 3-cylinder is currently on sale in several vehicles it sells in Europe and will be coming to a U.S. market car next year, likely in an updated version of the Ford Fiesta compact. The 125 hp engine promises a combination of 4-cylinder power with 3-cylinder fuel efficiency. The only other 3-banger on sale in the United States is found in the Smart Fortwo, which features a 70 hp 1.0-liter motor.

Of course, you probably shouldn’t try this at home, or the airport. Ford set up the stunt ahead of time with the TSA, which doesn’t normally allow photographs to be taken in the security line, and didn’t actually bring it onto a plane.

That might be for the better as most airlines, including Detroit’s hometown favorite Delta, have weight limits for carry-on luggage that max out at 40 pounds while the engine block weighs about 52 pounds.

Besides, would you really want to try and get that into the overhead bin? Fox News