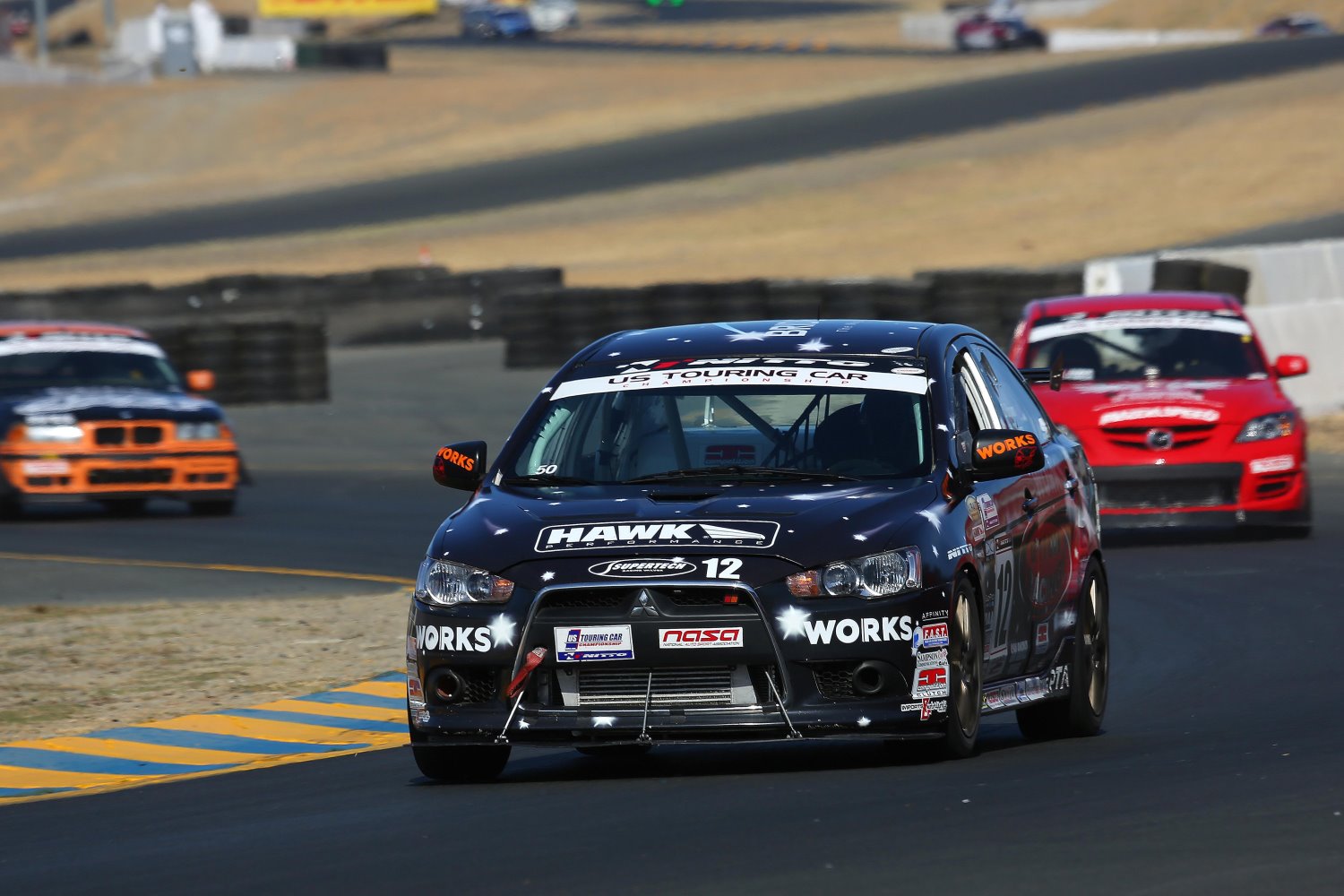 Sonoma, CA – Dave Brown won his second race of 2012 at Sonoma on November 11, 2012 driving the Competition Clutch/Hawk Brake Mitsubishi Lancer. Brown was the quickest driver in every session of the weekend, started from pole position and led every lap on his way to the Race Ramps victory circle. Behind him was a huge battle for the championship lead by Chris Lock’s Roger Kraus Racing Honda Prelude who finished in second place and turned the quickest time of the race.

Finishing in third place was the newly formed team of Felipe Cabezas and Tim Barber in the TNI Racing Mazdaspeed 3. In GT, Ken Kurtz won the class in his Yokohama Pontiac Trans Am while rookie Daniel Akhromstev finished second in the PTF Racing BMW M3. John Trefethen finished third in the Trefethen Vineyards Ford Mustang.

Brown knew he had a quick car after being quickest in every session. The question was whether Brown could finish the race after mechanical problems have hurt them all season long and dropped them out of season championship contention. Brown took off like a rocket at the start and never looked back and made it look easy. “It has been an up and down year for us and it was nice to end on an up note for all of our sponsors and crew that have worked so hard on this car," said Brown after the race. Behind him a huge battle was brewing as Lock, Barber, and the other TNI Racing Mazdaspeed 3 of Doug Makishima were all fighting for position.

The race had huge championship ramifications. Robert Thorne was leading the championship in the KPAX/ Autoparts Warehouse Volvo C30 with a slim 10 points lead over Lock. Lock basically needed to finish about three positions ahead of Thorne to secure the title. Everything was going well for Lock as Thorne’s KPAX team was caught out in qualifying. The second qualifying session was to be twenty minutes long and the team had still not set a very fast lap waiting for a good gap in traffic.

A blown engine by the MBO Motorsports Honda Civic of Pete Bovenberg necessitated a red flag after oil covered much of the track. The shortened session meant that Thorne would start from the fifth position while Lock would start from second. At the start, while Lock was comfortably in second place, Thorne was in the middle of a huge traffic jam risking it all to fight for every last point.

With four laps to go in the race, it looked great for Lock. He was in second with an eight second margin over third place. Thorne was in sixth place and looked like he would stay there. Suddenly a full course yellow came out for someone’s bumper that had come detached and was sitting in the middle of the track. The NASA safety crew were on top of it quickly but the damage was done and now the margin between Thorne and Lock was only a few seconds.

Once the green flag came out, Thorne attacked. He passed the MBO Motorports Dodge of Curt Simmons immediately as Simmons put four wheels in the dirt. Next he passed the TNI Racing Mazdaspeed 3 of Barber at Turn 4. He was now in fourth place while Lock was in second. He then received the white flag indicating that there would be one last lap. He needed one more position but Makishima, who was just ahead of him looked strong.

Suddenly Makishima went a bit too deep at Turn 7 and Thorne was through to third place which meant he would win the championship if he could finish in this position. But in the last turn on the last lap, the TNI Racing Mazdaspeed of Barber fought back and snuck underneath Thorne. From there it was a drag race to the finish line which was won by Barber.

With Lock finishing in second and Thorne in fourth, this meant that they were tied after an entire season of racing. The teams were quickly doing the math and looking up tie breaker procedures. The first tie breaker was who had the most wins. The pair was tied here as well with one win each. The second tie breaker was who had the most second place finishes. Thorne had three seconds compared with two seconds for Lock. On the virtue of one more second place finish, Thorne became the 2012 USTCC Driver’s Champion. Lock fought valiantly and finished second while easily winning the iGrill Top Rookie Award for being the best rookie of 2012. Kurtz became the 2012 USTCC-GT Driver’s Champion, winning the title four years in a row.

The Go Pro Hero of the Race was Dave Brown for winning the race. Brown received a Go Pro high definition camera for his work.

Shawn Yu took the Auto Tech Interiors gauge award for being one of the most improved drivers of the weekend.

The Stack Gauge award went to Dave Brown who kept his car running trouble free all weekend long on his way to the victory circle.

Tim Barber won the Ironclad award for working so hard all weekend and fixing more items than any other team during the weekend.

The Le Mans Karting Fremont Seat Time Award went to Shawn Yu for having the slowest fast lap of the race.

Optima Batteries light up most of the engines in the USTCC and Optima provides a free battery to the top three finishers.

Rich Woo earned a pair of Swift Springs that can be used to tune the Acura to go even quicker.

The Sampson Racing Radios $75 gift certificate went to Curt Simmons who was off the track several times but still finished in sixth place.

The Go Light award went to Chris Lock for a great job qualifying in second and finishing in second place. He won a brand new remote controlled Go Light.

Tim Barber received the Hawk Brake Award for a great pass for third place under braking on the last turn of the last lap.

Larry Bani took home a set of Project Mu racing brake pads for going off at the first turn on lap one and charging back to finish seventh.

Airaid Breathtaking Award was given to ken Kurtz who made a bold move to jump to the lead of the GT class after starting in the back.

Andy Chittum was quick all weekend long but had mechanical issues which ultimately sidelined him. Andy won a $500 gift certificate from Advanced Clutch Technology.

Ben Ho drove a clean race and won a Specialty Products alignment gauge for his efforts.

The HoverCam Document Camera Award went to Doug Makishima who was running in second position with two laps to go and ended up finishing fifth.

The DXG USA Camera Award was given to Tom Milburn who missed all of Saturday but came back and had a great battle with Rich Woo.

The iGrille Top Rookie Award went to Chris Lock who was the highest placing rookie in the field.

Winning a Polar heart rate monitor watch and the Polar Heart Stopping award was Dave Brown for a terrific restart when it looked like he may not win the race.

Blackstone Labs, provided a free engine oil analysis to Robert Thorne who fought back all race long, worked his way up to third place and eventually finished in fourth.