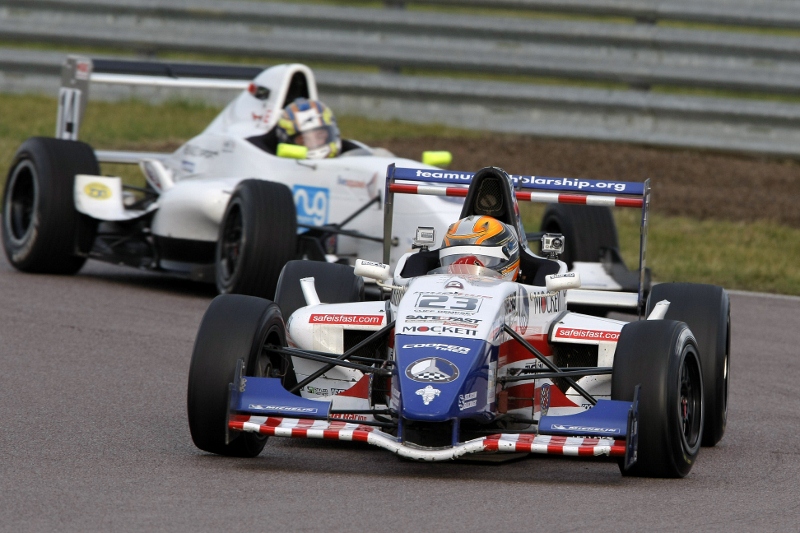 Matthew Brabham turned on a virtuoso display in this afternoon’s final round of the Formula Renault BARC Winter Series at the Rockingham Race Circuit, fighting his way into contention for the lead on slick tires in damp conditions before finally having to settle for second place.

The American-born grandson of three-time Formula 1 World Champion Sir Jack Brabham started from ninth on the grid and, after consultation with team principal Cliff Dempsey, boldly elected to run slick tires on an extremely slick surface. Virtually all the other front-runners chose to remain on treaded tires.

Brabham picked up two places on the opening lap, worked his way into second by Lap 11 and closed inexorably onto the tail of race leader Jack Aitken. The Fortec Motorsport youngster then employed some “robust" tactics to keep Brabham behind him, including almost driving him into the wall on the exit of the oval Turn One and later pushing him onto the grass at the exit of the Tarzan hairpin on Lap 14. Aitken’s brazen maneuvers included nudging Brabham into a spin at the final corner on the following lap. This year’s Cooper Tires USF2000 Championship Powered by Mazda winner quickly recovered to cross the line in third, but was credited with second when officials realized the race should have been concluded after 14 laps.

The top two finishers, Aitken and Brabham, were summoned to the stewards’ office after the podium ceremonies were completed but no further action was taken.

“It was a bit disappointing," said Dempsey. “Matt drove a fantastic race. The chief steward said that Matt deserved to win the race and probably would have won it if it had been a regular-season championship race. Honestly, we could have protested the decision but that’s not the way you like to win a race. Everybody saw how well Matt drove. He made his point."

Brabham also made his point in testing on Thursday and Friday, unofficially posting the fastest times in the dry. Unfortunately, the weather turned sour overnight, so the 19 competitors were greeted by fully wet conditions for their half-hour qualifying session which set the grid positions for both 14-lap races. In Race One, still in the wet, Brabham made a fine start and rose as high as fifth before succumbing to a couple of errors which dropped him as low as 13th. He eventually finished ninth.

He also lined up ninth for Race Two and was the only leading contender to opt for slick tires.

“We made a bit of a gamble and didn’t really have anything to lose so we decided to go for slicks instead of wets," said Brabham. “I think everyone else just played it safe. The track was pretty much dry except for just a few areas where I had to be real careful."

In fact, Brabham spun on his reconnaissance lap but was able to continue and regain his original starting position.

“I caught a little bit of the wet line and it just tipped me around, so I wasn’t really too concerned about whether it was the right or wrong decision," said Brabham. “I felt confident with the dry tires but it definitely made me think twice on the first lap so I was just really, really careful on the throttle in all the corners. I knew that if I could just get around the first couple of laps without having any incidents, I would be OK. Then I started to get into a rhythm and started pushing to the limits a little bit.

“At the start of the race I wasn’t too much quicker than the other guys on wet tires but I think their tires really dropped off toward the end because they were searching for the wet to try and save their tires. The last couple of laps I think their tires were gone so I caught up quite dramatically and managed to catch the leader and have a dice for the win.

“It was definitely different racing to what I’m used to! It was really challenging to try and get past him. I think it was a little bit of an extraordinary circumstance because it was the last race of the year and he hasn’t won a race yet so he really, really wanted to win and I really, really wanted to win so there was zero room given. Any opportunity to go side by side there was just no room, so you know, that happens in racing. It was definitely an eye-opener and I’ve never really seen that kind of stuff before so I learned a hell of a lot in that race. I’ll definitely take some of it back to America with me!

“We touched a few times but it didn’t fall my way in the end and I ended up having to settle for second place. But it was great to get on the podium for the last race. I’ve been aiming for the podium the whole time I’ve been here in the UK and I just can’t explain how happy I am for myself, all our Team USA Scholarship supporters and the Cliff Dempsey Racing team. It’s just been fantastic to get on the podium and have such a great last race. I really, really had a lot of fun and enjoyed it."