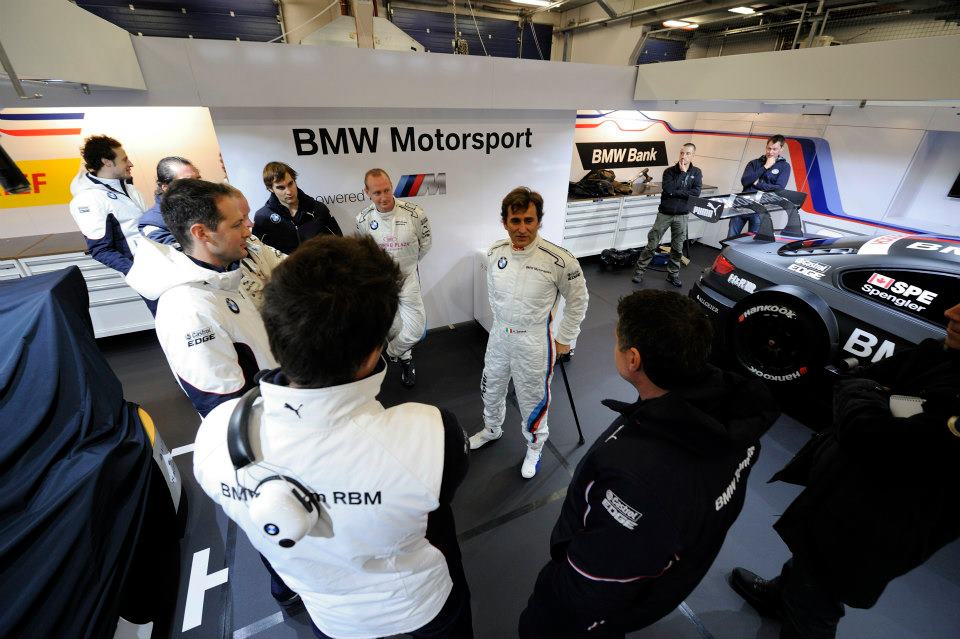 At 14:22hrs came the moment many people had been waiting for: in typically autumn weather in the Eifel region of Germany, Alessandro Zanardi (IT) left the pit lane at the NÃ¼rburgring (DE) and headed out onto the iconic track at the wheel of the BMW M3 DTM for the first time. Within just a few laps the 46-year-old had slotted seamlessly back into racing driver mode and looked more at home in the car with each of his 32 laps.

This unique opportunity was BMW Motorsport’s way of acknowledging the outstanding sporting achievements of Zanardi, who won two gold and one silver medal on his handbike at the Paralympic Games in London (GB). In keeping with the occasion, the BMW M3 DTM sported a gold livery, specially designed for Zanardi. As well as the Italian’s image on the bonnet, the roof of the car also featured the three medals, which Zanardi won at this summer’s Paralympic Games having lost both legs in an accident in 2001.

“I am delighted we have taken on this adventure successfully with Alessandro Zanardi," said BMW Motorsport Director Jens Marquardt. “For years he has been a valued member of the BMW Motorsport family and is a great role model for us all. Despite his handicap, he approaches every challenge with great optimism and passes every test with flying colors. His medals at the Paralympic Games in London are fine examples of this, as are the four race victories he achieved in the FIA World Touring Car Championship for BMW Motorsport. As we have seen today, the challenge of driving the technically complex BMW M3 DTM also proved to be no obstacle for him."

“I am overjoyed to have been given the opportunity to drive the BMW M3 DTM today," said Zanardi. “This is a very special day for me, and one I will always remember fondly. I would like to thank everyone at BMW who has helped make this special moment possible for me. It was a challenge to modify the car to meet my requirements and I am surprised just how quickly the BMW Motorsport engineers managed to complete the necessary modifications. However, the guys have done a great job. I had great fun out on the track. When I first saw the golden car I was overwhelmed. I still have a passion for racing. However, I’m not sure whether our demonstration drive will be anything more than just that, as the level in the DTM may possibly prove to be too high for someone of my age. As such, my main focus is on something completely different after today’s drive: I felt that the BMW family is still behind me and loves me. They showed that once again today."

After the final race of the DTM season in Hockenheim (DE), at which BMW sensationally won the drivers’, team and manufacturers’ titles, the BMW Motorsport engineers turned their attention to the preparations for this very special drive. While the modifications made to the BMW M3 DTM would not be suitable to be used under race conditions, they did allow Zanardi to complete this unique demonstration drive at the NÃ¼rburgring. Accelerator and clutch pedals were removed and the brake pedal was shifted to the right in order to allow Zanardi to brake with his prosthetic right leg. He operated the accelerator with his left hand on the steering wheel, while he was able to change gear by pushing and pulling the shift paddle. The pneumatic-hydraulic clutch was located on the shift panel.

Zanardi’s outing in the BMW M3 DTM was one of the highlights of the three-day celebrations to mark the 40th anniversary of BMW M. Countless international media representatives were at the NÃ¼rburgring, where they were able to experience the history of BMW M at close hand and to meet the current crop of BMW DTM drivers – for interviews and in direct competition out on the track. The journalists went up against DTM champion Bruno Spengler (CA) and his fellow BMW drivers Martin Tomczyk (DE), Dirk Werner (DE), Andy Priaulx (GB), Augusto Farfus (BR) and test and development driver Marco Wittmann (DE) in kart races and a competition to see who could perform the fastest tire change. They were also given driving lessons in a Formula BMW racing car and experienced taxi rides and demonstrations with various BMW race cars.

At the “M Night" evening event, it was the turn of the original orchestrators of BMW M’s success, as well as former and current drivers and management, to have their say. They entertained guests with fascinating stories from throughout the 40-year history of the most powerful letter in the world