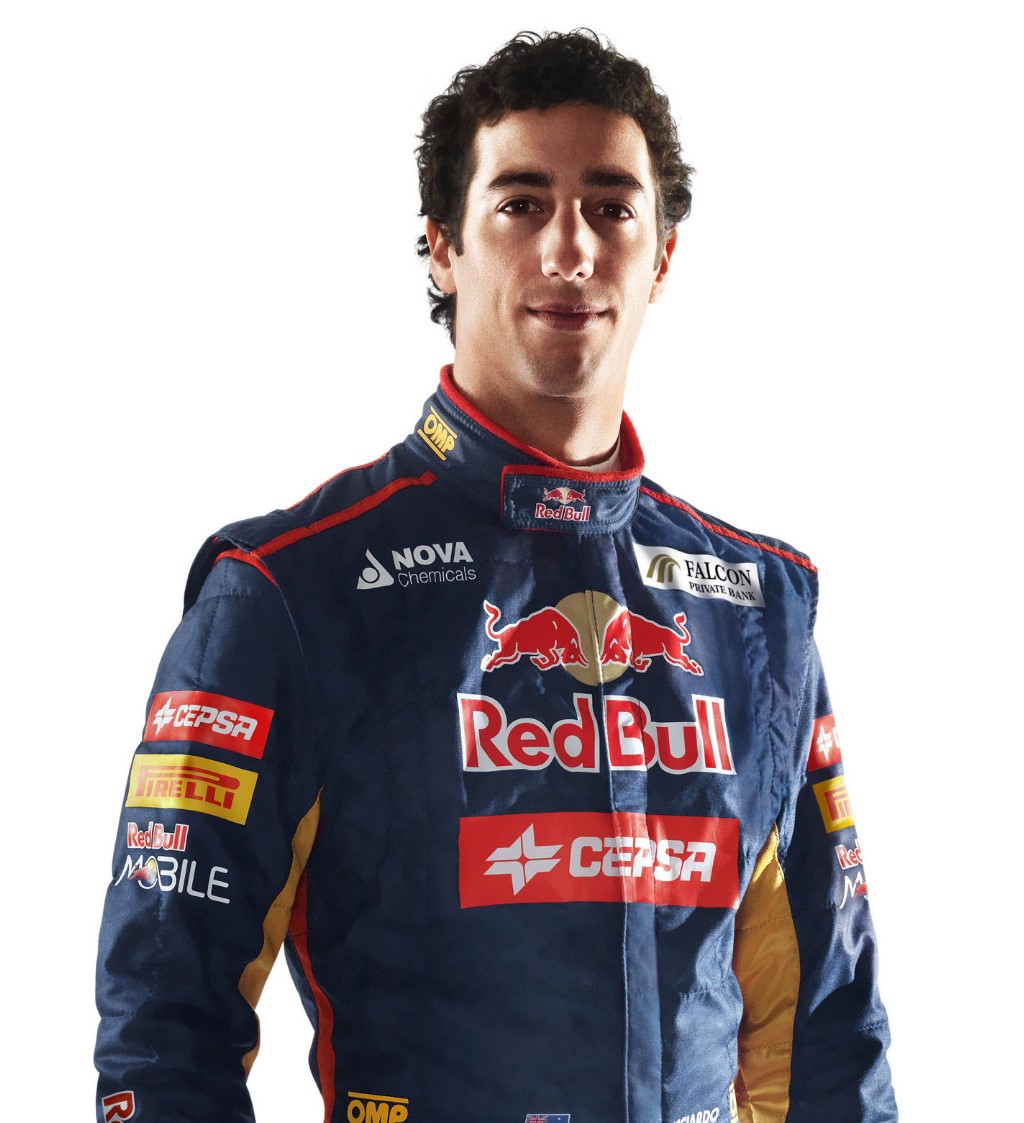 Toro Rosso keeps same drivers for 2013
(GMM) Toro Rosso is sticking with its current drivers, Daniel Ricciardo and Jean-Eric Vergne, for the 2013 season.

Australian Ricciardo, and 22-year-old Frenchman Vergne who is a year younger, moved into the Faenza based team's race seats when Toro Rosso ousted Jaime Alguersuari and Sebastien Buemi at the end of last season.

F1 float on hold until 2014
(GMM) F1's plans to float on the stock exchange look set to sit idle on the grid for some time.

Writing in the Telegraph, business journalist Christian Sylt said the sport's owner CVC has now delayed the listing at least until 2014.

"It is hard to tell depending on what happens with the markets but I think 12 to 18 months is probably a realistic time-frame," he quoted a CVC source as saying.

The source added that he hopes the Ecclestone issue "would have resolved itself" by then.

Earlier, it was believed the pair were not even on speaking terms, with Dennis reportedly furious Hamilton had decided against staying with McLaren in 2013 despite his long connection with the famous British team.

But it later emerged that they would meet for dinner ahead of this weekend's Abu Dhabi grand prix; the third-last in Hamilton's McLaren career.

"We have spoken on the phone already," Hamilton confirmed, according to the Mirror.

When asked about their recent problems, the 27-year-old answered: "Us? We didn't have a problem before.

"He's said it's no problem, he said change is good for both of us and we will always have great history, which is the truth," added Hamilton.

He insisted he does not feel guilty about leaving McLaren, agreeing that he has 'repaid' any 'debt' he might have owed the team for its long support.

"Yeah. I feel like I have," said Hamilton. "How much and how far do you go?

"Listen, it's not something I want get into, it's absolutely insignificant. It doesn't matter.

"We have won a world championship together, had an amazing journey together and I want to have a change and that's going to happen. And I am happy about it. End of story," said Hamilton.

Alguersuari offers 'notebook of secrets' to 2013 team
(GMM) Jaime Alguersuari hopes his "little notebook" can help him mount a return to the formula one grid for 2013.

Spain's El Confidencial publication said the former Toro Rosso driver is eyeing the vacancy that has just opened up at Force India.

There are plenty of other suitors for the job, but Alguersuari thinks his role as F1 tire supplier Pirelli's main test driver gives him an edge.

Indeed, with his thousands of kilometers of running in Pirelli's Renault test car this year now over, Alguersuari is reportedly still clocking up miles on the 2013 tires in the Dallara simulator.

"It's very important," the 22-year-old said, "because if you change the structure and the compound and the profile of the tires, the more practice you have the better."

The very first chance Alguersuari's rivals will get to sample the 2013 Pirellis will not be until first practice in Brazil late next month.

"I've done the equivalent distance of eleven grands prix this year," he explained, "testing hundreds of sets of tires, which gives you extra confidence to understand their behavior in the temperature ranges, balance and durability.

"At home I have my little notebook with all the secrets for next year," added Alguersuari.

Ecclestone to meet Prost over 2013 French GP
(GMM) Paul Ricard has recruited Alain Prost to lead the talks with Bernie Ecclestone about reviving the French grand prix in 2013.

Media sources RMC Sport and L'Equipe said the four-time world champion and former F1 team owner has travelled to Abu Dhabi this weekend, to step up the talks with the F1 chief executive.

RMC said Prost's meeting with Ecclestone is scheduled for Saturday.

"He knows Bernie Ecclestone very well. Frankly, he is the ideal man to represent France in this matter."

Germany's Auto Motor und Sport said the Italian team has acknowledged that while Red Bull is not far away in race pace, the F2012 is struggling primarily in qualifying.

"The problem is the rear wing," read the report. "In the DRS position it is generating too little top speed."

Ferrari president Luca di Montezemolo is quoted by Italy's La Stampa: "If we always start from the third or fourth row, then everything becomes difficult, if not impossible.

"How do you recover if you are already ten seconds behind after five laps?" he asked rhetorically.

An analysis shows that Alonso was gaining less than a 4kph boost from his conventional DRS on the straights in India, compared to almost 10kph for Vettel.

But Auto Motor und Sport said Ferrari has run out of time to introduce a Red Bull-like 'double DRS'.

The team's technical boss Pat Fry is quoted by La Gazzetta dello Sport: "We are working like crazy to bring improvements to Abu Dhabi and then all the way to Brazil.

"Starting higher up means we can put pressure on the Red Bulls. So far Sebastian has been driving away too easily."

Kovalainen still waiting for Caterham's 'pay driver' decision
(GMM) Caterham boss Tony Fernandes has admitted he "cannot discount going down the pay-driver route" for 2013, according to a report in the Guardian.

That would be bad news for Heikki Kovalainen, who already admitted in India last weekend that financial issues are clouding his future.

The main problem is that Caterham is currently sitting eleventh in the constructors' world championship, meaning that Marussia is the backmarker team looking most likely to scoop the millions in extra Concorde Agreement earnings.

Finn Kovalainen, whilst highly rated by Fernandes, brings no sponsorship to Caterham.

"Whether that's the deciding factor or not, I don't know," he said on Wednesday.

Fernandes' alternative to Kovalainen is a driver who can bring sponsorship, such as Dutchman Giedo van der Garde, who has recently been driving for the team in Friday morning practices.

It has meant Kovalainen, who turned 31 recently, has also had to go onto the driver market.

"We are looking, of course," he told The National newspaper.

"I'm not stressed about it."

However, Kovalainen admitted it is a "possibility" Fernandes will have to replace the lost Concorde earnings with the sponsorship of a pay-driver.

"If my hands are not good enough here then that's how it is, but I don't ever really fancy looking for money," added Kovalainen.

The team this week confirmed officially that Kimi Raikkonen is staying next year, but the announcement made no mention of Lotus' plans for Frenchman Grosjean.

While often impressive, Grosjean has had a tumultuous 2012 season which culminated in his Monza race ban, at the end of a spate of early-race crashes.

But team boss Eric Boullier hinted earlier this week that, after a better couple of races in Korea and India recently, the 26-year-old "has his place" in F1.

And now, speaking after the Raikkonen re-signing, Boullier said he thinks Grosjean is recovering from his mid-season slump and a period of caution in Korea.

Referring to last Sunday's Indian grand prix, he said: "Compared with Korea when he had to be slightly more cautious, he is now back in the mood of racing and fighting.

"It's good and I think he is on the way to recovery and has really shown exactly why he deserves to be where he is."

F1's control tire supplier has to specify four dry compounds at the start of the season, with two being selected for use in each grand prix weekend.

This system was introduced when Bridgestone became sole tire supplier in 2007 and has continued under Pirelli.

But Paul Hembery, Pirelli's motorsport director, believes that four compounds cannot cover the full range of track surface, configuration and temperature conditions faced over the course of a Formula 1 season.

"With four choices, you're always going to be slightly compromised.

"As a minimum, we could do with eight compounds, with low and high [temperature] working ranges in each of the four levels [super soft, soft, medium and hard] that we've got now."

Hembery confirmed that there had been no discussions to expand the number of compounds and Pirelli is currently working on finalizing four for use in the 2013 season.

But should the Italian firm remain in F1 beyond its current contract, which expires at the end of 2013, Hembery confirmed that it would discuss expanding the compound range with the teams and the FIA.

Hembery also admitted that there is an inevitable tendency for race strategies to become more predictable as the season goes on.

"The teams improve all of the time," said Hembery. "They are trying to reduce wear and degradation and we're trying to increase it so we are working in opposite direction.

"The engineers in these teams are brilliant. At the start of the season, when there was a lot of comment about the tires, the engineers weren't making comments.

"They realized that 'if I can dominate this technical challenge, I'll have an advantage'.

"We'll change a lot of things next year. Will it be enough? We'll wait and see. But hopefully we'll have an exciting start to the season." Planet F1

Lotus works on improvements for exhausts
Happy with the latest progress for its Coanda exhaust solution, Lotus is now aiming to improve the component for low-grip corners. Directing air upwards, the design takes advantage of the Coanda effect: airflow’s natural tendency to curve towards the ground.

As the air curves downwards, its first contact patch is the rear diffuser of the car which thus generates extra downforce. Although the E20s of Kimi RÃ¤ikkÃ¶nen and Romain Grosjean lose some straight-line speed, as the previous exhausts had helped to maximize power, the latest version does reduce lap times overall.

“The Coanda exhaust is now much better understood," Grosjean explains. “We have to do some work to try to get better results in low grip conditions, especially in qualifying – which is somewhere that I think we can improve – and then in the race the car is just very, very good as usual. So we will continue working on it and try to get some good results in Abu Dhabi.

“Mainly I would like to start the weekend better than in India, where FP1, FP2 and FP3 were not good for me. I didn’t get the right feeling with the car immediately and it set us back for the whole weekend. I think we need to put that in order for Abu Dhabi. Our aim will be to try to start well, work hard and go into qualifying with more knowledge."

Grosjean, who lost ground when he was banned from starting in Italy, is now only three points behind Nico Rosberg for seventh place in the Drivers’ Championship.

Since the desert circuit debuted in F1, overtaking has been somewhat impossible at times; this was best highlighted in the 2010 championship finale when both Fernando Alonso and Mark Webber, title contenders, were unable to pass Vitaly Petrov.

The first DRS zone comes on the long back straight after the hairpin, with the detection beam placed on the entry to Turn 7. The second activation zone is the run down towards Turn 11, where Alonso went off-track when attempting to overhaul Petrov.