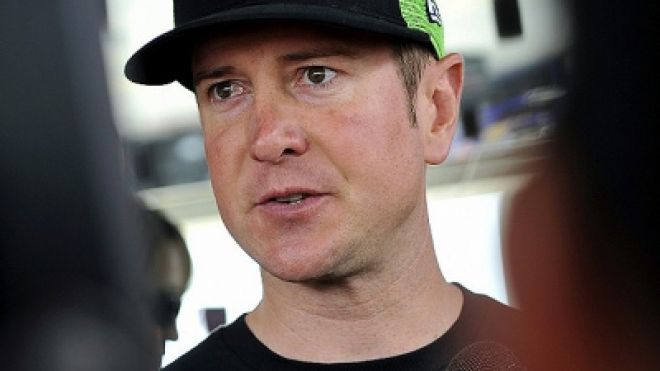 NASCAR Sprint Cup Series driver Kurt Busch announced today on SPEED’s NASCAR Race Hub that he has taken over as driver of the No. 78 Furniture Row entry for the 2013 season, moving on from Phoenix Racing.

SPEED NASCAR Race Hub host Steve Byrnes sat down with Busch in an exclusive interview about his new ride. Here is what he had to say about 2013.

Kurt Busch: This has been a warm and fuzzy type of day; I did sign a new contract today and I kind of wanted to make you guys aware of my next year’s plans. I’m going to be with Barney Visser and Furniture Row Racing. I wanted to give a SPEED exclusive here.

Busch: Me, and my brother, had a lot of fun this year, it was really a fun experience to race with him; to race with (James) Finch. But Barney Visser (Team Owner) and Furniture Row, I wanted to break it here at the Hub and all my friends at SPEED.

Byrnes: I’m assuming you had some other offers, you’re champion, what was it about that situation that you liked best? That fit you best?

Busch: Their commitment. Barney Visser, Joe Garone (General Manager), the whole gang, bringing Todd Berrier (crew chief) in there this year showed me that these guys are for real. They want to go to the next level, and they are committed to Sprint Cup Racing. The family atmosphere that Barney talked to me about, right when I first showed up was his most important thing. It was great to talk with other owners this year. Different sponsors. So I’m committed to this program – Furniture Row – and I’m excited about it, so 2013 is going to be great.

Byrnes: You won the very first championship in The Chase format, is it tough for you not to be a part of it these days? Clint Bowyer jokingly said, “If you’re not in The Chase, it’s like you’re not even out there." I know you want to get back to that level.

Busch: That’s what you have to do when you’re a guy on the outside looking in. Move your chess pieces around, and prepare your program to make The Chase. That’s what I believe 2013 is going to be about with this new car, a new team and a new opportunity. I’ve been in The Chase six out of nine years. Those six years, I’ve went into all six of them with a legitimate chance of winning the championship. You can rank yourself with your chances of getting into The Chase, but you have to rank yourself with those chances of winning the championship. That’s the most important thing.

Byrnes: I have honestly not been to their shops out in Colorado, but I’ve heard that it’s a real hidden gem. They are not hurting for resources.

Busch: Commitment and the whole program, tied in with RCR (Richard Childress Racing), we’re getting Childress motors, engineering support, Chevrolet is backing the program out there with the aerodynamic side of it. I didn’t want to talk about it much today, I wanted to create the tailspin, and we’ll see how the next few weeks go…

Byrnes then got the reaction of SPEED NASCAR analyst and former crew member, Matt Clark. Here is what he had to say…

Byrnes: Why do you think Furniture Row is a good fit for Kurt Busch?

Matt Clark: First of all, Furniture Row Racing is a hidden gem in the garage. It’s a great organization with great ownership, great resources. They put the right people in the right places. You heard Kurt Busch talk about Todd Berrier… they are deep there, they are out in Denver, but honestly, they are a top-notch organization, and bringing Kurt Busch to that organization, nothing against current drivers now, but what they have going on with Kurt right now is a big deal.

Byrnes: He mentioned briefly the relationship that Furniture Row has with Richard Childress, there’s a very strong bond there that can only get stronger.

Clark: Right. For all intents and purposes, Furniture Row Racing – the 78 – is really the fourth car at RCR. They have an open-book policy, it’s that strong. Keep in mind, Kurt told me off camera, he will be allowed to be in the RCR shop when he’s not in Denver. He has access to the notes, access to the competition, getting access to anything he needs to be successful. When you talk to the Furniture Row folks, they consider themselves a satellite team, of sorts, for RCR. It’s definitely a great strategic relationship.

Byrnes: He’s one of the most articulate drivers in the sport, but over the years, his relationship with the media has strained a bit. How does he move forward? Does he need to repair any of those relationships?

Clark: Let’s back up one step. He’s gotten a lot of counseling from Richard Childress Racing. Now, Richard is a little of a hot head, “Hey, hold my watch." But they understand each other, so he’s really relied on Richard as a confidant and a mentor. So moving forward, I think he realizes that he’s not strong in the media. I think he had a phobia with a lot of people around him with mikes in his face. Honestly, if it was up to me and his media plan, nothing would go to Kurt without going through, say a six-foot-six ‘Brutus.’

Byrnes: He responds emotionally. We love emotion in any sport.

Clark: Drivers in general need that decompression time. He just doesn’t do well in the heat of the moment. He does better one on one, when he’s in the chair with you. It’s a situation where they have to, in my mind, craft a very careful media plan, so he begins to repair some of the bridges that he’s burned a little bit with some of the folks. I see some upside and potential coming here.