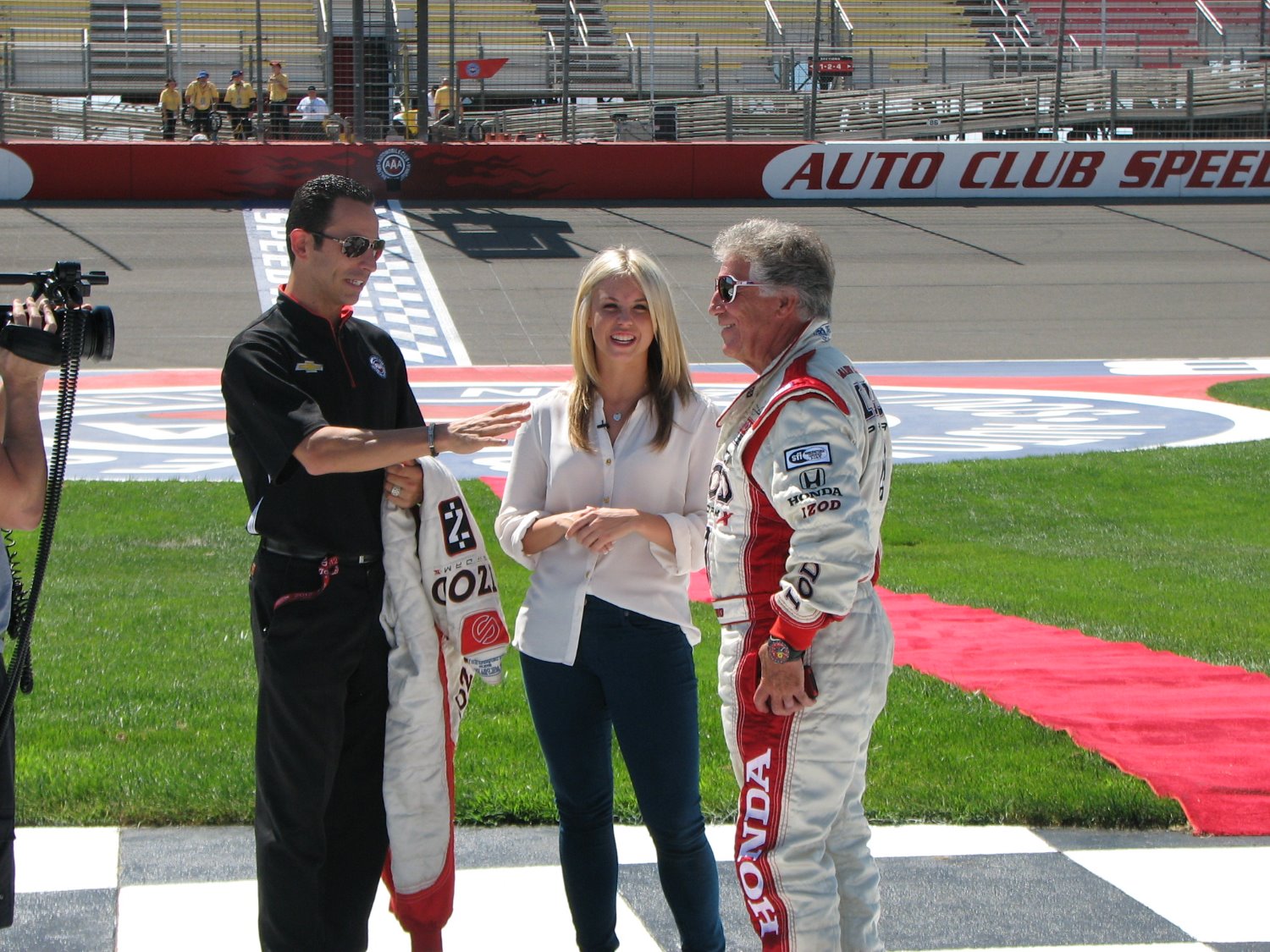 Her blonde locks cascade from the unleashed helmet as Helio Castroneves arrives on cue to assist Chelsie Hightower from the Indy Racing Experience two-seater.

"What you do is crazy," she relays above the din of the engines to her "Dancing With the Stars: All-Stars" partner following a high-speed ride with Indy car legend Mario Andretti at the wheel. "Crazy."

Born in Las Vegas and raised in Orem, Utah, Hightower has five older brothers who were alternately playful and protective. For the autumn run of the ultimate celebrity dance party, Castroneves is a surrogate older brother from Brazil.

Castroneves rejoins the drama, glamour and glitter of the ballroom when ABC's "Dancing with the Stars: All-Stars" premieres Sept. 24 at 8 p.m. (ET).

Castroneves and Hightower laugh and joke about her ride on the 2-mile Auto Club Speedway and the speeds of the IZOD IndyCar Series car that that Castroneves drives. The rapport is genuine and relaxed, which the veteran of eight "Dancing With the Stars" seasons notes is beneficial during long hours of rehearsals and is projected on the dance floor to millions of viewers.

"One of the keys to 'Dancing With the Stars' is keeping it simple," Hightower says before rehearsal. "Another is truly enjoying yourself, and Helio attacks things like his racing with a lot of ambition and a lot of hard work. But he also knows how to have fun and that's a great combination for 'Dancing With the Stars' and a great combination for success.

"(Also) it's not the same as it was before. All the contestants have done well on the show so they have that confidence and they're not going into it blind. That's huge for them to relax and let go and give it their best."

The effervescent Hightower, 23, started dancing when she was 9 years old in an after-school program, and won her first national title when she was 11. In 2005, she and her ballroom dance partner represented the United States in Latin Style at the Blackpool (England) Dance Festival. Later in the year, she and her dance partner represented the United States at the Worlds for the Standard style of ballroom.

Hightower made her TV debut on "So You Think You Can Dance" in 2008, and joined the cast of "Dancing With the Stars" the next year with bull riding champion Ty Murray as her partner. The physical and mental discipline of athletes (she also danced on the show with snowboarder Louie Vito) such as Castroneves is another element that carries potential for success during the show's two-month duration.

"It doesn't always mean that they're going to have more talent than other people, but they do understand hard work," she says. "So when I say, 'OK, let's do it again' and 'Again,' they understand that it's part of the process. They have that work ethic and drive to do well and be successful."

Success on the show came to Castroneves and professional dance partner Julianne Hough in the fall of 2007 (Season 5) as they won the competition through a combination of judges' voting and TV viewers' support. The format (online, texting and phone voting) is the same this time around, and the race car driver has transitioned naturally from 220 mph on the racetrack to the Quick Step.

"She is definitely an incredible talent and I'm extremely happy to have her as my partner," Castroneves says. "It's like a new racing team. She pushes to the limit. What I like most about her is her vibe, the attitude, the way she explains. She likes to run through everything and then go through sections. For me it's good because I kind of know where I'm going first because the steps are similar to five years ago, muscle memory is working, so we're able to speed up the process and understand what we need to do.

"Sometimes when I see she's changing something, I'm like, 'Please, don't do that.' But I believe that's the strategy for this season and that's why she's pushing me so hard so we start on a good note and keep growing from there."

They'll perform either Foxtrot or Cha Cha Cha in Week 1.

"(The performance) will bring out his personality, which is one of his biggest strengths," Hightower adds. "We have a lot of technical things as well. We're really going to hammer out that technique because this season it's not only going to be about performance but about the overall package because we have so many great dancers. We're all going to need to deliver with technique, with performance, with choreography and chemistry.