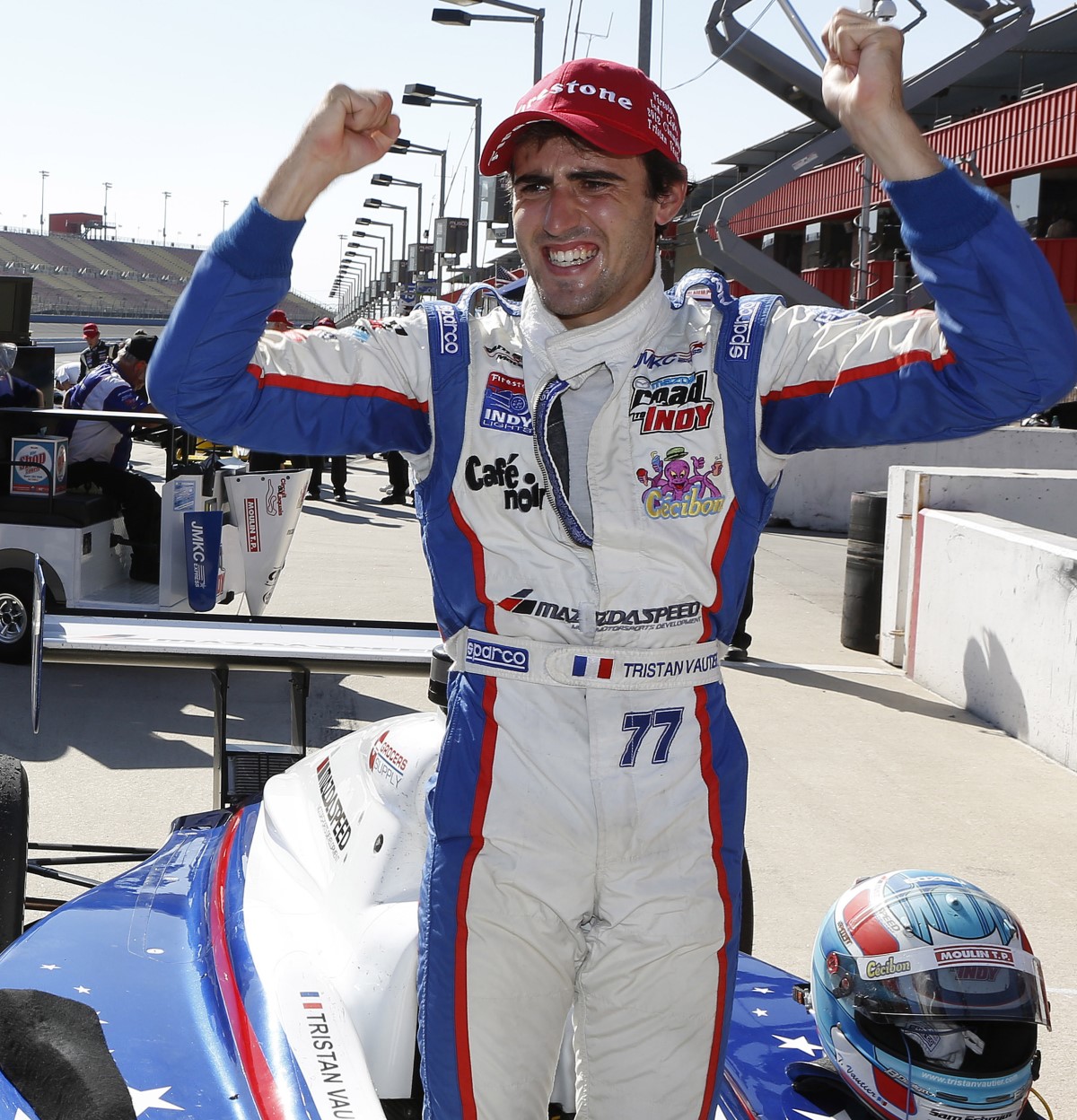 Vautier finished fourth in the 50-lap race on Auto Club Speedway’s 2-mile, D-shaped oval to clinch the championship. He edged out teammate Esteban Guerrieri for the crown by just eight points at Auto Club Speedway in Fontana, Calif.

Though Guerrieri finished third and ahead of Vautier, he could only gain three points on his teammate. Guerrieri has now finished second to an SSM teammate in the Indy Lights championship in back-to-back years. He was runner-up to Josef Newgarden in 2011.

As they were all season, Guerrieri and Vautier were never far from each other on the track Saturday. The pair ran side-by-side in second and third for the first four laps of the race before Vautier pulled away from Guerrieri.

Displaying the patience he has practiced all season, Guerrieri stalked Vautier and finally passed his teammate on Lap 39. The pass was only for third place, however, as David Ostella had moved into second several laps earlier.

CARLOS MUNOZ (No. 26 Team Dialy-Ser, winner Auto Club Speedway Foundation 100): "No words to say, my last race of the season win so I'm really happy with the Andretti team giving me a great car. For being my rookie year, finally I have my second win, and an oval win. So another thing I am prepared for next season to fight for the championship. I have to congratulate Tristan Vautier on winning the championship."

DAVID OSTELLA (No. 22 TMR-Global Precast-Xtreme Coil Drilling, finished second): "That was amazing. The track definitely gripped up a lot. I expected the tires to be a big issue but our setup was just amazing. The guys did an amazing job. The car was great the whole time. I had no issues with setup at all and either with tire wear. Phenomenal (race). I'm so happy for the team, we definitely deserved this. To have this happen on the last race is just amazing."

ESTEBAN GUERRIERI (No. 11 Pistas Argentinas/SSM with Curb-Agajanian, finished third): "The race was quite the same from halfway race onwards. It didn't have much we could do from mid-race on. From the beginning we tried to place ourselves but they had more than us. There was nothing we could do there. I tried to save my tires, I thought the vibration was going to be more but in the end I tried to go flat out and that's all I could do."

STEFAN WILSON (No. 24 Fan Force United): "It was a good race. I'm very pleased to bring the car home safely, and roll it back on to the trailer tonight. To have no issues all weekend was great, and finishing P6, moving up from 11th, we probably got the hard charger award. I haven't been in a car in over a year, so to jump back in it and get on this 2 mile oval was a bit of a baptism by fire, but we took some really logical steps making the car better. We chipped away at it, kept improving it slightly bit by bit, and eventually we got a good racecar for the race today. We just needed a little bit more speed and a little bit more time to work on the car. We didn't have the test day here together like everybody else here did, so we were a day behind. I just can't thank the team and Jacked Up Energy enough for giving me the opportunity, and for all the hard work that went in to making this possible. We're thrilled to be able to give them a good result, and are really thankful for their support. Hopefully my run today will have more people liking the team and getting on board with Team Jeremiah."

JUAN PABLO GARCIA (No. 76 Freightliner Jeffrey Mark Motorsports): " "It wasn't the result I was expecting after having such a good day yesterday. We made some changes last night to the rear of the car, but it gave me a lot of push on the exit of Turns 2 and 4. I was not able to keep pace with the leaders with the push. I'm happy that I finished the fourth oval of my career though. I gained a lot of valuable oval racing experience in this race but I'm still not happy with the result, especially since it's the last race of the season. Everything that I learned this year I was able to use to help me in today's race, but it's clear that I'm still learning about ovals."

TRISTAN VAUTIER (No. 77 Mazda Road to Indy/SSM with Curb-Agajanian, finished fourth; 2012 Firestone Indy Lights champion): "I came over to the USA because of the Mazda Road to Indy. I was struggling getting up the ladder in Europe, and I knew that if I was coming over here and was able to win the Star Mazda Championships I would be able to get into the bigger cars. That was the goal. I won the championship last year. I cannot be thankful enough to Mazda for what they do for young drivers. Obviously, you have to earn it. You have to win championships. But it really rewards the winners, and you know, they don't pick you up because they like you the pick you up because you earned it. You have to win to get into this scholarship system so I'm really thankful to that, I wouldn't be here without them."

VICTOR CARBONE (No. 3 Mav TV/Nevoni/SSM with Curb-Agajanian finished fifth): "I had a clean start. Managed to get out of trouble from then on. I just tried to save my tires. Just to be conservative for them. And I started to pick one by one. Once I got to fifth, everyone was spread out. There was not much action in the last 1/3 of the race. Managed to take home another top five. It's a good result. My teammates finished third and fourth. The team was lacking a bit of speed this weekend. They'll look at the data and work and see what we're missing.

OLIVER WEBB (No. 7 Lucas Oil/Sam Schmidt Motorsports finished fifth): "Beginning of the race was really good. I had a good start. I had a good position. I was battling with Gustavo (Yacaman) in the beginning. That was really good. I think maybe I just pushed too aggressively at the beginning. (David) Ostella was in my mirror. He was just taking the high line buying his time. When he got past me he managed to pull away and then I was just lifting and struggling to have some grip on the exit at two and four. I think I just pushed too hard at the beginning."