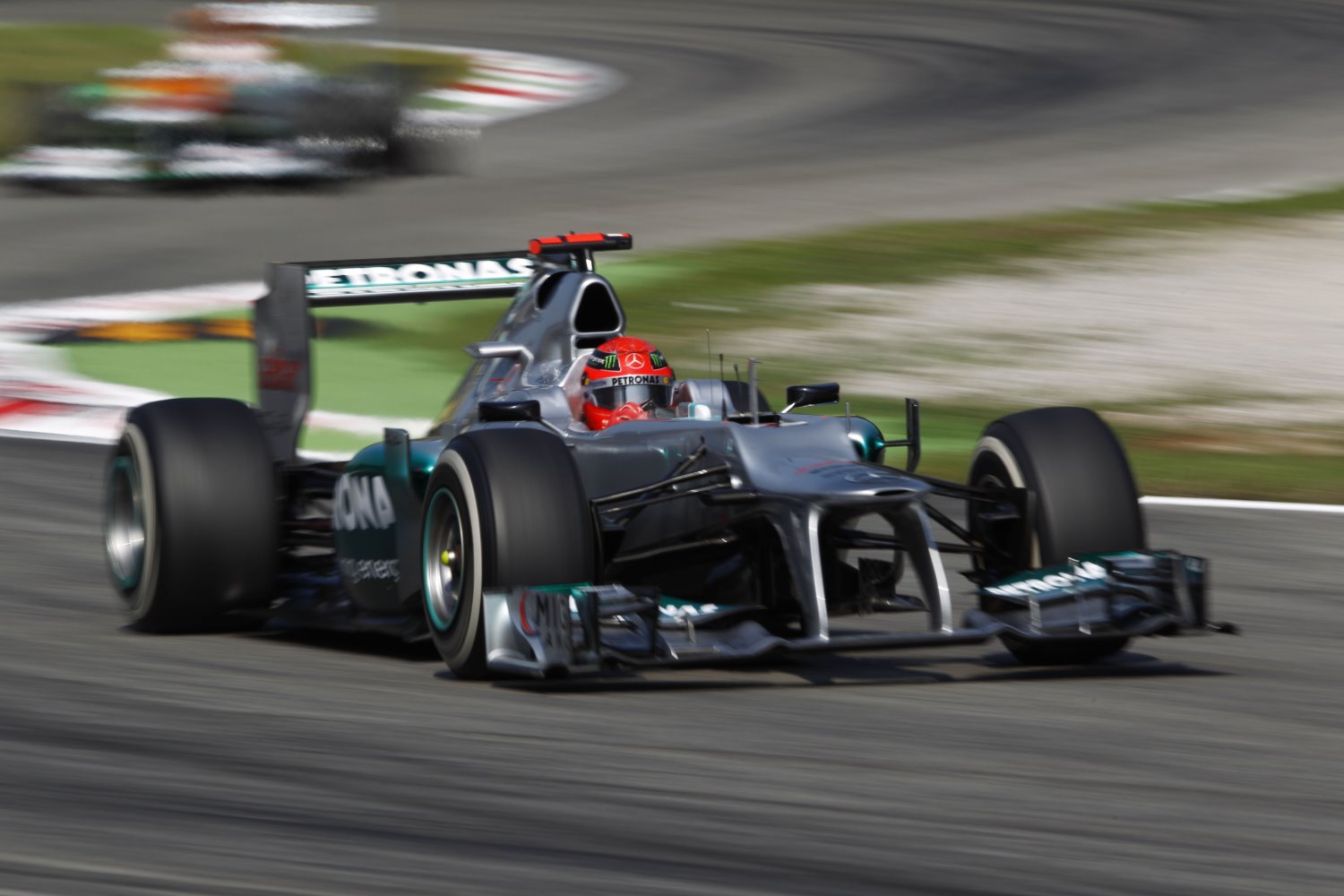 During the recent Belgian grand prix weekend, we reported that the German squad had upped the ante on its innovative 'double DRS' concept of 2012 by testing what could be described as a 'triple DRS' iteration.

Mercedes pioneered the straight-line speed-boosting idea, but at recent grands prix Lotus has been trying to get a development of the concept up and running.

The 'triple DRS' is Mercedes' answer to the Lotus development.

Asked how it works, team boss Ross Brawn smiled at Spa: "We'll leave that up to everyone's imagination."

Auto Motor und Sport explained that the system is able to shed drag from three separate areas simultaneously, at both the front and the rear of the single seater.

"Neither in Spa nor at Magny Cours was the system complete," read the German report.

As the young driver test kicked off at Magny Cours on Tuesday, test driver Sam Bird was at the wheel of the updated W03, also featuring a new 'Coanda' exhaust for the first time.

The F1 grapevine is currently alight with speculation the 2008 world champion – who flirted with Red Bull until the energy drink-owned team re-confirmed its existing lineup for next season – is about to jump ship to Mercedes.

Boss Horner told Austrian television Servus TV he is relieved Red Bull is not caught up in the rumors.

"But it is interesting to look at all the games and see who will be sitting in the seats when the music stops," the Briton reportedly said.

"If you believe Eddie Jordan then Hamilton's going, and if you believe Bernie, then Schumacher is going back to retirement," said Horner.

"As always there's a lot of talk, but when the music does stop, I don't think much will have changed," he insisted.

Former F1 driver Christian Danner agrees with Horner that his "gut feeling" is that Hamilton will stay put.

"The Hamilton story is about his position at McLaren — about how he can market himself to the world and what rights he gets.

"But if he listens to his racing heart, he will stay at McLaren, where he has the best chance to be world champion again. Period," he added.

The now 22-year-old was dumped by the energy drink company after serving in 2010 as joint F1 reserve driver with Daniel Ricciardo.

It was a huge setback for New Zealander Hartley, but this week for the young driver test at Magny Cours, he is wearing silver colors in the Mercedes garage.

The Brackley based team said Hartley has actually been a team simulator driver since 2011.

And a statement on Hartley's official website said that "provided everything runs to plan during the first two days of the (Magny Cours) test, (he) will drive the W03 on Thursday".

"Two years ago it was difficult to believe I would have another chance to drive for a top formula one team," said Hartley.

"I feel much more prepared in comparison to my first formula one test in 2008 when I was just 18 and fresh out of Formula 3.

"Since then I have learnt a lot about both myself and the business of racing, and I will do my best to make the most of this opportunity."

Heidfeld 'not yet' ready to give up on F1
(GMM) Nick Heidfeld insists he is "not yet" ready to move on from formula one.

The veteran German contested more than 180 grands prix over a decade, but last year lost his Renault (Lotus) seat after standing in for the injured Robert Kubica.

On that sudden ousting, 35-year-old Heidfeld admits he is still angry.

"It takes a while to work through that process, and it's a process that is still taking place," he said, admitting it was a "very difficult time".

"It was not the farewell that I imagined."

Heidfeld has had several outings in other racing spheres since leaving F1, but reveals he is "just now starting to hold some talks" about 2013.

His preference is F1.

"I am not yet at a state where I would say I will try something else," he told DPA news agency. "For that I love the sport too much.

"But if it was that easy (to return to F1), then I would have. So it will not be easy, but on the other hand, as we have seen in recent years, there is always the unexpected.

"I wouldn't just go to any team though, and I know that the chance of going straight to a top team is quite small. It's also pointless to be a reserve driver, because you never drive.

"So if I didn't have the prospect of success, then I don't need it anymore."

Heidfeld holds the record for the most career podiums without a single grand prix win.

"Clearly there are better records to have," he smiled. "But there are many others who have never been in formula one let alone had a podium, so it's still special."

Perez at Monza 'best drive of 2012 season' – Lauda
(GMM) Sergio Perez's second place at Monza was the standout drive of the 2012 season so far.

That is the view of legendary triple world champion Niki Lauda, who honored the young Mexican by taking off his famous red cap before interviewing Perez on the podium last Sunday.

"Perez drove like a god," the Austrian told Swiss newspaper Blick. "Unemotionally and without error.

"No driver has impressed me more this season at a grand prix."

Lauda will not, however, be drawn into speculation 22-year-old Perez's next move is to become Fernando Alonso's Ferrari teammate in 2013.

And the latest reports suggest Perez might also be a candidate to succeed Lewis Hamilton at McLaren.

"Clearly Perez has the potential for bigger things," said 63-year-old Lauda, "but that doesn't mean I'm going to start commenting on every internet rumor."

Lauda is just as impressed with Perez's current team, Sauber.

Asked what is so good about the C31, he explained: "A simple design. Every team could follow the example of Swiss quality," Lauda smiled.

"And with Monisha Kaltenborn at the helm, she has everything under her control, so I take off my cap to her as well."

Indeed, chief executive Kaltenborn thinks the Hinwil based team's next step is right to the top of the podium.

"It is difficult to be sure that we will win, because you need so much to come together to finish a race in first place, but I think we are close," she is quoted by Brazil's Totalrace.

"If we can do a race completely without mistakes, I am sure that it can happen."

Only two F1 greats have won three or more championships on the trot — Juan Manuel Fangio and Michael Schumacher.

German Vettel has the chance to do it this season, but F1's legendary Austrian Lauda thinks the Red Bull driver's hopes are now all but dashed with seven races to run.

"These quality problems have cost Vettel the title," he told Osterreich newspaper.

Three-time world champion Lauda, 63, was referring to the alternator failures that cost Vettel victory at Valencia, and valuable points last weekend at Monza.

"An error can occur, but it needs to be fixed immediately and must not occur again," insisted Lauda.

Vettel is now 39 points behind championship leader Fernando Alonso, meaning he needs to score an average of 5.6 points per race more than the Spaniard to win in 2012.

"Theoretically the championship is not lost for Vettel," said Lauda, "but in practice (it is) …

"Alonso is clearly on course for the title, Ferrari is very consistent," he added.

Lauda also acknowledged that McLaren has the best car at the moment.

"They have the strongest car, and their speed of development is also the best," he said.

Kaltenborn: Urgent need for F1 cost-cutting
Sauber are the latest team to stress that Formula 1 must lower its running costs as soon as possible. Last week, FIA President Jean Todt emphasized that the sport could lose some of its smaller teams should the budgetary concerns not be addressed swiftly.

After Max Mosley’s idea of a budget cap fell through when several manufacturers conspired against it in 2009, the teams’ spending is now dictated by the Resource Restriction Agreement (RRA), however this policy has been criticized on numerous occasions. F1 governing body the FIA is attempting to police the RRA for future years, but Red Bull are against the idea.

Monisha Kaltenborn, CEO of the Sauber F1 Team “There is an urgent need for action on this issue," Monisha Kaltenborn, CEO and future Team Principal of Sauber, says on Wednesday. “For the majority of the teams in Formula 1 the financial challenges are huge. The Sauber F1 Team is very much in favor of introducing measures to push down costs further still.

“First and foremost, we hope that the Resource Restriction Agreement will be implemented and monitored effectively from 2013 onwards. It is also important that engine costs from 2014 are kept at a sensible level for the privately-run teams.

“A constructive move here would be to draw up a roadmap setting out the direction of technical development over a period of several years. That would make planning easier and reduce costs substantially."

The RRA will remain a hot topic between teams on the run-up to 2013.

Pirelli announces tires through Indian GP
Pirelli has announced its tire nominations for the Japanese, Korean and Indian Grands Prix.

The Formula 1 tire supplier said it will take the hard and soft rubbers to the Suzuka race, the 15th round of the championship.

The same compounds will be used in India.

For Korea, Pirelli has chosen the soft and super soft compounds, the same that will be used in the Singapore Grand Prix next weekend.