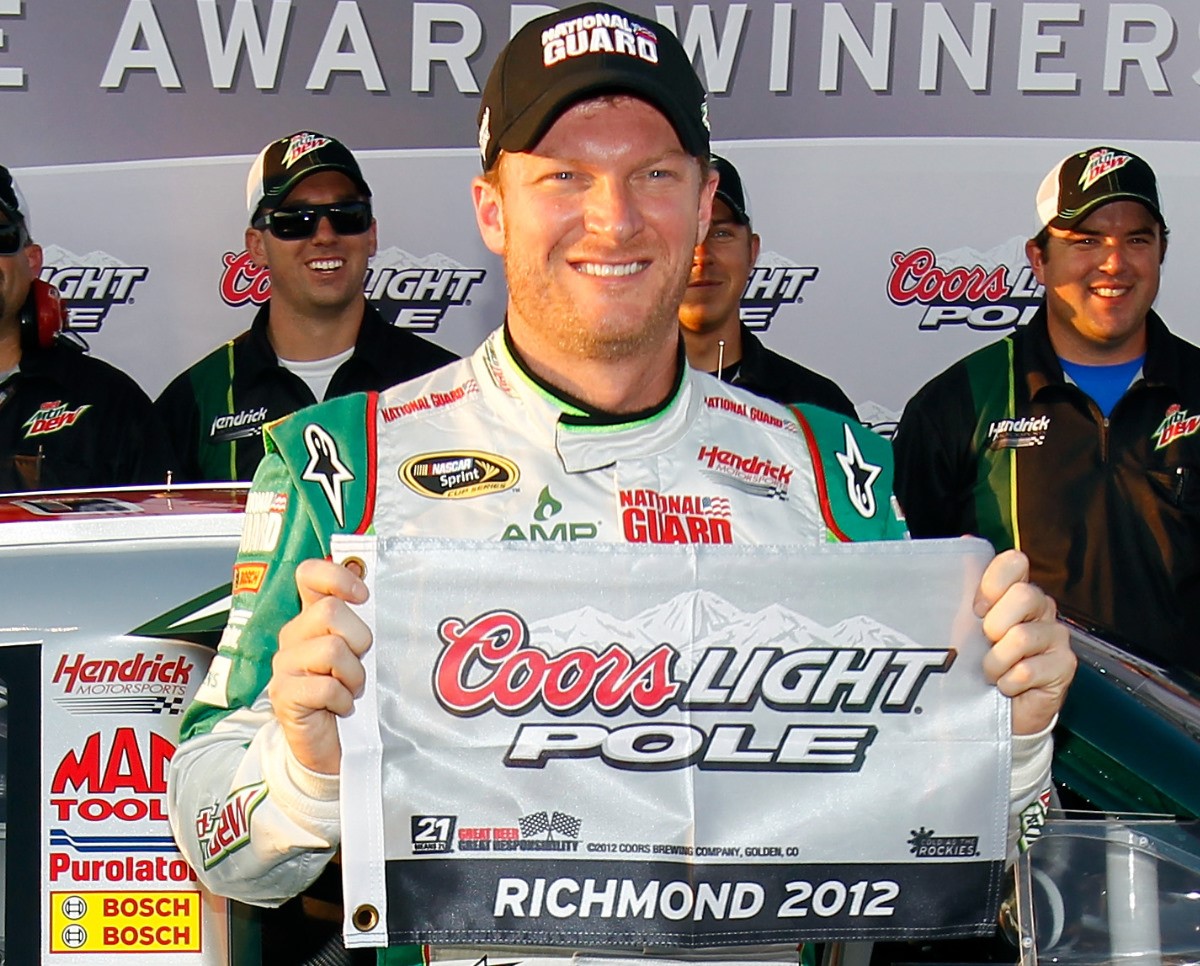 Dale Earnhardt Jr. did exactly what was necessary to win the pole for Saturday's Federated Auto Parts 400 at Richmond International Raceway — and teammate Jeff Gordon did more than enough to make Kyle Busch very nervous.

The 44th of 45 drivers to make a qualifying attempt in Friday's time trials, Earnhardt toured the three-quarters-mile speedway in 21.526 seconds (127.023 mph) to claim his first Coors Light Pole Award of the season, his first at Richmond and the 11th of his career.

But it was Gordon who put himself in position for a last-ditch attempt to qualify for the Chase for the Sprint Cup with a second-place run at 126.981 mph. Gordon can dislodge Busch from the second provisional wild-card position by winning the race (if Tony Stewart remains in the top 10 in the standings) or by beating Busch by more than 12 points, if no wild-card contender with one victory wins on Saturday night.

Busch posted the 15th-fastest time on Friday and will start the race 13 positions — the equivalent of 13 points — behind Gordon, setting up a dramatic shootout for the final wild-card spot.

"I think [Friday] was a big mission accomplished for us," Gordon said. "We were very solid in practice all day. I know exactly where I left a little bit out there in [Turns] 1 and 2. I got everything out of it in 3 and 4. But in 1 and 2, I knew I got down to the yellow line too early and just couldn't get back to the gas as hard as I needed to.

"When you do that, you know that there's somebody out there that has a shot of getting you. Second is still a fantastic effort. We had a great practice [Friday], and our car was solid, so [I'm] pretty excited about this race [Saturday]."

Earnhardt, who already has qualified for the Chase, saw the efforts of his No. 88 team to improve the qualifying performance pay off.

"We've been working the last two years to improve … and this year we made some gains," Earnhardt said. "It feels good to get a pole position and know that we're doing something right there.

"It gives us a good starting spot for [Saturday]. We feel pretty confident about the car after practice [Friday], and starting up front is an advantage. I'm happy that we're performing well and look forward to the race."

DALE EARNHARDT, JR., NO. 88 DIET MOUNTAIN DEW/NATIONAL GUARD CHEVROLET, POLE WINNER: ON HIS LAP: “It feels good. I’ve not really been the best of qualifiers the last couple of years. We have a lot of improvements we’ve made this year. It feels good to get a pole."

HOW IMPORTANT IS A WIN HERE TOMORROW NIGHT? “I think everybody wants to get the win to kick the Chase off, and go into the Chase with a lot of confidence. It’s a fun race track; we love running here. I think we’ll have a good car tomorrow."

JEFF GORDON, NO. 24 DRIVE TO END HUNGER CHEVROLET – QUALIFIED 2ND: DID YOU GET EVERYTHING OUT OF YOUR LAP AND THEN SOME? “I did in (turns) three and four. I got (turns) three and four great coming to the green (flag) and coming back to the white (flag). I just didn’t quite get through (turns) one and two the way I would have liked to. I actually got down to the yellow line a little bit earlier than I wanted to. I could have carried a little bit more speed in there. There is some speed left out there, but still a solid day for this Drive To End Hunger Chevrolet. I love having Chase credit card services on board and all the support of this Drive To End Hunger program. We will just see where we end up. It has been a solid day, we have a good race car, from here on out we are guaranteed a top 10 spot and we will see where we end up."

REGAN SMITH, NO. 78 FURNITURE ROW/FARM AMERICAN CHEVROLET – QUALIFIED 3RD: YOU SAID THE SUN GOING INTO (TURN) THREE IS MAYBE THE BIGGEST ISSUE FOR GUYS RIGHT NOW? “Yeah, every time we come here and qualify it is that perfect time of the day where the sun is right in your eye. If anything I think that is going to be the biggest issue, but good lap for the Furniture Row Chevy. I was real happy with it. I didn’t quite get what I wanted that second lap, but the first lap was enough. We are proud of that. Hopefully it stays up in the top five somewhere. Nonetheless, these guys have been working really hard. The guys in the shop have been working really hard. Todd Barrier came on board a few weeks back with us and that has been a good change, a lot of excitement out of this team."

JIMMIE JOHNSON, NO. 48 LOWE’S CHEVROLET- QUALIFIED 5TH: WHAT WAS THE DIFFERENCE THERE ON YOUR LAP? YOU NARROWLY MISSED THE POLE: “I can promise you it wasn’t from a lack of effort. I didn’t make my second lap because I was pinned on effort level there (laughs). Great lap, it’s hard to think that it’s going to stay up there in the top three being as early as it is. For the time of day good lap, picked up right around a second I guess from practice. Things feel good so we will get this Lowe’s Chevy dusted off and ready to go for tomorrow night."