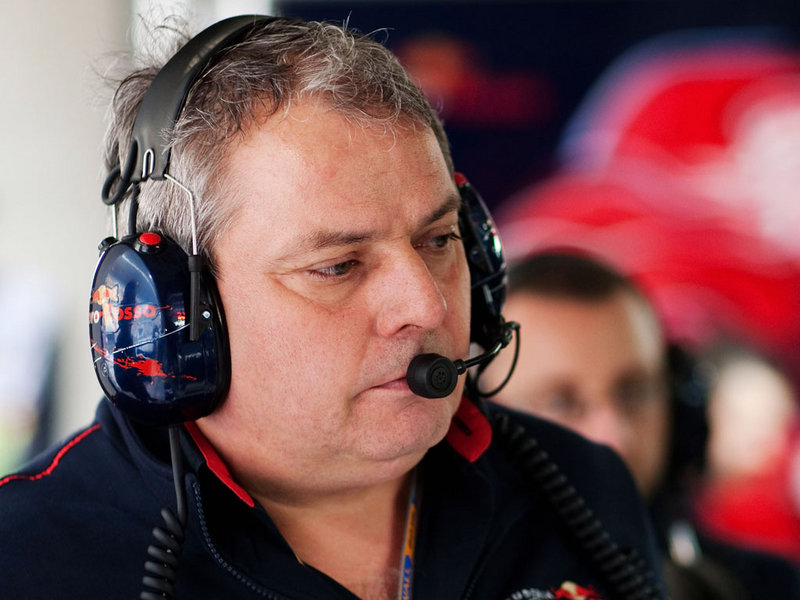 We reported last weekend that his likely successor, former Sauber and Force India man James Key, will start work at Faenza this week.

Speculation suggested that 'holiday' coincided with 40-year-old Briton Key's serving of his mandatory 'gardening leave' before he could join Red Bull's second team.

Toro Rosso announced on Wednesday that Ascanelli has resigned.

"We would like to thank him for his efforts and wish him all the best for the future," said team boss Franz Tost.

After F1's five-week summer break, he went into the Belgian grand prix last weekend acknowledging that the remaining races of 2012 are crucial "regarding my future".

At Spa, the Brazilian then qualified a poor 14th compared to his teammate Fernando Alonso's sixth, but in the race charged solidly to fifth — his second-best result of the entire season.

"I don't know if this race changes anything regarding my future, but I am very satisfied," said the 31-year-old last Sunday.

Team boss Stefano Domenicali said the result was "just what was required" from the struggling Brazilian.

"We needed that sort of race from him as a team and he himself needed it as a driver," said the Italian.

But Domenicali added that Massa needs to keep impressing.

"We need to see that again, not only in Monza this weekend, but also for the rest of the season," he said.

"Before it happened, I was actually very skeptical when he decided to return to formula one," said former grand prix driver Hans-Joachim Stuck, who is now president of the German motor sport association DMSB.

Legend Stuck, who contested 80 grands prix, admitted his main concern about the unique Finn was his "way of life".

Calling himself 'the iceman', 32-year-old Raikkonen is famously laconic, often short-tempered with journalists, and has a reported fondness for a few too many drinks.

"He has now surprised me totally. This is a storybook comeback," Stuck told the DAPD news agency.

Indeed, Raikkonen is now touted as an outside chance for the 2012 world championship with Lotus, and has been linked with his former teams Ferrari and McLaren for next season.

Asked why Kimi's comeback has been so much better than Michael Schumacher's since 2010, Stuck said he didn't know but observed: "The Lotus is better than the Mercedes."

As for the 2012 title, Stuck said "Alonso and Vettel are definitely strong rivals, but if things go right for Kimi, everything is still possible."

It has emerged that the working group in charge of looking into F1's options is likely to approve some sort of forward roll-hoop or canopy for the 2014 rules.

"I think the idea of a closed cockpit is ridiculous for formula one," Salo, now a commentator for the Finnish broadcaster MTV3, said.

"Actually, it would no longer be formula one, it would be (sports car) prototypes.

"In my view it's not a good idea to panic after an accident, especially when nothing happened (in terms of serious injuries)," the former Ferrari and Sauber driver added.

In McLaren's official pre-race preview of the Italian grand prix, the British team said Monza's famous "Tifosi" are "sure to give every team a lot of support" this weekend.

The Telegraph quotes him as saying Monza is "not one that I enjoy standing on the podium at".

Told that the red sea of Tifosi screaming support for Ferrari from beneath the podium must be a sight to behold, Button answered: "Yeah, I don't know.

"I don't like people booing. I'm not used to football crowds.

"Those three stand out for me as being very special circuits. The only one missing is Silverstone, my home grand prix."

The news follows the Red Bull-owned team's confirmation that Giorgio Ascanelli has stepped down.

"We (now) start a new chapter in the history of Toro Rosso and I hope it's an interesting one," said boss Franz Tost.

"James comes to us with a strong reputation and has proved he can help smaller teams punch above their weight."

Toro Rosso is currently ninth in the constructors' championship.

James Key: “I am very happy to be joining Scuderia Toro Rosso after a few months away from Formula 1. It’s a great opportunity for me to join a team that strikes me as extremely ambitious with a workforce that is very motivated. Even after just a few days, I have sensed, from everyone I have dealt with, an enthusiasm to move the team forward.

"There are clear opportunities coming up through regulation changes and we intend to look not only at the long term, but the short term too. We will be studying the team’s working practices, throughout all the departments, while looking to see which areas need strengthening further. Our aim has to be to move the team up a level in terms of its position within the F1 hierarchy. Next year’s car project is already well underway and it seems to be going in the right direction and now we have a few months left to ensure it is a step forward from this year’s car.

"Looking closer to home, there is still some development to come on this year’s STR7 and we will be doing our best to make the most of the remaining eight races with the developments already in the pipeline, all of it coming off the back of a good weekend in Spa."