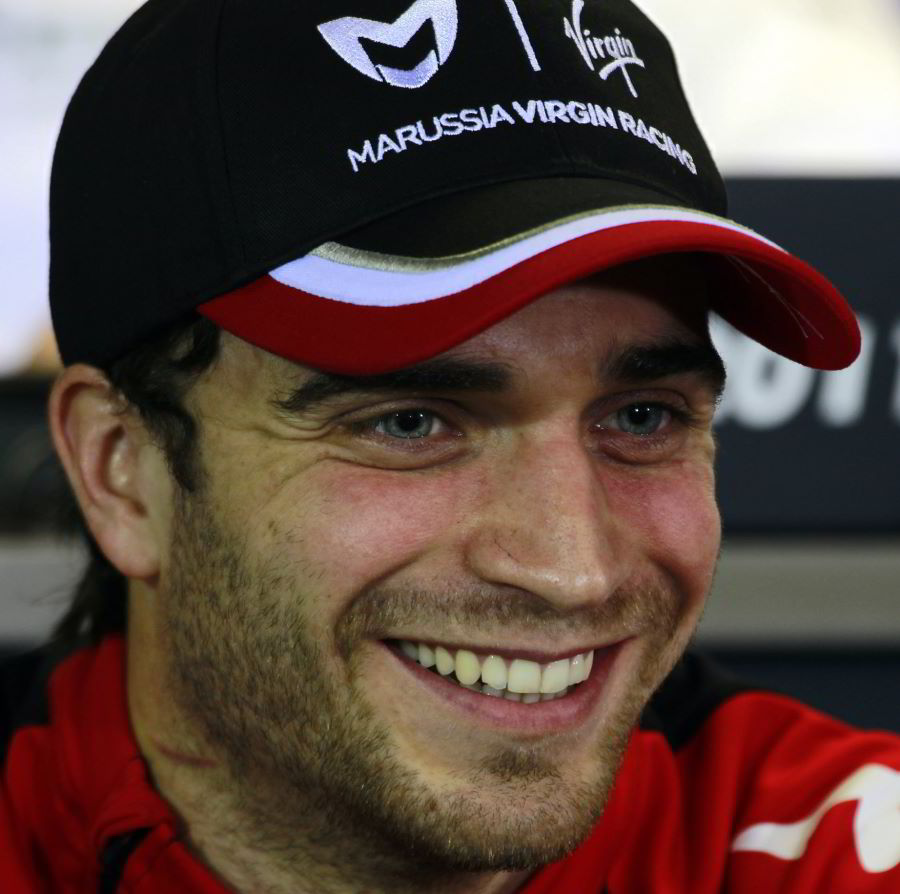 According to AR1.com sources in Europe, Jerome d’Ambrosio will definitely be replacing Romain Grosjean in Monza.

Grosjean banned for Monza after Spa crash
(GMM) Romain Grosjean will sit out this weekend's Italian grand prix at Monza, after Lotus decided not to appeal the Frenchman's one-race ban for causing the first corner crash at Spa.

F1 returnee Grosjean's actions, which also ended title contenders Lewis Hamilton and Fernando Alonso's races and so nearly caused serious injury to the latter, was described by the stewards as an "extremely serious breach of the regulations".

"I judged the gap to Hamilton poorly. A small error but with big consequences," Grosjean is quoted by Brazil's O Estado de S.Paulo newspaper.

"I apologize and I'm glad that no one was hurt."

Grosjean, while impressive in 2012, has been involved in several early-race incidents this year.

"It's time to put a stop to it," he admitted. "Some, like today, have been my fault, others not. I hope to not make any more mistakes in the remaining races."

Journalist Livio Oricchio said that because Ferrari driver Alonso's 40-point lead was slashed to 24 because of the crash, the headline from Spa might be "Grosjean re-opens the championship".

"Romain has great talent and is very fast. When he develops, he will be a great driver," his boss Eric Boullier said after the crash and ban.

In an official team statement, he said Grosjean's replacement for Monza will be announced this week.

As far as Ferrari's Stefano Domenicali is concerned, Grosjean's ban is a chance for the FIA to think about the bigger picture.

"What is certain is that, it would be better if, starting with the junior formulae, rules relating to on-track behavior were enforced in an inflexible manner, so as to have drivers as well prepared as possible when they reach this, the highest level of motor sport," he said.

Alonso, who briefly visited the medical centre after Grosjean's car sliced across his cockpit opening, watched the race with his mechanics whilst nursing a sore left shoulder.

"Everything is alright, the pain only comes from the whiplash," said the Spaniard.

"I am not angry with Grosjean, he definitely didn't do it on purpose," added Alonso.

Also feeling the FIA's wrath on Sunday was another repeat-offender Pastor Maldonado, who will take a double 10-place grid penalty at Monza for badly jumping the start and then crashing with Timo Glock.

The most anger in the paddock was, however, about Grosjean.

McLaren reserve driver Gary Paffett described the Frenchman's behavior as "stupid", and after climbing out of his wreck, Hamilton gestured towards his helmet before confronting Grosjean, demonstrating the foolishness of the move.

Triple world champion and German commentator Niki Lauda said the stewards got the ban – the first in F1 since Michael Schumacher in 1994 – "absolutely right".

"He (Grosjean) is talented, but sometimes incredibly stupid. I count this as the seventh time he has done something like that this year. Madness."

Lotus did not attempt to fight the FIA's decision, but boss Boullier noted that Williams' Maldonado has also had "many accidents" in 2012.

"So in one way this penalty for Romain seems pretty hard," said the Frenchman.

D'Ambrosio on pole for Monza race seat
(GMM) Jerome d'Ambrosio is on pole position to replace the banned Romain Grosjean at Monza.

The FIA has banned Frenchman Grosjean for one race after causing the crash that ended championship contenders Fernando Alonso and Lewis Hamilton's Belgian grand prix.

"We'll announce the name of (Grosjean's) replacement a bit later in the week," said Boullier at Spa on Sunday.

D'Ambrosio, who already attends all the races, said he is ready and willing to step into the cockpit of the highly-competitive black and gold E20.

"It's unfortunate for Romain, but it's the FIA's decision. It's not for me to comment," he told the Belgian broadcaster RTBF.

"Anyway, it's part of my job since the beginning of the year to be ready, no matter what. I'm ready and highly motivated.

"What happens, we'll see. It (the situation) is still brand new and I don't know exactly what will happen."

Boullier is quoted by the French-language RMC Sport as saying the chance d'Ambrosio will get the job is "80 per cent".

"(But) there are many drivers looking for a steering wheel," he is quoted by France's autohebdo.fr. "First, we are thinking of (appointing) our third driver."

Rival teams to study Hamilton telemetry – Horner
(GMM) McLaren boss Martin Whitmarsh has hinted Lewis Hamilton is lucky to avoid an internal punishment as the result of the 'Twittergate' affair.

The 2008 world champion is believed to have been scolded behind closed doors for publishing a highly-confidential telemetry sheet to his million Twitter followers.

Some paddock insiders believe it's the tip of the iceberg as Hamilton wages "war" with the British team over his unsigned 2013 contract.

Asked if McLaren needs to take action against the 27-year-old, Whitmarsh answered: "No.

"But it would be interesting to see how other team principals would deal with it," he is quoted by the Daily Mail.

Having re-signed Mark Webber for 2012 despite rumors of approaches by Hamilton's management, Red Bull chief Christian Horner boasted that his drivers would never commit a similar "breach of confidentiality".

"From what I understand it was car data, and if it was car data then I'm sure every engineer in the pitlane is having a very close look at it," said Horner.

After F1's five-week summer break, he went into the Belgian grand prix acknowledging that the remaining races of 2012 are crucial "regarding my future".

The Brazilian then qualified a poor 14th compared to his teammate Fernando Alonso's sixth.

But that was before Spaniard Alonso crashed at the first corner of the race, while Massa had a solid run to fifth — his second-best result of the entire season.

"I don't know if this race changes anything regarding my future, but I am very satisfied," said the 31-year-old on Sunday.

"We are happy for him, because a good result is just what was required at this point of the season," he said.

Drivers fortunate to escape La Source pile-up
The crash at the start of the Belgian Grand Prix was one of the scariest seen in Formula 1 for some time. Triggered by Romain Grosjean, who is likely to receive a hefty penalty, no less than three cars were launched high into the air in front of a charging pack.

As the F1 paddock begins to leave Spa, everybody is breathing a sigh of relief after Grosjean’s car missed Alonso’s head by centimeters.

“A good start, then a big boom and then off – I haven’t seen the images but the main thing is that we are all okay," Grosjean told reporters before being asked if he had moved over too soon. “I don’t know…as I say I haven’t seen the footage yet."

The Frenchman’s rivals were less sympathetic.

“Yeah I’m okay," Pérez told BBC Sport. “I think we paid for the mistakes of other drivers. It’s a shame for myself and for the team and we’re looking forward to the next one."

The crash marked a highly disappointing end for Hamilton, who refused to speak to the media until after the race and who had arrived in Belgium as the most recent F1 winner.

“I don’t really want to talk about the start," Hamilton said bluntly. “I think people can see what happened, but huge congratulations to Jenson (Button) on a fantastic race which was like a walk in the park for him. It’s great to see that the team has great pace."

Pirelli not planning big changes for 2013
Pirelli expects to make just minor tweaks to its tires for next year – but will wait a few more weeks before deciding exactly what it will do.

Formula 1's official tire supplier opted for an aggressive strategy with its compound choice for 2012, which helped contribute to an unpredictable start to the campaign.

And although it does not expect such radical differences for 2013, it is currently evaluating its plans and has scheduled a test at Barcelona later this month to help it make final decisions.

Paul Hembery, Pirelli's motorsport director, told AUTOSPORT about the company's plans for next year: "We are a little bit undecided at the moment.

"We have a few routes we could take; perhaps changing the structure, but we are also working on some compounds. We are undecided, so we will see how the next test session goes.

"We are at Barcelona, and that is the point where we will decide what we are going to do for next year. But there will be nothing too dramatic."

Hembery insists, however, that Pirelli wants to ensure that teams do not get too comfortable with their tires – and that they have to work hard to get the best from the rubber.

"I think it still needs to be a challenge, but also something that teams can work with," he said. "I think they will benefit from knowing this year's car and it will be less modified going forward than the switch from last year to this year and that will help them."

Pirelli has written to F1's team to ask them for their feelings on tire modifications for next year, and the consensus appears to be only that changes are made to wet weather tires.

"That [letter] was out of courtesy, and there are a few things with the rain tires that we would like to do. But testing is a problem.

"The only real test facility [for wet running] is Paul Ricard and that is fully booked up; so we are trying to find a way of testing. We want to do some work with the full rain to make it less conservative in terms of compound." Eurosport Yahoo!

Lotus keeps Double DRS off car for Monza
Lotus has confirmed to GPUpdate.net that it will not be running its ‘Double DRS’ at the Italian Grand Prix. Because Monza is such a low-downforce circuit anyway, the device – which is designed to increase straight-line speeds – would yield no benefit.

The Enstone-based team had been tipped as favorites for victory at Spa, as the concept would have generated huge top speeds for Kimi RÃ¤ikkÃ¶nen and Romain Grosjean. As it happened, the duo could not test it in either of the first two practice sessions as they were both washed out by heavy rain; the team therefore made the regrettable decision to shelve the part for the duration of the weekend.

As Raikkonen finished third, Grosjean triggered the first-corner pile-up and has been handed a ban for this weekend’s Italian encounter. Lotus should soon confirm reserve driver Jerome d’Ambrosio, who raced for Marussia Virgin last year, as substitute.