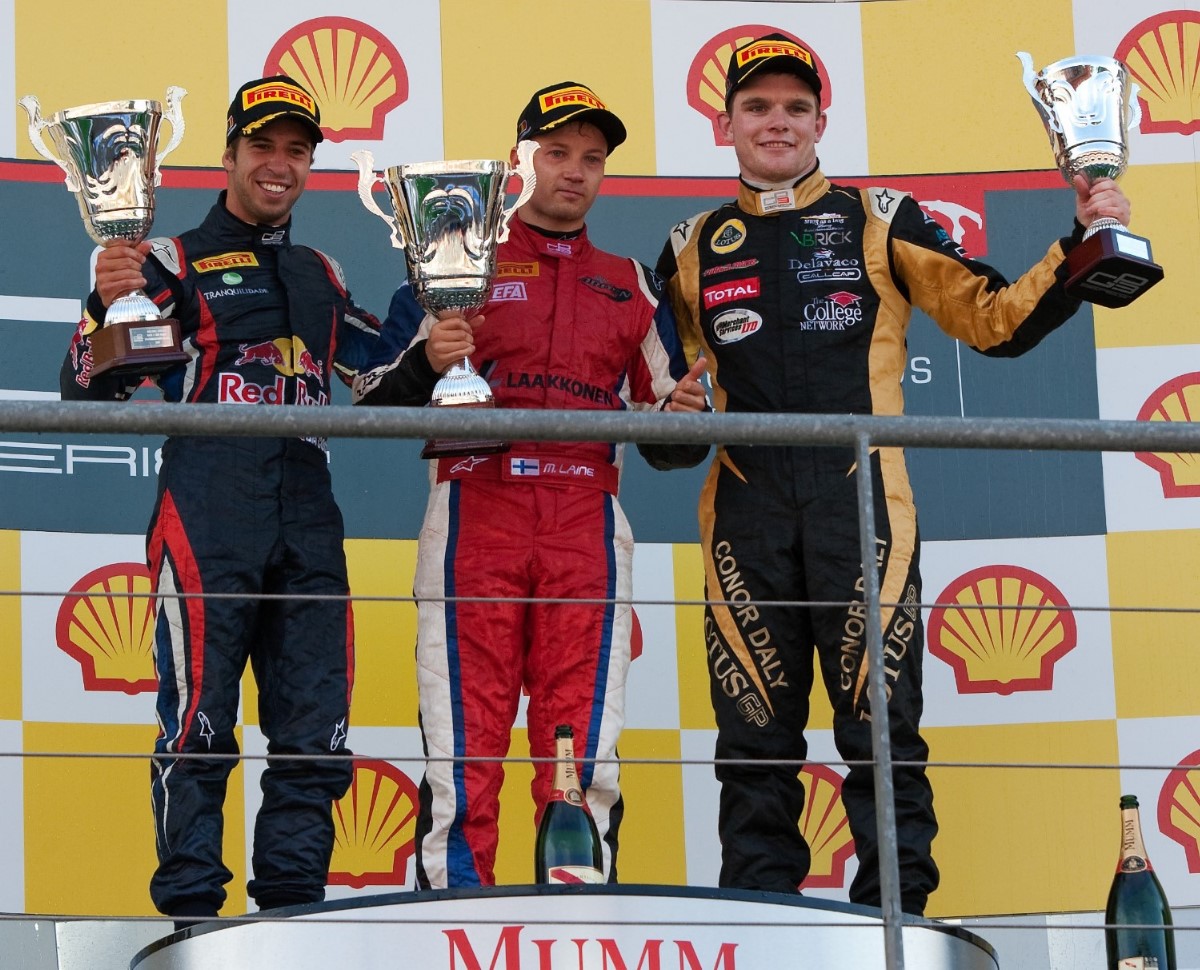 We have a new race winner in GP3! Matias Laine becomes the eighth different winner in the 2012 GP3 Series season, taking his debut victory at Round 7, Race 2 at the Spa-Francorchamps circuit. Antonio Felix Da Costa (Carlin) and Conor Daly (Lotus GP) finished second and third in a thrilling encounter.

The legendary Spa circuit did not disappoint with excellent racing throughout the field with cars five abreast whilst they fought for position. Lewis Williamson started from reverse pole with Daly alongside, but it was Laine who made the best getaway from 4th on the grid to grab P1. Daly and the Scotsman were wheel to wheel with the Status GP driver holding off the challenge of the American at the tricky first few corners until Daly got through to go second. This didn't last long with Williamson reclaiming P2 as the two were stuck like glue to each other in the early part of the race.

There was contact on lap one between Lotus GP teammates Aaro Vainio, Daniel Abt and Tio Ellinas with the Finn being sent into a spin which dropped him back outside of the top 20 and cost him a valuable opportunity to try and close the points margin with Series leader Evans. Ellinas later stopped at turn 9 after contact.

With the slipstreaming at the Spa, positions were changing every lap and it was Felix Da Costa in fifth who was trying to pull a move to pass Evans in P4. At this point Laine led the race by 2.4 seconds whilst the action continued behind him. The Carlin driver passed the New Zealander as five cars were side by side, truly spectacular and the two made brief contact. Williamson and Evans then fell back as the race went on, whilst William Buller, Patric Niederhauser and Abt moved forward. Another man on the move was Alex Fontana who was making sure he was in the mirrors of Felix Da Costa at the midway point of the race.

MW Arden's David Fumanelli and Marlon Stockinger (Status Grand Prix) made contact at turn 19, the Italian driver pitted a few laps later and retired. Felix Da Costa set his sights on a rostrum finish, firstly picking off Williamson and then Daly with two laps left but there was nothing he could do about race leader Laine who won the race by 2 and half seconds. Williamson was caught by Abt, Niederhauser and Fontana on the final few laps to eventually finish P7 after starting on the reverse pole. It wasn't Evans' day, eventually coming home in P15 after dropping back through the field and therefore picking up zero points.

The final eight finished with Laine crossing the checkered flag first, Felix Da Costa in second and pocketing the fastest lap yet again for good measure and earning an extra two points with Daly in P3. Jenzer Motorsport's Fontana picked up his best result of his GP3 career with fourth position, ahead of Abt who recovered from his earlier spin. Niederhauser was sixth after starting 11th, Williamson P7 and Buller collecting the last point on offer in eighth after starting P13 after carving his way through the pack.

Ocean Racing's Technology Robert Cregan with withdrawn from the Race after a crash yesterday in Race 1.

The championship is going down to the wire with Felix Da Costa having closed the gap to Series leader Mitch Evans to 21.5 points with two races remaining, with the MW Arden ace now on 147.5. Vainio has now dropped to P3 in the standings, 3 points back off the Portuguese driver with Abt in fourth, all four still have a shot of taking the GP3 Series crown. Lotus GP head the Team Standings on 329.5, MW Arden on 276.5 and Carlin on 164.

The GP3 Series returns in just a few days at Monza, Italy for the final round of the 2012 season on 07-09 September. Make sure you don't miss it as the Drivers Champion will be decided and crowned in Italy, as well as the Teams Standings, it will be one special finale to celebrate a fantastic racing season.