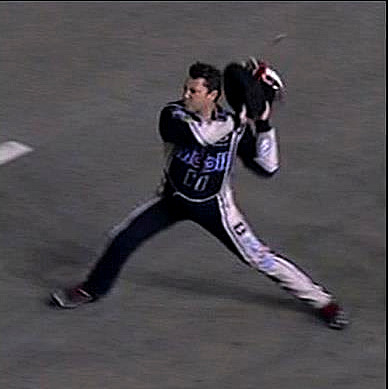 Tony Stewart got to drive a tank Tuesday afternoon, and chuckled a little at the obvious jokes about whether he wanted to roll over a Matt Kenseth car or if the tank could shoot helmets.

The jokes came at Stewart’s expense, three days after Stewart threw his helmet at Kenseth’s car after they wrecked battling for the lead Saturday night at Bristol Motor Speedway. Stewart’s helmet hit the hood of Kenseth’s car.

A little surprised at the attention his helmet toss Saturday night generated—and very much over it—Stewart could joke a little about his helmet-tossing ability while also trying to cool any talk of a Stewart-Kenseth rivalry.

“That’s not bad for a 41-year-old who doesn’t work out," Stewart quipped. “I got more velocity with two hands than with one. It was a little unorthodox and different but I definitely got a lot more velocity on it with two."

A three-time Cup champion, Stewart vowed Saturday night to run over 2003 Cup champion Kenseth every time he had a chance. Kenseth responded that was fine, that he would race Stewart the way Stewart raced him, which is why the accident happened in the first place because he expected Stewart to lift and avoid the wreck—just as Kenseth had done when Stewart passed him a lap earlier.

Stewart, speaking following a Mobil 1 promotion where he got to drive a tank as well as a drifting car, backed off that statement Tuesday.

“You get over that stuff," he said. “It’s been part of racing for as long as I can ever remember. That won’t be the last time that you ever see two drivers have a disagreement. … I can’t guarantee anything is not going to happen, but it’s not our intention to go seek him out.

“We’ve got along a lot more races than we disagreed." Sporting News