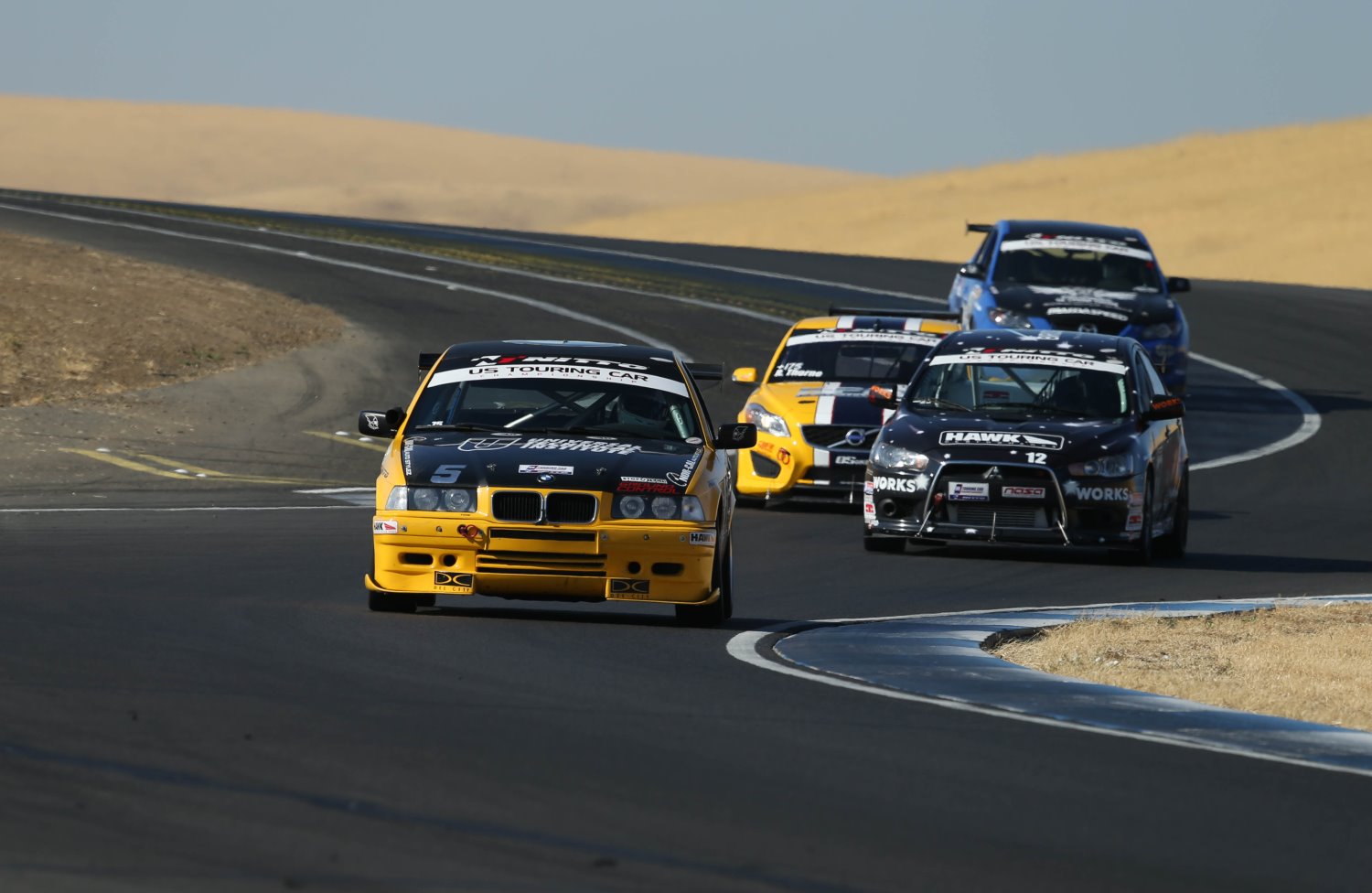 Larry Bani won his first Nitto Tires United States Touring Car Championship (USTCC) race ever at Thunderhill on August 19, 2012 driving the GoGoGear.com / Universal Technical Institute BMW M3. Bani, who was last year’s iGrille Top Rookie, became the fourth different race winner in as many races this season. Finishing only one second behind Bani was the Roger Kraus Racing Honda Prelude of Chris Lock who was also the iGrille Top Rookie of the race. Lock was followed by theTNI Racing Mazdaspeed 3 of Felipe Cabezas.

Bani, who started in fourth place, used his drag racing skills to launch the BMW as hard as possible and managed to leap to second place right behind the pole sitter Dave Brown in the Competition Clutch / Hawk Brake Mitsubishi Lancer Ralliart. Bani kept the Mitsubishi within sight while Lock and Cabezas were keeping the pressure on the BMW. On lap six, the 90 degree air temperatures seemed to be too much for Brown’s Mitsubishi and he started to slow which allowed Bani and Lock to both pass Brown. Cabezas followed one lap later and Brown knew he was in trouble.

With nobody to chase and everyone chasing him, Bani now had to make sure to drives an error free race. That was easier said than done as Lock was relentless in his pursuit. The BMW had more power and was quicker in the straights while the Honda would close the gap in the tight sections of the track. “Chris [Lock] is a totally clean driver and I have so much respect for him. He could have taken me out a dozen times but we never touched. It would have been so easy for him to just nudge me out of the way and take the lead but he kept it clean," commented Bani after the race.

Lock who has already won a race this year was very happy with second place since it gives him a big boost in the points standings. Lock managed to win the iGrille Top Rookie award with his second place finish and he set the quickest lap of the race.

Cabezas had to be delighted to be on the podium after a rough weekend. On Saturday Cabezas, who was the overall points leader coming into round four, blew an engine in their primary car and had to switch to a backup car. Then on Sunday an off course excursion almost wrote off the backup car. Fortunately, the damage was minimal and the team managed to fix the car on time for the race.

In the GT class, Ken Kurtz used his powerful V8 engine to muscle his way to a victory in his Yokohama/TPIS Pontiac Firebird just ahead of the European Motor Works BMW M3 of John Handal.

The teams now start their preparations for the big race of the season at Sonoma Raceway with the FIA World Touring Car Championship on September 21-23, 2012.