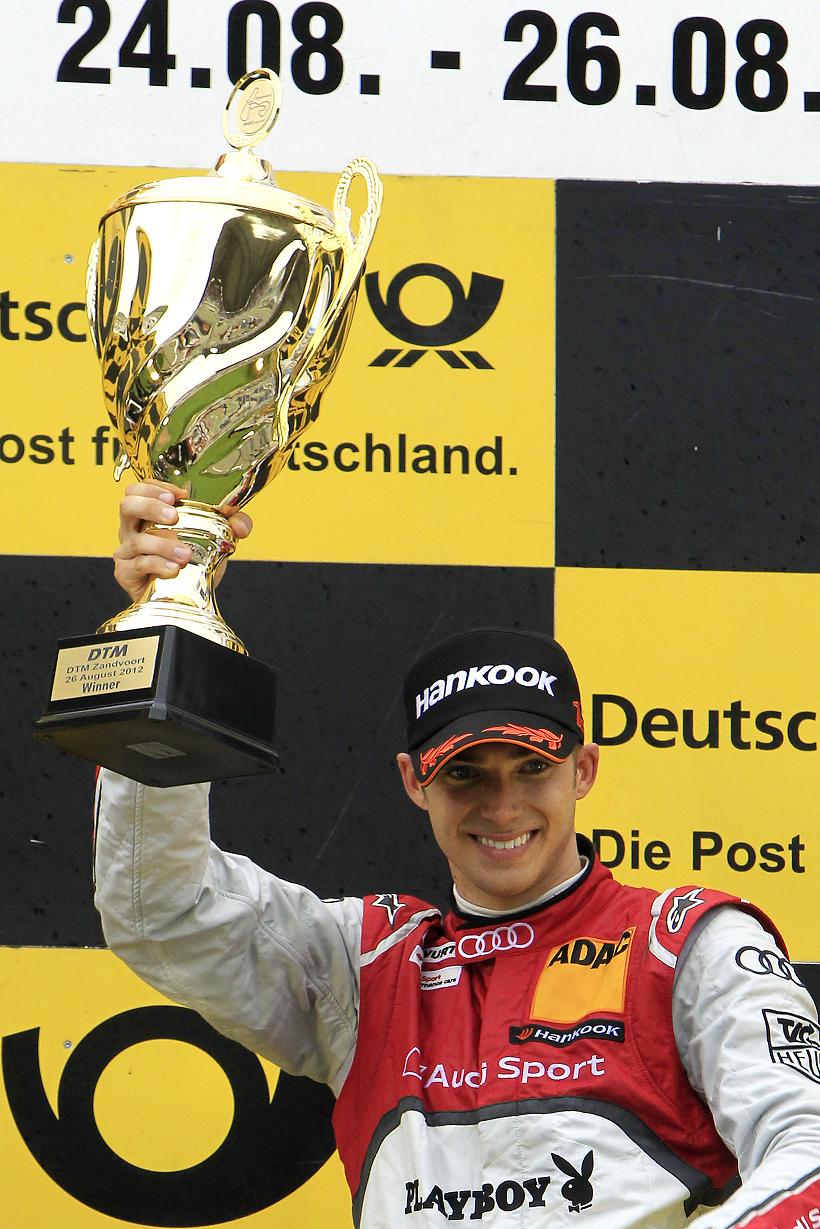 The seventh DTM round of the season at Zandvoort in The Netherlands brought plenty of action. Intermittent rain, two safety-car phases and thrilling overtaking maneuvers turned it into the most exciting race of the season. After 43 laps, Italian Edoardo Mortara emerged as the jubilant winner with his Audi A5 DTM. After his success at Spielberg, this was his second DTM victory of the year. His fellow Audi drivers Mike Rockenfeller from Germany and Swede Mattias EkstrÃ¶m followed in second and third place. Excitement is rising in the battle for the title: points’ leader Gary Paffett (Mercedes-Benz) and Bruno Spengler (BMW) finished seventh and sixth. The third title aspirant, Jamie Green (Mercedes-Benz) ended up fourth and overtook Spengler to claim second place in the drivers’ standings.

After the race, 25-year old Mortara said: “This was the best race of my life, a really tough battle with ‘Rocky’. Conditions were incredible: rain, dry, then rain again. When you are driving in such conditions, you can get off the track on every lap."|

For Audi, the race started with a heart-stopping moment: on pole position, Timo Scheider stalled his engine at the start and dropped back to 14th place. Later on, the race was over for the two times’ DTM champion after the bonnet had come off his car. In the course of the race, there were numerous position changes at the front of the field. Rockenfeller led until lap 32, when eventual winner Mortara overtook him.

Brit Jamie Green started the race from sixth place on the grid and experienced 43 very turbulent laps. The 30-year old crossed the finish line in fourth position as the best-placed Mercedes-Benz driver. “For me, this race was a topsy-turvy affair. At the start, it was very good, but then, unfortunately, our first stop was too slow. After that, I was stuck and couldn’t overtake. When the rain set in, I was back in the race again. All in all, fourth place is quite a good result," the 30-year old said.|

Behind Audi driver Adrien Tambay from France, Canadian Bruno Spengler finished sixth with his BMW M3 DTM. Having started the race from 18th place, the 29-year old showed a great recovery. “That was a very good race, even though I wasn’t able to show the full potential of the car. I am happy that I could make it to the finish, because it was really difficult out there. Sixth place is the best we could manage," Spengler said.

For points’ leader Gary Paffett (Mercedes-Benz), the race was an emotional roller-coaster ride. From sixth place on the grid, the Brit even had made it up into the lead. When rain set in again on lap 28, Paffett and BMW driver Martin Tomczyk collided in the battle for fourth place. The wheels of Tomczyk’s car locked up, he couldn’t avoid Paffett and turned the Brit around. Paffett dropped back to twelfth, but with first-class overtaking maneuvers, he still made it all the way up to finish seventh. Tomczyk parked his car and immediately made his way to the Mercedes-Benz pit wall stand to apologize to head of motorsport Norbert Haug, who accepted the apologies. The two BMW drivers Dirk Werner and Augusto Farfus from Brazil as well as Ralf Schumacher with the DTM Mercedes AMG C-Coupé rounded out the top ten.

In the drivers’ standings, Paffett remains in the lead with 109 points from Green with 93 and Spengler with 91 points. After his victory at Zandvoort, Mortara follows in fourth place with 74 points. In total, 37.000 spectators attended the third DTM race of 2012 outside of Germany. The next round takes place at Oschersleben, September 16th.

Edoardo Mortara (Playboy Audi A5 DTM), 1st place
"It was incredible. I was so motivated and wanted to squeeze out the maximum at all cost. I had a good start and took a few risks on the first laps and when rain was setting in. The outcome could also have been different, though. But the risk paid off and we stayed on track. A one-two-three victory for Audi and my second success for Audi Sport Team Rosberg – for me, a dream has come true today."

Mike Rockenfeller (Schaeffler Audi A5 DTM), 2nd place
"I had a good start. It was a difficult race but in most conditions I was able to control the race. When it started raining again I was a bit too cautious and ‘Edo’ (Mortara) took advantage of that. In second place, he was able to take a little more of a risk. Afterwards, in dry conditions, I was a bit faster but it wasn’t enough to overtake him again."

Mattias EkstrÃ¶m (Red Bull Audi A5 DTM), 3rd place
"It was a thrilling race. I was battling with Gary Paffett some of the time and with the rain at other times. A couple of times, I wasn’t in control of everything one hundred percent. I’m pleased with third place. A big ‘well done’ to ‘Edo’ (Mortara) and Mike (Rockenfeller)."

Dr. Wolfgang Ullrich, head of motorsport Audi: “This was an exciting race with a fierce battle between the three Audi teams. It is nice to see that the performance is there. Now, we are there again where we always want to be: capable of winning. Here at Zandvoort, we were strong as an entire team. I am happy for the guys who have been working hard to achieve this success."

Norbert Haug, head of motorsport Mercedes-Benz: “Gary was on his way to a podium finish until he was turned around, but the damage is limited with seventh place after a great recovery. Paffett and Green in first and second place in the drivers’ standings with three races remaining are a good basis. Today, our speed was very good, but the conditions weren’t."

Jens Marquardt, BMW Motorsport director: “One can sum up this race under ‘maximum damage control’. Bruno and Augusto have done a tremendous job. I feel sorry for Martin. He was doing very well, but he misjudged the grip as the rain set in. It was a racing accident, in which Gary was involved, too. Fortunately, Gary was able to continue. All in all, it was a good race result after a mediocre qualifying."