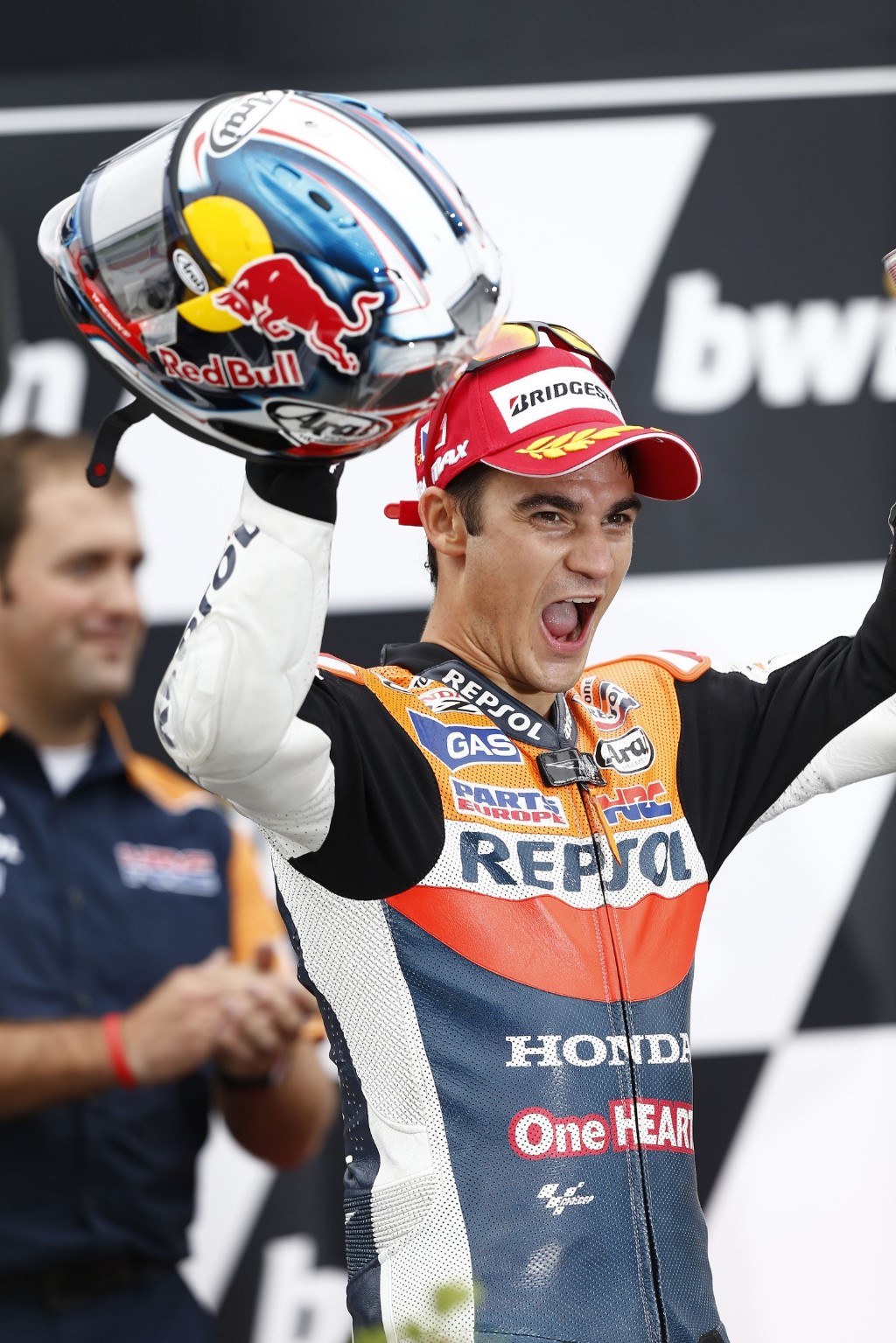 Repsol Honda Team’s Dani Pedrosa stormed to a thrilling victory at this weekend’s bwin Grand Prix Ceske republiky in Brno ahead of Jorge Lorenzo and Cal Crutchlow, opening up the championship race once more.

Despite dark clouds looming, the track was dry, much to the delight of riders and fans, and it was Yamaha Factory Racing’s Lorenzo who got the holeshot off the line, holing off Pedrosa and Monster Yamaha Tech 3’s Crutchlow. Yamaha’s Ben Spies looked to continue his bad luck as he dropped back drastically after a few corners with a slipping clutch. This left Tech 3’s Andrea Dovizioso and Ducati Team’s Valentino Rossi to chase down Crutchlow in third.

With 17 laps to go, LCR Honda MotoGP’s Stefan Bradl was involved in a tight battle with San Carlo Honda Gresini’s Ã�lvaro Bautista, with the German taking the Spaniard for sixth after dicing for numerous turns. Meanwhile, Spies looked to have re-found his stride with the issue sorted, and was fighting his way back through the pack after dropping down to 13th. Three laps later, Bradl was dicing with Rossi for fifth place, getting the better of the Italian after a few attempts. On the same lap, Spies’ race came to an end after he crashed out of his charge.

Avintia Blusens’ Ivan Silva suffered a technical issue with 12 laps remaining, while Lorenzo and Pedrosa were neck and neck at the front of the race, having pulled out a significant gap over Crutchlow. On the same lap Bautista overtook Rossi, whose Desmosedici looked to be slowing. A lap later Pedrosa sparked some life into the battle at the front, as he got past Lorenzo on the inside, though the Mallorcan continued to stick to his rear wheel.

The leading pair spent the entire 22 laps separated by less than 1/2 of a second, and then swapped positions four times on the final lap before Pedrosa finally pulled ahead through the final corner.

Crutchlow recorded his own milestone by taking his first ever podium in the MotoGP class, a fitting way to celebrate his contract extension with the team this weekend. Pedrosa’s win has moved him to within 13 points of Lorenzo and blown the championship race wide open at the top. Fourth spot went to Dovizioso, in front of Bradl, Bautista, Rossi and Power Electronics Aspar’s Randy de Puniet who finished top CRT. Cardion AB Racing’s local rider Karel Abraham and De Puniet’s teammate Aleix Espargaro completed the top ten.

DANI PEDROSA
"Today was one of my best races in MotoGP ever, to win with a big gap is always nice, but to have a battle like today with Jorge, it's sometimes more rewarding. It was a difficult last lap because I knew that Jorge was very fast in the middle of the corner and I could hear the bike right on me and I knew that just the smallest gap would allow him to pass. In fact, in that left corner I opened the door just a little more than normal and 'boom' he was there, I could see his bike in my face! With just half a lap to go, I was a little more nervous than before but I knew I had some strong points coming to the end of the lap. I tried to get the best drive out of the hill and then in the last corner I was beside him, when I released the brakes we were side by side in the corner and I was able to take my line and win the race. It was amazing and I'm really happy with this victory, for all my team and also for my father because it is his birthday! For the Championship we must keep up this momentum as Jorge is riding very strong and consistently in the top two. Testing will be important to set us up for the final part of the season, so let's see what we can do".

Jorge Lorenzo Position 2nd – Time: +0.178
“I really enjoyed that race, mainly in the last laps, Dani and I tried everything for the win. We are so close in the Championship that every point is important. It was a very strategic race, in some parts of it I was slowing down to relax a bit and get some air and I think Dani was a little later on as well, staying calm and preparing for the last laps. When Dani was pushing a lot I took a lot of risks to stay with him and finally I had to try to pass him, the victory was so close I had to try. This time Dani was cleverer than me and braver so congratulations to him, next time maybe it will be different! A big thank you to my team as well who worked really hard and made a very competitive bike for me."