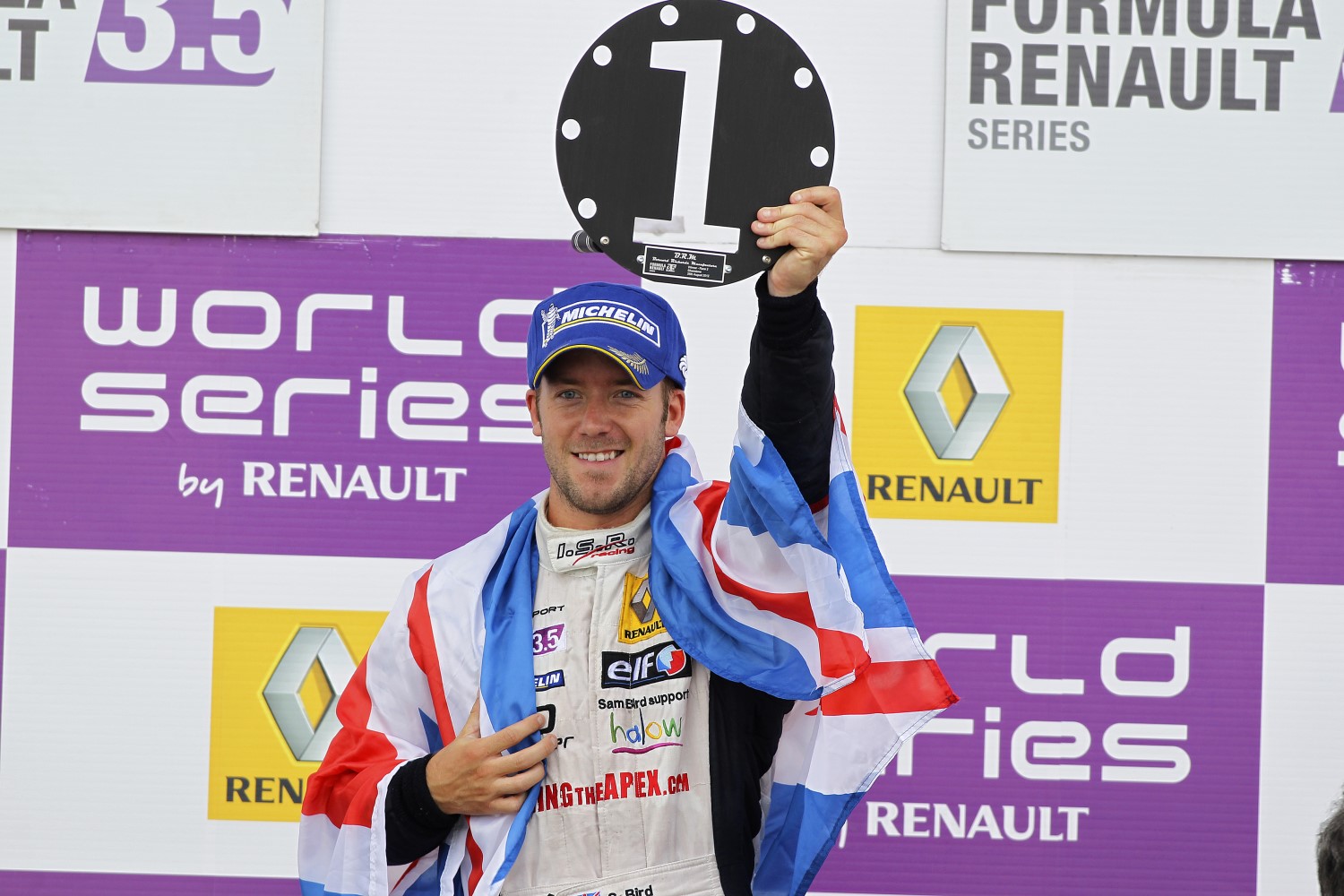 Having led until the closing stages of race two, Marco Sorensen (Lotus) must have thought he had victory in the bag. But it was not to be for the Dane, who suffered a puncture in the penultimate lap and left Sam Bird (ISR) free to take the win. The British driver’s victory, at Silverstone, is his second of the season, and puts him back into second place in the championship standings, five points behind leader Robin Frijns (Fortec Motorsports). Antonio Felix da Costa finished second to take his first podium in the competition, while Jules Bianchi came home in third.

The last action on Saturday was the second FR 3.5 Series qualifying session, which took place on a dry track just a few hours after the first race. Jules Bianchi (Tech 1 Racing) followed up his second win of the season by claiming pole position for the third time this year. On Sunday morning he lined up on the front row of the grid alongside Marco Sorensen, followed by Robin Frijns, Nico MÃ¼ller (International Draco Racing) and Sam Bird.

As the lights went out, Bianchi lost his pole advantage to Marco Sorensen, who went into the first turn in the lead ahead of Frijns, Bird, Bianchi and Antonio Felix da Costa. Bird, for his part, found an opening before the end of lap one and overtook Frijns to move into second.

The front five quickly pulled away from the rest of the field, headed up by sixth-placed Mikhail Aleshin (Team RFR), who in turn was followed by Will Stevens (Carlin), MÃ¼ller and Vittorio Ghirelli (Comtec Racing). The battle for fourth place, meanwhile, was really heating up between Bianchi and da Costa.

The situation at the front remained tight after ten laps, with only four seconds separating race leader Sorensen from da Costa in fifth. This set the stage for an extremely open end to the race. Frijns then made several minor errors, which invited Bianchi to make a move in lap eleven. But, at Copse corner, it was da Costa who sneaked through to seize third, gaining two places with one maneuver. Bianchi remained in fourth, while Frijns slipped down into fifth.

Frijns, the championship leader, struggled increasingly as the race progressed, and a lack of grip saw him drop down to 11th place in the space of a few turns. The race took a further twist when Sorensen suffered a puncture in the penultimate lap and was forced to retire. This allowed Bird to take the lead and win the race ahead of da Costa, Bianchi, Arthur Pic (Dams) and Alexander Rossi (Arden Caterham), who had started last. Frijns eventually finished ninth but he retains control of the championship, albeit with a mere five-point lead over Bird and a six-point advantage over Bianchi.

Sam Bird: “This victory is a real gift because, honestly, Marco Sorensen had a really great race. He was the quickest and deserved to win it. I won at Monaco and now I’ve won on home soil, at Silverstone. That’s not bad! The championship situation is too close to call. I’m certain it will be decided in Barcelona, and not before."

Antonio Felix da Costa: “I started the season at the NÃ¼rburgring and I’m already on the second step of the podium. That’s great, considering I started from ninth. We still need to improve in qualifying if we’re to have a hope of winning a race. It’s a good result for me, for Arden Caterham and for Red Bull Junior Team."

Jules Bianchi: “It’s always a bit disappointing to finish third after starting the race from pole. Victory was possible, but I just didn’t get into the right rhythm at the start of the race. It was pretty intense between me and Robin [Frijns]. He defended his position strongly, but he ended up losing out and dropped two places in one hit. Congratulations to Sam Bird – he’s a rival I know I need to watch until the end. The end of the season will be very close. Between Robin, Sam and me, whoever makes the first mistake will pay a heavy price."