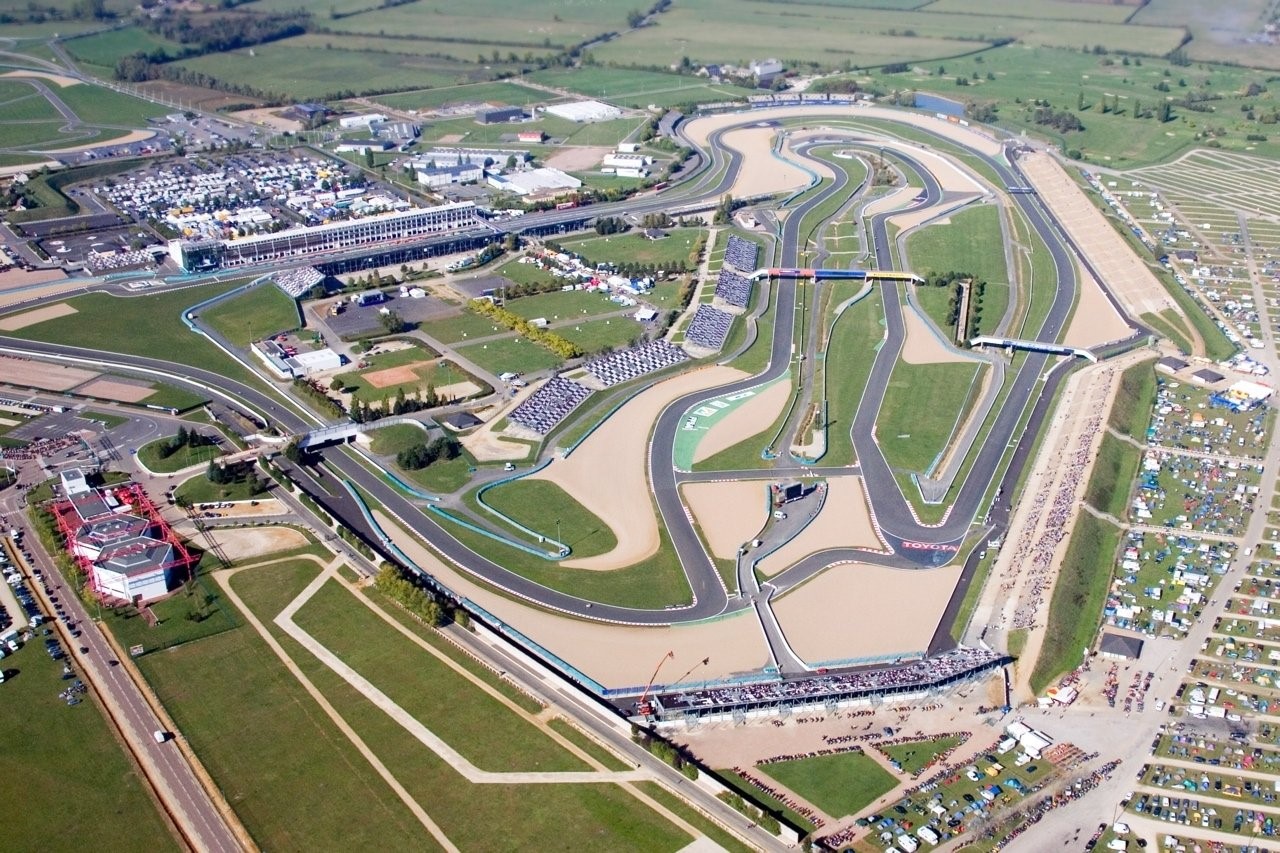 We reported on July 19 that Ferrari and Mercedes were planning to run at the circuit in mid September after Monza, as per the F1 teams' allowed days of testing this year for inexperienced drivers.

Other teams have either already run at Silverstone in July, or plan to stick to the original plan to test after November's Abu Dhabi grand prix.

Germany's Auto Motor und Sport said in July that smaller teams had ruled out joining Ferrari and Mercedes at Magny Cours because they have "neither the material nor the staff to complete a parallel program" just days before freight sets off for Singapore.

But Magny Cours announced that Force India will in fact be joining Ferrari and Mercedes at the test held between September 11 and 13.

"We have worked tirelessly to upgrade the venue, which has just been homologated to F1 standards for another four years," said the circuit's chairman Serge Saulnier.

"This is an extremely positive step forward as we seek to return formula one racing to our circuit," he added.

Wolff admits Williams' 2013 driver dilemma
(GMM) Toto Wolff has admitted Williams is facing a dilemma over its driver lineup for 2013.

The famous British team's shareholder and new executive director told Brazil's Totalrace he would "rather have three cars" to accommodate Pastor Maldonado, Bruno Senna and reserve driver Valtteri Bottas on the grid next season.

Finn Bottas, who is managed by Austrian Wolff, is hotly tipped to replace probably Brazilian Senna in 2013.

"Valtteri has been doing free practice but racing is something completely different," Wolff is quoted as saying.

"He is a great talent and we want to keep him, but there is also an economic side," he said, undoubtedly referring to the reportedly EUR 30-plus million and EUR 10 million brought to Williams by Maldonado and Senna respectively.

"I would rather have three cars next year," he smiled.

Wolff defended Senna, who has had a difficult 2012 but finished a strong seventh in Hungary last month.

"I am impressed with Bruno," he said.

"He is not only an intelligent and sensitive driver, he also learns quickly. Our concern is to support him in the best way possible, knowing that he has lacked some practice on the Fridays.

"He has had good moments and days when things have not worked, but in Hungary everything worked very well and I hope it was the beginning of many good weekends from now on," said Wolff.

No Friday outing for Lotus' d'Ambrosio at Spa
(GMM) He may be Lotus' Belgian reserve driver, but Jerome d'Ambrosio has revealed he will not be driving the black and E20 in front of his home crowd next weekend at Spa-Francorchamps.

According to Belga news agency, the former Virgin driver said earlier this season that he expected to get the opportunity to drive the Lotus during some Friday morning practice sessions at grands prix in 2012.

But d'Ambrosio, 26, said it will not be happening at Spa.

"This is the result of a joint decision," he is quoted by the Flemish newspaper De Morgen.

"It certainly has not been imposed on me. If I was the director of the team, I would have made the same decision," said d'Ambrosio.

"Lotus is currently third in the constructors' championship, after Red Bull and McLaren," he explained. "We are only one point from McLaren and at the moment ahead of Ferrari.

"So of course this changes everything. Now, every minute and every detail counts.

"Right now I am involved in important behind-the-scenes work at the factory."

D'Ambrosio said it is not clear if he will get the opportunity to drive the E20 in Friday practice at another grand prix this year.

"We are looking at everything race by race," he said. "At the end of the season my contract is up and I have several (possible) avenues.

"For sure my credibility has only increased due to my work as third driver."

'Random' F1 order now fading in 2012 – Davidson
(GMM) After a topsy-turvy start to 2012, a natural order is now beginning to establish itself at the head of the field.

That is the view of former Super Aguri driver Anthony Davidson, who now works as a television pundit for the British broadcaster Sky.

This week, Mercedes team boss Ross Brawn was quoted by Reuters as saying F1 "must make sure" that the "random factor" seen earlier in 2012 is not permanent.

Briton Davidson, however, thinks the problem is already fading.

"I don't know whether we're going to see a surprise like, say, a Maldonado win a race through to the end of the year," he told Sky Sports News.

"I think now you're starting to see that natural progression of top teams starting to pull away. But I could be wrong," added Davidson.

We reported recently that paid-up clients of a company called The Ticket Enterprise (TTE) would not receive their actual tickets for the Spa-Francorchamps race because TTE had gone out of business.

But according to the Belga news agency, the organizer of the fabled and popular formula one race has agreed to allow the 5,600 affected spectators to enter Spa next weekend.

The report said the news was confirmed by chief promoter Etienne Davignon at a press conference.

Davignon reportedly told the affected ticket holders to take their payment receipt to the ticket offices at the circuit next weekend, where they will sign a document ceding their rights to the promoter Spa Grand Prix.

This will allow the organizer to legally claim back from TTE the value of the tickets.

"We will see how we can recover (the money)," Davignon is quoted as saying. "It is too early to judge just how much we are going to lose."

Gazzetta puts Massa dead last in mid-season ranking
(GMM) If the editors of Europe's top specialist publications were in charge at Ferrari, Felipe Massa would have no chance of signing a new contract for 2013.

We reported on Monday that Germany's authoritative Auto Motor und Sport had ranked the Brazilian just 17th on its mid-season ranking of the best drivers of this year.

Now, the influential Italian sports daily La Gazzetta dello Sport has published its mid-season ranking — and Brazilian Massa is dead last with a meager score of 4.5 out of 10.

Even HRT's Narain Karthikeyan (5/10) has his head above Massa's, but also struggling in Gazzetta's eyes is McLaren's Jenson Button, who was classified behind Charles Pic and in a lowly 20th.

In contrast, Gazzetta gave Massa's teammate Fernando Alonso a perfect ten, with Lewis Hamilton (8.5) and Kimi Raikkonen (8/10) second and third, ahead of the Red Bull drivers and then Romain Grosjean.

The newspaper said that while Alonso got "101 per cent from the car without major errors", the time has come after seven years at Ferrari for a "change of air" for Massa.

Lotus set to race debut ‘The Device’ at Belgian GP
(Apex) It is no secret that Lotus have been developing their own version of the Mercedes style double DRS (Drag Reduction System) for the E20 driven by Kimi Raikkonen and Romain Grosjean, which the team’s technical boss James Allison is dubbing as ‘The Device’.
Allison said in the team’s preview of the Belgian GP, “We’ve also been focusing on ensuring that we have the capability to run the new device in Spa should we be confident enough to do so."

When asked for the name of the new device, he added, “I rather like ‘The Device’ as it has a sort of Dr Strangelove appeal to it, but most people refer to it as DDRS."

“A big focus has been getting ready for Monza which is immediately after Spa and requires a unique downforce package. It’s only one race but it requires a whole new set of wings and a disproportionate amount of work. We’ve also been focusing on ensuring that we have the capability to run the new device in Spa should we be confident enough to do so," said Allison.

The double DRS has been tested only by Raikkonen, with Grosjean set to get a taste of ‘The Device’ this weekend at Spa-Francorchamps which should suit the pace setting Lotus E20.

Allison predicted, “If it’s a dry weekend Spa fits the category of circuit at which we are most confident, so all of us are excited to be going there. The team is impatient to be back at the track and racing the E20."

Spa is notorious for producing rain during grand prix weekends, nevertheless Allison is confident, “If it’s a wet weekend it’s a much more open question; for all teams, not just for us. It frequently rains at Spa, so we have to be prepared for that possibility. We’ve had various wet experiences so far this season, with the inclement weather coming mainly in qualifying. At Spa, the nature of the corners and the loadings on the tires should be sufficient to generate enough heat in the rubber, so we’re not unduly concerned. We would prefer a dry weekend, but we should be competitive whatever the weather."

The Lotus E20 has been the revelation of 2012, but the team are not resting on their laurels as Allison explained, “We’ve structured our development of this year’s and next year’s cars differently to the last few seasons to leave us with more than double our traditional post-shutdown development on the current car. This late season freedom was paid for by having conducted a more intense development program for next year’s car earlier on this year."

“Hopefully this approach should pay dividends for the development of both cars. The E20 certainly hasn’t fallen behind relative to our opposition, and next year’s car is looking promising at this stage," concluded Allison.