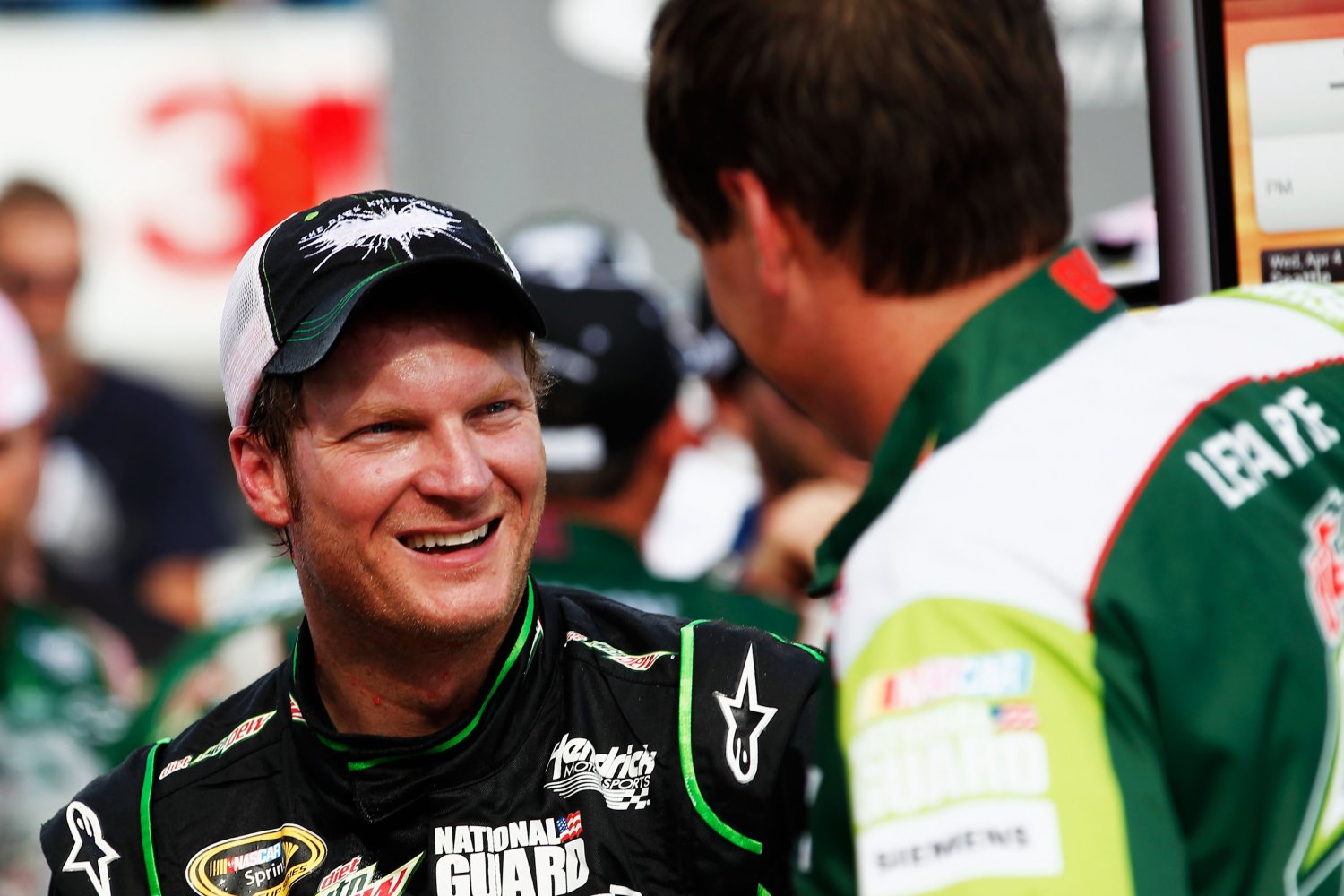 Dale Earnhardt Jr. has no regrets about how he drove against #24-Jeff Gordon on a restart Sunday at Michigan International Speedway, but NASCAR's most popular driver laments how radio chatter turned a difference of opinion between the Hendrick Motorsports teammates into a firestorm. "I personally carried on a little bit on the radio about it; just curious about it," Earnhardt told USA TODAY Sports during a Tuesday interview at Hendrick Motorsports.

"In retrospect, to try not to let ESPN or anybody like that make a big deal out of it, I should have not said anything at all so there wouldn't be any footage worth editing. But truth be told, the fact that we were teammates allowed that conversation to happen. If it was Brad Keselowski and me, I would have never known he was mad. I would have never cared that another driver was upset with me because for the most part what happened between me and Jeff happens dozens of times in one race, but the drivers never play it out like me and Jeff did because the radio conversations and lines of communication aren't there."

Earnhardt said he and Gordon are "fine" with each other and sorted it out with a text exchange after Sunday's Pure Michigan 400, and they met again at Hendrick's campus Tuesday for the team's weekly debriefing of drivers and crew chiefs. USA Today

08/19/12 Jeff Gordon, who is fighting for a wild-card spot in the Chase, was livid with his Hendrick Motorsports teammate at the time.

“He can thank me for not wrecking him," Gordon told his crew. “That was stupid."

Gordon later blew an engine and fell out of the race, while Earnhardt moved into contention for the win.

After climbing from his car, Gordon explained the incident and his anger.

“At the moment I was (mad). I get mad. That happens," he said. “I didn't think it was very smart what he did. He took me four-wide and then he slid up in front of me. If I hadn't checked up, I would have wrecked him and a bunch of us. So it happened and we move on."

Earnhardt, who finished fourth, said after the race that he didn't believe he did anything wrong when racing Gordon.

Gordon said Earnhardt should have shown him more respect, especially as a teammate.

“You don't want to have to check up in that instance," Gordon said. “In that moment, he wasn't treating me like a teammate and I wasn't doing anything different than I would have done. He's racing hard. I don't blame him for taking me four-wide. But if you're going to take a guy four-wide, don't come sliding up the racetrack because that is going to wreck you and other people."

Earnhardt said he is always respectful of his teammates, but is under a lot of pressure to perform.

"I’ve been having to drive so carefully for so many years and this year I’ve got a really good car and a really good team," Earnhardt said. "He’s the one that built a reputation for this team to win races and to run well. I’m under a lot of pressure to continue that. Those guys want me to go out there and take charge and take positions no matter who is driving the cars in front of me.

"I try to take care of my teammates. I don’t put them in the fence or run into them, but we’ve got to race on the racetrack just like everybody else in situations like today. I understand if he is upset and he’s got a lot of experience and he can help me understand what I might have done wrong if I did anything wrong. I’m just trying real hard for this team." Sporting News