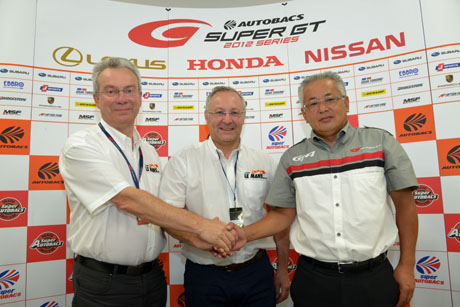 The GTA Co. Ltd, creator and promoter of the Asian Super GT Series, the Automobile Club de l’Ouest, creator and organizer of the Le Mans 24 Hours, and the promoters of the new Asian Le Mans Series are delighted to announce that the cars in the GT 300 category in the Super GT Series will be accepted for the 6 races in the 2013 Asian Le Mans Series.

The Super GT Series GT 300s will race in GTC in the Asian Le Mans Series, a true promotional category. Thus, the following cars will be eligible for the GTC category in the Asian LMS: the GT 300s, the FIA GT3s and single-make Cup cars.

The level of performance of the GT 300s will be balanced by the ACO and the GTA by technical solutions that are currently being studied: they are aimed at maintaining a level playing field in the hierarchy of categories already present, in particular vis-a-vis the LM GTEs (GTC being slower than GTE).

LM P2 and GTE will be the top categories in the 2013 Asian LMS. GTC, a promotional category, will consist of FIA GT3s, GT 300s and the single-make Cup cars. In the prototype class this same promotional spirit will be expressed by the LMPC-FLMs.

This decision agreed between the two organizers should help the development of Super GT Races in Asia and Le Mans-style endurance events on the continent thanks to the Asian LMS.

Teams and drivers who own GT 300s can run in both championships whose calendars will be drawn up to avoid clashes.

“The ACO, organizer of the legendary Le Mans 24-Hours race, will launch the Asian Le Mans Series in 2013. I’m particularly grateful to Messrs Pierre Fillon, the ACO President, and Remy Brouard, the ACO Director of International Development, to have accepted our request, namely: to allow the GT 300 cars to take part in the Asian LMS.

“Through this collaboration, I feel sure that our Asian strategy, the organization of GT 300 races in Asia and the training of local teams and drivers will be a strong factor in the development of the motor racing industry in these countries.

“Today, the collaboration between the ACO, the GTA and the 2SM Group, the Asian LMs promoter, is taking its first steps. I believe and hope that together we can contribute to the development of motor sport in Asia."

“To be able to count on the support of the GTA in our development in Asia is great news for the ACO, and also for our new Asian Le Mans Series in 2013 as well as its promotional category, GTC.
“I’d like to offer my sincere thanks to President Bandoh and his team who came to the Le Mans 24 Hours in June to make this proposal to us. I’m sure that the ACO/GTA balance of performance will be a big success for the two championships in 2013."

“Like the Le Mans 24 Hours, the Super GT series is a benchmark in Japan and Asia with well-attended races, major car manufacturers present with works teams, very good drivers and great circuits! It’s an honor for the Asian Le Mans Series to work with such an organization in its future development.

“In what is a difficult economic context for all those involved in motor sport this decision should lead to combined meetings in Asia and Japan in the future: it will also help bring about cost reductions for the Asian teams.

“I’m very happy with this agreement with the GTA team concerning GT 300 in the Asian Le Mans Series, and I’d like to thank the whole GTA team for their welcome, their collaboration and their in-depth involvement!"

“With eight months to go to its launch the 2013 Asian LMS is taking on an increasingly clear shape every day with circuits and major countries like Japan, China, and Indonesia, future entrants in the four categories, LM P2, LM PC, GTE and now GTC combining the FIA GT3s, GT 300 and single-make Cup cars. We’ll soon have more good news in the coming weeks on the media coverage and the full 2013 calendar."

*The Japanese round of the Asian Le Mans Series will take place on 22nd September 2013 on the Mount Fuji Speedway, and will be the only Japanese race on the Asian LMS calendar that consists of six races in China and in the rest of Asia.