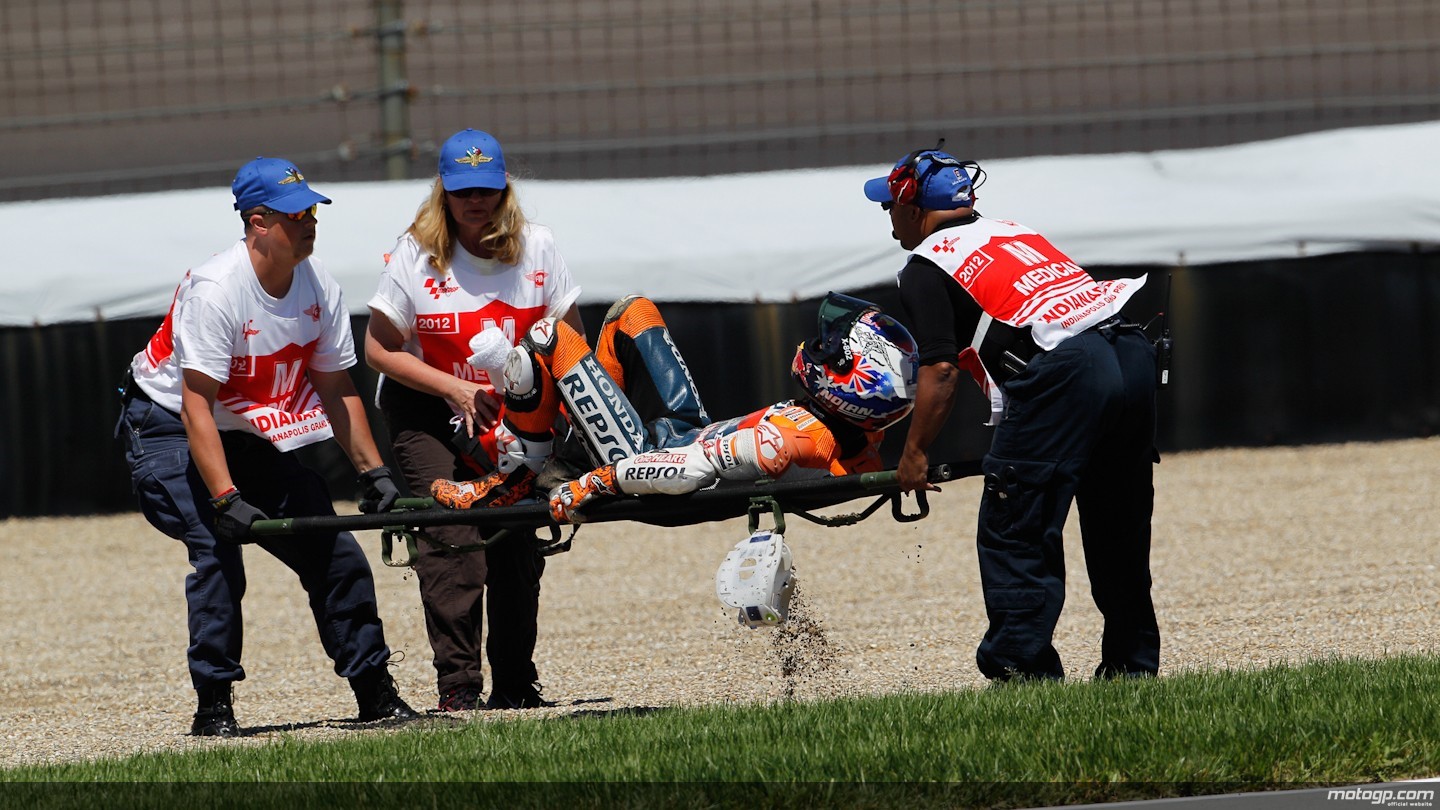 UPDATE After suffering a variety of fractures to his ankle, tibia and fibula along with torn ligaments due to his spectacular high side crash during qualifying yesterday, Repsol Honda's Casey Stoner has confirmed he will be on the grid for the Red Bull Indianapolis Grand Prix today.

Stoner arrived at the track early this morning and was greeted by a team of local doctors from the Circuit Medical Centre. After some initial tests they confirmed that they were satisfied with Casey's movement and mobility and declared him fit to race, if he felt comfortable to do so. The ankle was heavily strapped and supported, and his Alpinestars boot modified to allow Casey to ride in this morning's twenty minute warm up session. Although painful, the current World Champion reported that he felt comfortable on the bike and would like to take part in the 28 lap race.

Local doctors will give him a 60mg Toradol injection an hour before the race to dull the acute pain, along with Aspalgin to help him manage for the 45 minute race.

After today's crash during qualifying practice for the Red Bull Indianapolis Grand Prix, Repsol Honda's Casey Stoner was taken to the Methodist Hospital in Indianapolis for further check ups.

Casey had X-rays and an MRI scan on the right tibia and fibula, right ankle and right foot. It was confirmed he had suffered several small chipped bone fractures, a 10mm fracture on the talar dome below the tibia and fibula, contusions to the anterior tibia, posterior tibia and medial malleolus, and soft tissue swelling around the ankle. He has also torn his deltoid, anterior talofibial, calcaneal and fibular ligaments in addition to a high ankle sprain.

Hospital staff strapped the ankle for protection through the night and Casey left the hospital at midnight. He will consult with the medical team in the morning to assess the situation and decide if he is able to ride the machine safely.

CASEY STONER
"It's the first time in my career that I haven't been able to get up and walk away from an accident myself. As soon as I stood up, I looked down and saw my foot was at a strange angle to my leg. I had a shooting pain in my lower leg, then I felt a crack as my ankle popped back in. It was very painful and I was sure I had broken something. The local staff at the circuit Medical Centre were all very helpful and after taking some initial x-rays they agreed I should go to hospital for further checks. The team that looked after me at the Methodist Hospital were fantastic, so professional, attentive and incredibly helpful, I'd like to thank them all for taking good care of me. They confirmed that I had some chipped bone around my ankle and a small fracture, but I was concerned about the damage done to any ligaments so we did an MRI scan. This showed that I had torn almost every ligament in my ankle and heavily bruised my tibia. I need to see how I feel tomorrow morning to understand if I'm able to race. I am really disappointed as I felt we had the package for pole in this race and a strong chance for the win. Many other riders came off today, I hope they are ok. We'll see how we feel in the morning and will do all we can to be on the grid"