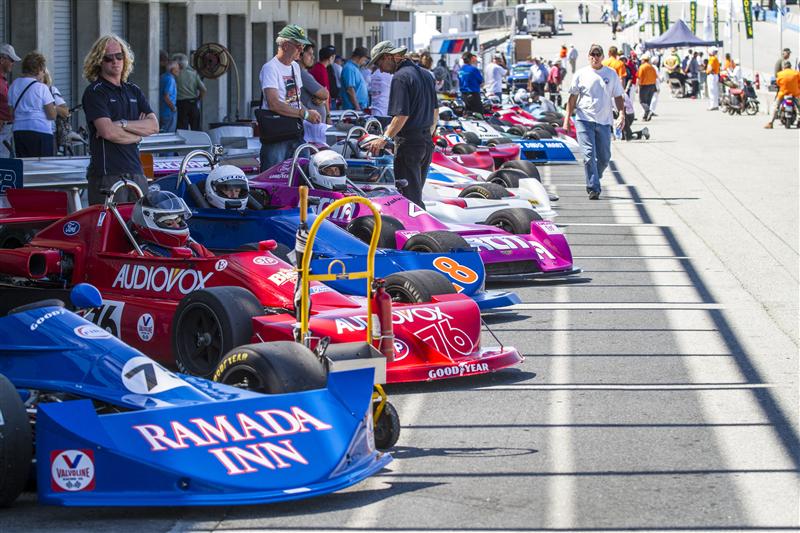 Even though the Rolex Monterey Motorsports Reunion is feverishly busy celebrating Shelby Cobra’s 50th Anniversary, it is simultaneously revealing the rich heritage of historic automobile racing as a whole with 17 different period-specific race groups running the road course at Monterey, California’s Mazda Raceway Laguna Seca. The event, in its second day of well-attended qualifying rounds, will swell with even more spectators come tomorrow, when weekend competition begins and the natural rhythm of Monterey Peninsula’s Classic Car Week swings attention from today’s champagne receptions at The Quail, A Motorsports Gathering to the only driving-at-speed event in Car Week’s richly-stocked smorgasbord of offerings for vintage automobile lovers.

While serving in Europe during WWII, many American soldiers learned to appreciate the two-seat roadsters they saw there. As they returned home, they began importing one of the especially coveted makes, the legendary MG, thus setting alight the sports car craze in America.

It is in the Rolex Monterey Motorsports Reunion Pre-1940 Sports & Touring Car group that Peter Thelander (Orange County, Calif.) will drive his 1934 MG NE Tourist Trophy Magnette. He and his wife Frances embody the love of MG sport cars having “raised their family" on MG T series cars, MGAs and MGBs. “This car is one of seven that was specially made for the 1934 Irish Tourist Trophy Race," said Thelander. “MG won the race in 1933 with the MGK3, which had a supercharger, but superchargers were banned for 1934, so the company had to quickly come up with a car to compete that year. This car is one of them. For 70 years old, it handles very well around this course."

The modern era of Formula 1 began in 1950, and great names like Ferrari, Alfa Romeo, Maserati, Cooper and Talbot Lago were the marques of the day. At this year’s Rolex Monterey Motorsports Reunion, several cherished cars from this period occupy the field in the group for 1927-1951 Racing Cars. One of them is the pristine 1949 Talbot Lago T26 owned by David Duthu (Houston, TX). It is the very last of the Talbot Lago Grand Prix cars to be built, totally restored and with an extensive racing history.

“It was a factory team car in 1950 when the company went into receivership, and after the South American Grand Prix, all the cars were sold off," said Duthu. “That year, Juan Manuel Fangio and José Froilan GonzÃ¡lez drove this car and another Talbot Lago car, and what is interesting about that is nobody knows which one drove which car."

Duthu, who also has a 1956 Jomar Mark II entered in the group for 1955-1961 Sports Racing Cars under 2000cc, is typical of the owner and drivers here who not only relish the past, especially relative to their own car collection acquisitions, but also live for the present where it is considered an honor to give an old car new racing life.

“I’ve had this car for four years and it has been wonderful," said Duthu. “The car is quite agile, and I think of it as an elegant driving car due to its long wheel base. It’s not quirky or darty, so you can actually work the car beautifully, put it into a nice drift and hold that drift while keeping up the power and then power out of the turn, which makes it so much fun to drive." Duthu added that his Talbot Lago has a lot of torque, is normally aspirated, and even though it is heavy at over 2,000 pounds, it is very well balanced. The engine has two spark plugs per cylinder and develops 280 horsepower at 5,000 RPMs. It also has a Wilson pre-selector four speed gearbox and aircraft magnetos.

“Driving here at Mazda Raceway Laguna Seca is fun, but I can really feel it in my shoulders today after driving this car through all the twists and turns of this circuit," said Duthu.

In its day, Formula Atlantic was the stepping stone for any driver whose desire was to race Indy cars or Formula 1. Names like Bobby Rahal, Gilles Villeneuve and Keke Rosberg were the star drivers of the day and just a few of the many who had successes in major league racing after a period of time in Formula Atlantic. The fastest driver on Thursday and Friday in the Rolex Monterey Motorsports Reunion’s group for Formula Atlantic Cars was Wade Carter III (Seattle, Wash.) with his 1976 March Formula Atlantic.

“We’re fastest in both practice and qualifying sessions; therefore, so far, so good," said Carter. “The car has been a dream to drive, so hopefully we will be able to keep it up front for the rest of the weekend. In its day, the March chassis was a front runner, always one of the fastest cars in the field. What I can tell you now is the car is a delight to drive, and I have a smile on my face every time I hop out of it. As for the Rolex Monterey Motorsports Reunion, this is the event we look forward to all year; this is the best event going."

Carter’s Crew Chief Pierre Phillips has been involved in race preparation for Formula Atlantics since the series began in the early 1970s. “It’s really kind of gut wrenching to see all these beautifully turned out Formula Atlantic cars racing today in vintage race events; it brings back so many wonderful memories for me. The cars all look great, and the top cars are really flying."

So while 18 Cobras from the Rolex Monterey Motorsports Reunion today motored on their “Quail Run" to share their classic brilliance with those attending The Quail Lodge events, several hundred more Cobras stayed behind to be enjoyed by Reunion goers in the paddock and corral areas at the raceway. And even if these, too, had left, there would have been no shortage of other magnificent historic automobiles to admire.