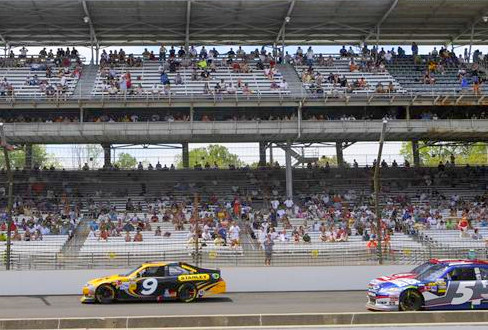 Fans couldn't give tickets away for Sunday's Brickyard 400, according to The Indianapolis Star, a thud of a finish for Indianapolis Motor Speedway's "Super Weekend" push.

The Indianapolis Star The NASCAR Sprint Cup race won by Jimmie Johnson was seen by 125,000 fans, according to a NASCAR estimate ( a generous number). The total was a hefty bite lower than last year's 138,000 and continues the free-fall from the 280,000 that watched the race in 2005.

Sara Hurtman, 31, told the Star that she tried to give away a seat (with a $75 value) on Facebook and at the Speedway entrance, but found no takers. "People don't seem to get into it as much these days," the Noblesville, Ind., resident said.

Tickets were going for as little as $25 on Craigslist. Kyle Berher, 26, told the Star he had been attending the race for 10 years and had never seen the stands so empty. He said he bought a ticket for $45 (half price) outside the Speedway.

The result can't be too gratifying for IMS, which added the Nationwide Series and Grand-Am Rolex Sports Car Series races to spruce up the weekend in hopes of reversing sagging attendance. IMS President Jeff Belskus had predicted Thursday that the crowd wouldn't drop for a fifth consecutive year at his track, which has seating for 257,000, by far the most in NASCAR, but it did.

You can only sell so many race tickets in a given market per year. IMS has brought in everything possible to dilute the Indy 500 at IMS and ruin their core product. The Indy 500 never sells out now and the other races at IMS are complete failures. You could shoot a canon into the stands for the Grand-Am and not hit anyone. It was a disaster. The Nationwide race was not much better and the Sprint Cup race crowd was meager.

They may as well bring in swamp buggy racing next. Instead of running all the France Family races which are now pretty much money losers, IMS should get rid of them all and just run a second IndyCar race at the Speedway each year. Indy is the home of IndyCar, and so it should remain an IndyCar sanctuary.