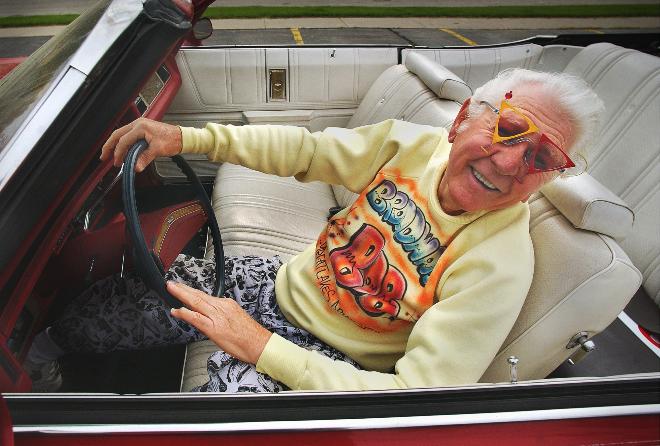 He rode on the nose of a jet-powered dragster with a beer in one hand and survived a shower of flaming metal from a piece of farm equipment that had blown up – on purpose.

And Metzler threw himself an 80th birthday party that took two days because, he said, so did his birth.

"When I was born, it was 1928, near the start of the Great Depression," Metzler said in a 2008 interview. "Just before midnight on (September) the 27th, I started to pop out.

"I envisioned all the bad times that were coming, so I went back in. I wish I'd have stayed there."

But if he had, the world would have missed Broadway Bob.

The colorful, eccentric, one-of-a-kind promoter and entertainer died Friday afternoon at an assisted living facility in Kenosha. He was 83. Metzler's death was announced by Great Lakes Dragaway, the track in Union Grove that he opened in 1955.

Metzler earned his nickname in the 1950s while strolling through pits at a California track wearing red houndstooth pants, a red-and-white jacket and white shoes with zippers, he said.

Later in life he switched to air-brushed T-shirts, odd sunglasses – one with frames shaped like martini glasses – and Zubaz, the wildly patterned not-quite-sweatpants that were popular for a time 20 years ago.

With his getups and a shock of thick white hair, Metzler was hard to miss on the grounds of Great Lakes Dragaway.

"He just didn't care. He did his thing," said Bob Frey, a longtime announcer for the National Hot Rod Association, who knew of Metzler's reputation long before he met him in the 1970s. "He was the same way in person as he was in his professional life

"He came to the Hall of Fame (induction) wearing the T-shirts and the glasses, and everyone figured nobody else would have got in. They'd have called security, for goodness sakes. And they escorted him to his table right up on the front row."

The down payment for Great Lakes, Metzler claimed, was made with money he had earned dealing blackjack to fellow Marines while stationed at Camp Pendleton, the corps' training facility in southern California, and through other on-the-side businesses while he was in the military. He envisioned it as a safe place for hot-rodders from Milwaukee and Chicago.

Over the years Metzler made friends with the legends of drag racing.

Although the NHRA, the premier sanctioning body in the sport, never competed at Great Lakes, he would bring the stars to the track for match races. Don Garlits, Don Prudhomme, Shirley Muldowney and T.V. Tommy Ivo all routinely made appearances.

He also thought in ways many other racetrack owners didn't.

While daredevil Evel Knievel was still recovering from injuries suffered in a motorcycle jump crash in Las Vegas, Metzler paid him an unheard-of $35,000 to perform at the track and – more important – to talk up the event ahead of time on Milwaukee and Chicago television.

Events such as Metzler's Olympics of Drag Racing became known nationwide, and the advertising call of, "Sunday, SUN-day, SUNDAY," still rings in the ears of 1980s Milwaukee radio listeners.

"He gets so much credit for being able to survive with the times and to change and evolve," Frey said. "He knew what the people wanted. He gave them a good show.

"It wasn't all about drag racing. He just happened to have a racetrack to make a living, but it was an entertainment venue. When you went there with Broadway Bob, you were entertained."

Metzler is the only promoter inducted into the International Drag Racing Hall of Fame in Ocala, Fla.

He sold Great Lakes before the 1995 season but continued to serve as its ambassador and maintained a museum/gift shop on the grounds. He cautioned customers there who wanted a hug: "no nibbling on the ear and no kissing on the neck."

Among the items for sale was what he claimed was the first bobblehead on which more than one head wobbled, a figurine with him riding on the back of a dragon.

As Metzler prepared for his 80th birthday party, he told the Journal Sentinel of his plans to have multiple Elvis Presley impersonators and strolling minstrels, as well as the more traditional bands and birthday cake, on the grounds and promised it would be a celebration not to be missed.

Then, in true promoter style, asked a question: "What would you think about 85?"

The NHRA community learned of Metzler's death Saturday during its event in Sonoma, Calif., where Broadway Bob stories flowed freely among those who had known him.

"We're all sitting around here, trying to figure out what they're going to dress him up in when they put him in the casket," Frey said. "We can see the undertaker going, 'You want him to wear what?'

"If they put him in a suit and tie, he'll be rolling over in his grave." By Dave Kallmann of the Journal Sentinel