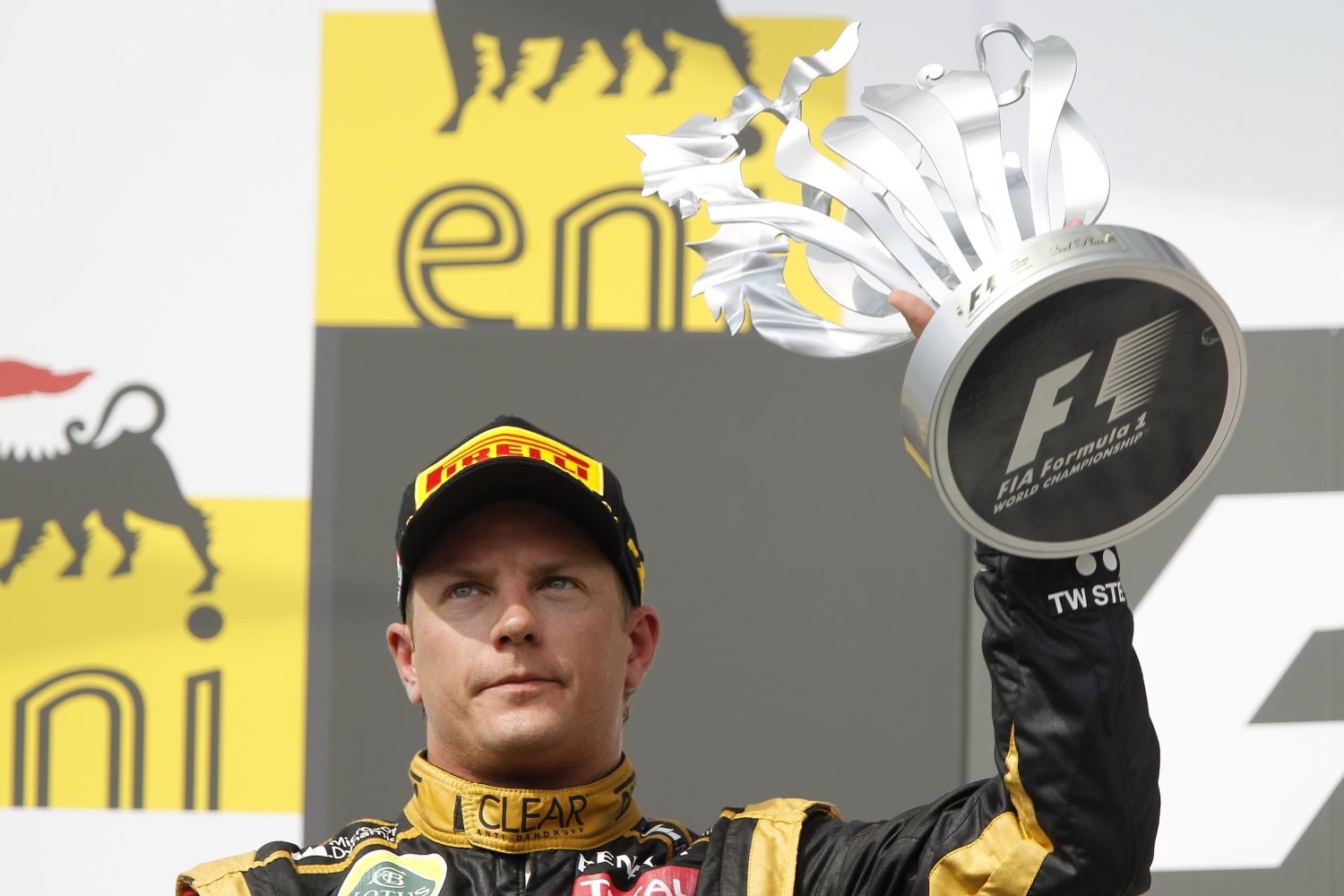 Boullier urges Raikkonen to stay at Lotus
(GMM) Eric Boullier has responded to growing rumors that Lotus could be set to lose Kimi Raikkonen to Ferrari.

After a weekend of speculation that he could be Ferrari's best option to replace the struggling Felipe Massa, Finn Raikkonen on Sunday hinted that his spat with Luca di Montezemolo might not be too big an obstacle.

"Things probably could have gone a nicer way in the end but life goes on and you never know what happens in the future," said the team's 2007 title winner.

Until now, it was thought Raikkonen was on a two-year contract at Lotus.

Team boss Boullier is quoted by the Finnish broadcaster MTV3: "There are always a lot of rumors.

"We have a two-year contract with Kimi, but as in every agreement, there are always options.

"I believe Kimi is happy here," said the Frenchman, "and I do not believe that his experience with Ferrari was the best one."

Boullier thinks Raikkonen would be wiser to stay at Lotus in 2013.

"Being with (Romain) Grosjean is certainly easier than Alonso. I can't see why Kimi would want to be the second driver at Ferrari when he has the chance to be the number one here."

What the Hungaroring rumors have proved is that Brazilian Massa's position at Ferrari is definitely in doubt.

"Felipe knows very well that these are some important races for him," boss Stefano Domenicali said after Sunday's Hungarian grand prix.

As for Raikkonen, Domenicali said he has "always had the opinion" that the Finn is a "very special driver".

Massa was asked by Brazil's Globo if the new rumors are a worry.

"For sure the first part of the season was not very positive for me, but I feel better today than then," he answered.

"The situation with my contract is not clear and I have nothing to say."

Surrounded by burgeoning paddock rumors the Williams shareholder Toto Wolff-managed Valtteri Bottas will surely get a race seat in 2013, Brazilian Senna has struggled during his first half-season with the British team.

But in Hungary, Senna made the 'Q3' segment for the first time in 2012, going on to outrace Barcelona winner Pastor Maldonado to seventh at the finish.

"The team was very happy with my race," he is quoted by O Estado de S.Paulo newspaper. "Frank Williams came to tell me that he is happy with my progress."

The newspaper said Senna will begin the August break by visiting his family in Brazil, before returning to his home in Monaco.

And two of the errors were committed by the 43-year-old even before the race started.

It has emerged in Germany's Auto Motor und Sport that, after the formation lap, Schumacher parked his silver Mercedes in the wrong grid slot, which is what caused Charlie Whiting to abort the start.

"I radioed the pits to say that he was in my place," Caterham's Heikki Kovalainen, who qualified 19th – two places behind Schumacher – said.

"I didn't know who was to blame, I just knew that I was in the wrong position," the Spaniard said.

Then, when Schumacher saw that Whiting had aborted the start, the great German – whose contract runs out later this year – killed the engine.

The rest of the field simply geared up for another formation lap, which left Schumacher stranded on the grid and needing a push from the marshals to the pitlane.

Asked why he turned off the engine, Schumacher said: "It used to always be like that."

Not exactly: even by 2006 – the last season of Schumacher's ultra-successful first career – the old five-minute delayed restart had been scrapped.

He then sped out of the pits too fast, incurring a drive-through penalty.

"Today was obviously one of those races that you will not look back at for very long," said the seven time world champion.

Teammate feud brewing at Marussia – report
(GMM) A feud is brewing at the back of the grid.

The report said rookie Frenchman Pic, who outqualified and outraced his team leader in Hungary, held up German Glock in qualifying.

"Maybe he doesn't understand the English on the radio," an angry Glock was quoted as telling reporters after alleging he was blocked by Pic.

Glock, 30, said he has no intention of sitting down to discuss the issue with Pic.

"It's pointless," he insisted. "It is happening for the second or third time and so it's up to the team to solve it."

Winning structure still in place at Lotus – Villadelprat
(GMM) Joan Villadelprat is full of praise for Lotus, a team he says still has the blood of Benetton and Renault flowing in its veins.

Spaniard Villadelprat, who was team manager at the Enstone based team when Michael Schumacher won his first titles in 1994 and 1995, was speaking the day after Kimi Raikkonen and Romain Grosjean finished second and third in Hungary in the black and gold-liveried Lotuses.

"What counts is that the team has always maintained its competitive structure and the only changes in personnel were the ones that were needed," he wrote in his El Pais column.

"This has given them a stability that most don't have. It's a solid and flawless team.

"They have demonstrated in the past that they can make a winning car: we did it with Schumacher and they did it again must more recently with Fernando Alonso.

"Although the owners have changed, the structure has survived.

"Eric Boullier, the team boss, and James Allison, the technical head, are doing an outstanding job, having restored a winning feeling again."

Father urges McLaren 'loyalty' for son Hamilton
(GMM) If Lewis Hamilton's father was still in charge, his son would be signing on the dotted line.

Anthony Hamilton, who was invited by the McLaren driver to attend the Hungarian grand prix with his wife, is no longer involved in the management of the 2008 world champion.

And Hamilton snr also recently split with his other charge, Paul di Resta.

But after seeing 27-year-old Hamilton dominate at the Hungaroring with a win from pole, Anthony Hamilton sounded adamant his son should stay at McLaren.

Hamilton's lucrative contract is running out, and comments in the media made recently by Lewis and team supremo Ron Dennis indicate negotiations over a new one are delicate.

"McLaren is where Lewis's heart is," Anthony said on British television Sky after the race.

"What's really important in life is loyalty. It's not all about the money."

A week after winning at Hockenheim, the Spaniard actually extended his 34 point lead in the championship to 40 points in Hungary, despite finishing just fifth.

But the Ferrari driver confided to Spain's AS newspaper: "Actually we should have finished seventh."

He was obviously referring to McLaren's Jenson Button – sixth in Hungary a week after finishing second in Germany – and also his closest points rival Mark Webber, who had a bad weekend and finished a poor eighth on Sunday.

"We know that Red Bull, McLaren and Lotus have faster cars," Alonso is quoted by the Italian agency AGI.

"We have changes to make ahead of the next races. I think we have to stay focused, not worried.

"We must go on holiday knowing that our lead is not enough to win the championship."

'Many problems' at Toro Rosso also last year – Alguersuari
(GMM) Half a season into 2012, Jaime Alguersuari has aimed fire at his former team Toro Rosso.

The Red Bull-owned squad controversially dumped its established race drivers Alguersuari and Sebastien Buemi at the end of last year.

They opted instead for the energy drink outfit's latest hotshot rookies Daniel Ricciardo and Jean-Eric Vergne, but at the mid-point of the current season, Toro Rosso has just 6 points on the board.

The Faenza based outfit is also believed to have split with its veteran technical chief Giorgio Ascanelli, over a disagreement about the direction of the team.

Asked for his two cents, Spaniard Alguersuari told AS newspaper: "Honestly, for me it's in the past and I am only looking forward.

"All I will say is that we had many problems there with the way things were done, but it's not my problem any more.

"Now I need to keep looking to find a project for the future, which is something they didn't give me," the 22-year-old added.

Nevertheless, the feeling is the paddock is that Toro Rosso and Red Bull will definitely give Ricciardo and Vergne at least another full season in 2013.

"Jean-Eric Vergne is new, so of course all the tracks are new for him," Austrian Tost added. "But also he is a highly skilled driver. I rate him very high.

"He is doing a good job and improving from race to race and if we provide the drivers with a good car they show a good performance."