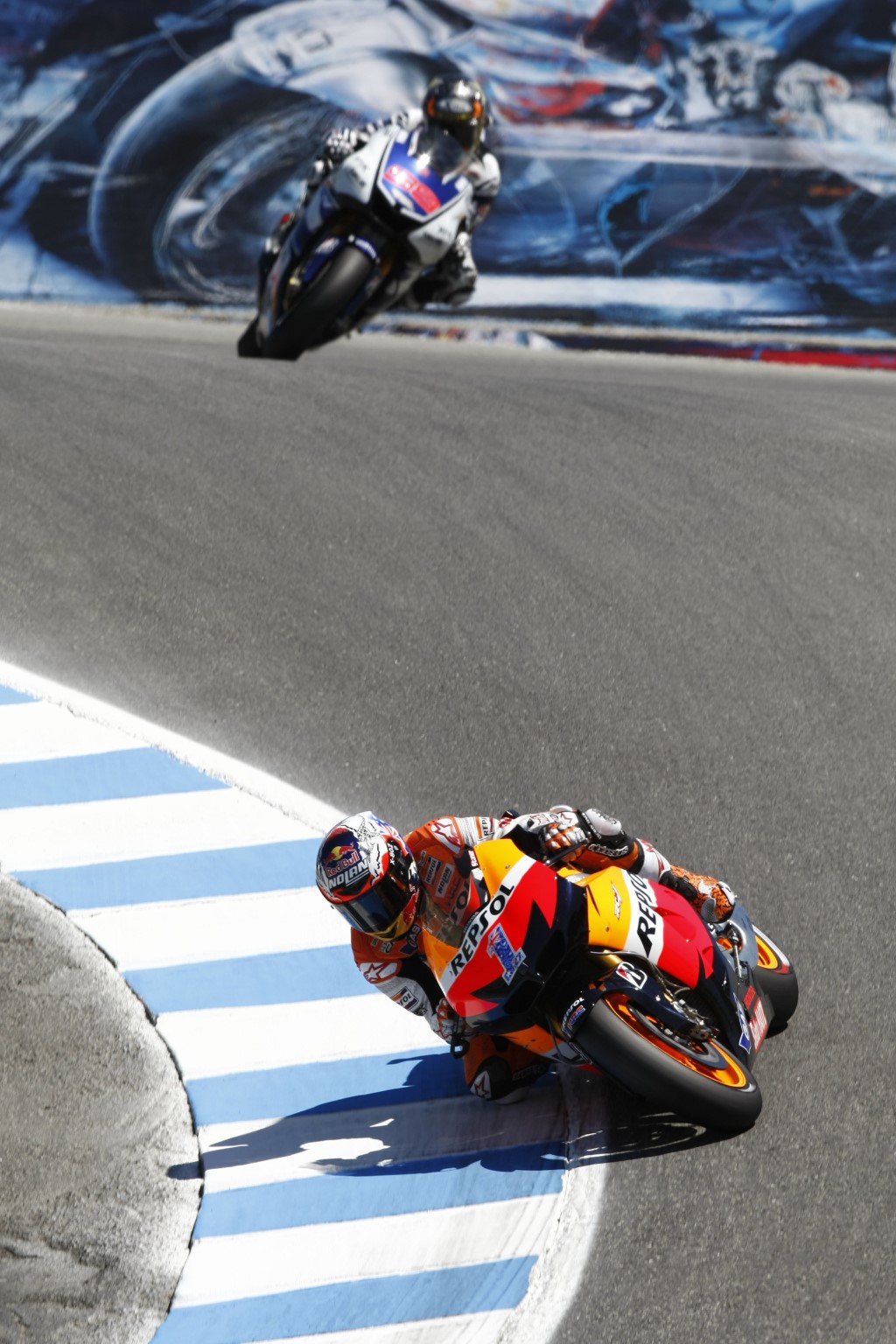 At this weekend’s Red Bull U.S. Grand Prix in Laguna Seca it was Repsol Honda Team’s Casey Stoner who recorded a hard-fought victory ahead of Jorge Lorenzo and Dani Pedrosa. It was Yamaha Factory Racing’s Lorenzo who took the holeshot into the tricky turn one, with Repsol Honda Team’s Pedrosa and Stoner in tow. Stoner was the only one of the front-runners to have started on the softer option rear tire, with the two Spaniards opting for the harder spec. San Carlo Honda Gresini’s Michele Pirro was an early crasher in the first turn, while Pramac Racing Team’s Toni ElÃ­as crashed out a lap later.

On lap two Stoner was finding his pace and made his way past Pedrosa as he started to chase down Lorenzo at the front. As Lorenzo was keeping the Repsol pair honest, Yamaha’s Ben Spies was heading up a group in fourth including Monster Yamaha Tech 3 duo of Andrea Dovizioso and Cal Crutchlow, as well as Stefan Bradl. With 22 laps reaming Crutchlow was all over the back of the rear wheel of Dovizioso, as the pair continued their season-long tussle. Back at the front Lorenzo was having to continuously hold off Stoner, who was all over the back of the Spaniard looking for a way past, as Pedrosa seemed content to look on in third. A lap later, Ducati Team’s Nicky Hayden was finding his stride in eighth, as he made up headway to the front with Valentino Rossi in tow.

As the leading trio were heading into lap 13, Pedrosa had a huge wobble before the final turn, which he was just about able to save. This did however drop him back around a second from Stoner. On the same lap, Speed Master’s Mattia Pasini was forced to retire with a mechanical issue. With 14 laps reaming Lorenzo had a slight moment going into the corkscrew, as Stoner looked to be chipping away at his lead once more. A lap later Came IodaRacing Project’s Danilo retired with a technical issue, while Paul Bird Motorsport’s James Ellison crashed out a short while later. 11 laps from the end Stoner had caught up to Lorenzo and put in a move going into turn one, just as he had done last year, to take the lead. It was not a good lap for Yamaha, as Spies crashed out of the race awkwardly whilst accelerating out of the corkscrew.

Stoner and Lorenzo were in a league at their own at the front, and with nine laps left were already starting to lap some of the back markers. On the same lap Dovizioso had fought his way back past Crutchlow, as the pair continued to race neck and neck. Shortly after Hayden had caught up to the rear wheel of Bradl, as he looked to pass the German in front of his home crowd. And with five laps remaining he had made his way through, and started to pursue Crutchlow.

With three laps left Stoner was not showing any signs of slowing down as he kept Lorenzo at bay with a gap of up to one second, while Pedrosa was a further three seconds behind in third. Providing the bulk of the entertainment in the final few laps was the Tech 3 pair, who continued to battle heavily. Yet there was drama in the penultimate lap as Rossi suffered a big crash heading into the corkscrew, for his first DNF of the season. Fortunately he was unhurt.