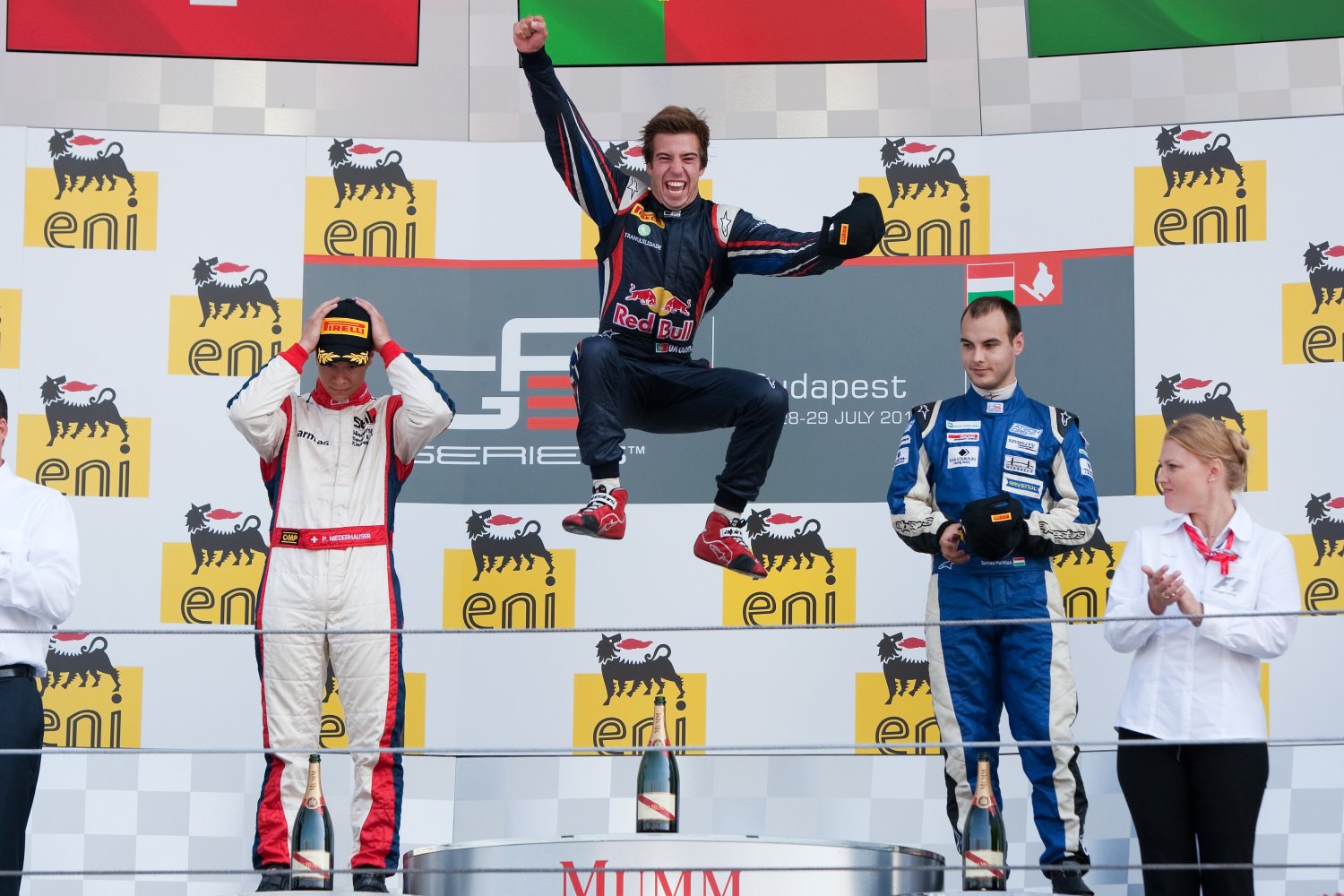 This is one weekend Portuguese driver Antonio Felix Da Costa won’t forget in hurry. After winning Race 1 yesterday, the Carlin driver started from eighth on the grid in a race dominated by strategy. He fought his way impressively through the field in the latter stages to produce a magical win, becoming the first driver in GP3 history to achieve a double victory during the race weekend. Patric Niederhauser (Jenzer Motorsport) and Tamas Pal Kiss (Atech CRS GP) finished second and third.

Heavy rain and thunderstorms greeted the paddock early this morning, with the rain stopping around 15 minutes before the race commenced. Most drivers decided to start on the wet tires, with a few drivers including Niederhauser and Alex Brundle (Carlin) taking the gamble of starting on slicks. When the race got underway, Matias Laine got the edge on his MW Arden teammate and reverse poleman David Fumanelli as the duo battled hard into turn one. Mitch Evans starting from P6 spun at the first corner, which dropped him down to 21st on lap one. Fumanelli’s race was brought to an abrupt end when he was spun and made contact with the barrier, with Conor Daly moving into P2. Aaro Vainio (Lotus GP) got the better of Kevin Ceccon (Ocean Racing Technology) at the start as the drivers found their limits around the Hungaroring with the vast amount of spray.

Tio Ellinas (Marussia Manor Racing) and Evans pitted early on for slicks, the New Zealander hoping to reclaim some vital points in his quest for the GP3 crown. Pal Kiss and Buller both made great getaways at the start, with the Hungarian driver in front of his home fans moving up from 14th on the grid to P4 by the end of lap one. Buller, starting from 23rd on the grid looked keen to try and repeat his famous victory in Silverstone by coming through from the back of the grid to a win, as the Brit’ was already up to P9 in the early stages.

Laine led the race with a one second margin, with Daly all over the back of the MW Arden machine, trying to find a way into P1. Vainio and Pal Kiss joined the battle in third and fourth, with the Finn desperately trying to make the move stick on his American teammate to take advantage of Evan’s non-scoring position. The New Zealander spun again after pitting for slicks, as the race approached the midway point when the pitlane became very busy with many drivers making the change from wets to slicks.

Of the front runners, Pal Kiss and Felix Da Costa were first to pit from P4 and P5 respectively as the track began to suit the slicks, with Niederhauser and Evans lighting up the timing screens with purple sectors. The tussle between Laine and Daly was fierce, with the Finn making his car as wide as possible to try and defend from the attacking Lotus GP driver. Vainio also wanted a piece of the action and challenged his teammate and made the maneuver work to steal P2.

With 5 laps remaining, Felix Da Costa was the highest placed driver on slicks in P7 but began lapping a massive ten seconds faster than the leaders Laine and Vainio and this is when the Portuguese ace began carving his way through the field. Felix Da Costa sliced his way through the pack, passing Daly and then with three laps to go shot into the lead of the race after passing Vainio and Laine for victory on the outside with apparent ease.

The action wasn’t over with the positions changing dramatically in the final laps, Pal Kiss and Niederhauser flying on their slicks and passing the struggling Laine and Vainio on the used wets as the track continued to dry out under the sunshine. Pal Kiss looked to have P2 in the bag until the Swiss driver overtook the Atech driver on the last lap in an exciting battle. Alex Brundle (Carlin) climbed to P4 in the final moments, as his decision to start on slicks paid off to set his personal best result of his GP3 career.
The final eight points scorers finished with Felix Da Costa jumping for joy on the top step of the podium, ahead of Niederhauser, Pal Kiss, Brundle, Ellinas, Williamson, Laine and Vainio.

Evans retains his lead in the Drivers Standings with an 18 point advantage, helped by setting the fastest lap on the final lap of the race to earn himself two points.

GP3 now has it’s summer break and will return for Round 7 in Spa-Francorchamps on Aug 31st – September 2nd.