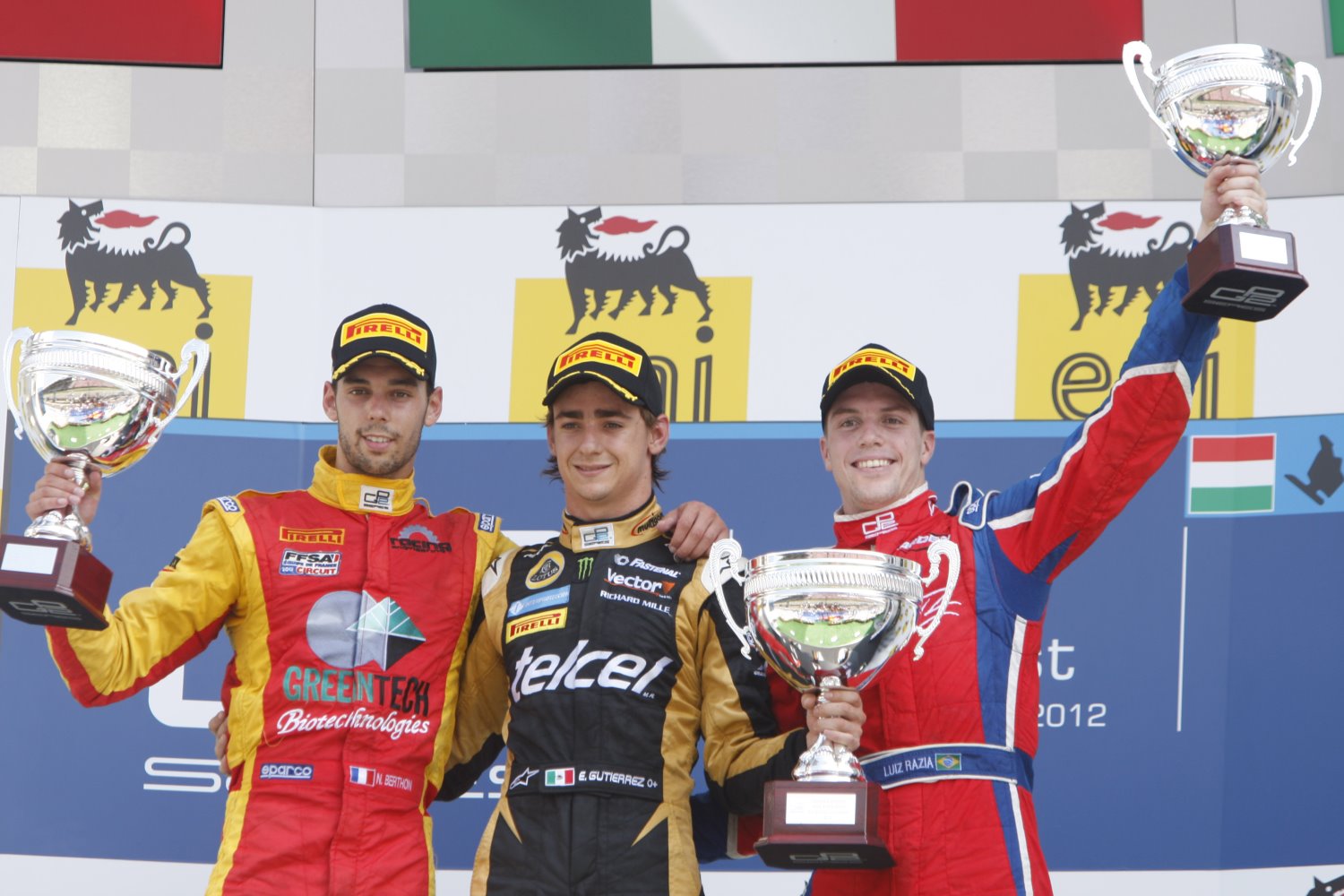 Esteban Gutierrez dominated this morning's sprint race in Budapest with a storming drive from pole, leading from lights to flag to claim his third victory of the season and put himself on the top step of the podium ahead of Nathanael Berthon and series leader Luiz Razia.

The win was set up at the start when Gutierrez eased away from the grid with Berthon on his rear wing, while behind them Giedo van der Garde slid past Jolyon Palmer at the first turn, and Razia running around the outside of the Briton at turn 2. With James Calado slow off the line, Davide Valsecchi and Max Chilton took advantage of his misfortune to follow the leaders down the road.

Van der Garde and Chilton had to start on the super soft compound after the feature race, while everyone else on the grid was on the medium tire, and their big question was how long could they make their tires last. The Dutchman was clearly in preservation mode early on, but with Razia and Palmer all over his rear it would be a tough task indeed to hold onto the podium for 28 laps.

And so it proved, as Razia bided his time until lap 19 and made a clean, clinical move up the inside at turn one to snatch the Dutchman's position. A couple of laps later and Palmer had a go too, but ran too deep to allow Valsecchi into P5, which he duly converted into P4 on the next lap with a brave move around the outside at turn two with two wheels on the grass and Palmer in his slipstream, along with Stefano Coletti two corners later.

Meanwhile Chilton's tires had seen better days too, allowing Calado a simple run through into the points, with van der Garde not fighting the inevitable pass a lap later. Up at the front Gutierrez sailed on serenely to cross the line 3.5 seconds ahead of Berthon, with Razia a further 12 seconds back. Valsecchi minimized the points loss by finishing fourth ahead of Palmer, who crossed the line with his mirrors full of Calado after a solid late run by the Briton. The final points were only sorted out on the last lap as Felipe Nasr, who had a storming drive from the back of the grid, went to the outside of Coletti at turn one but left the door open for Rio Haryanto to sneak inside and mug both of them, finishing 7th ahead of the Brazilian.

With two more podiums for his collection it was Razia who made the most of his Hungarian weekend, stretching his lead over Valsecchi to 196 points versus 189, although the Lotus pair Gutierrez and Calado were also smiling on 150 and 132 respectively, ahead of van der Garde on 129 points and Chilton on 124. In the teams' title race Lotus maintain their top position with 282 points, from DAMS on 258, Arden on 200 and Racing Engineering on 156 points as the paddock heads off for a break ahead of the next round in Spa Francorchamps.