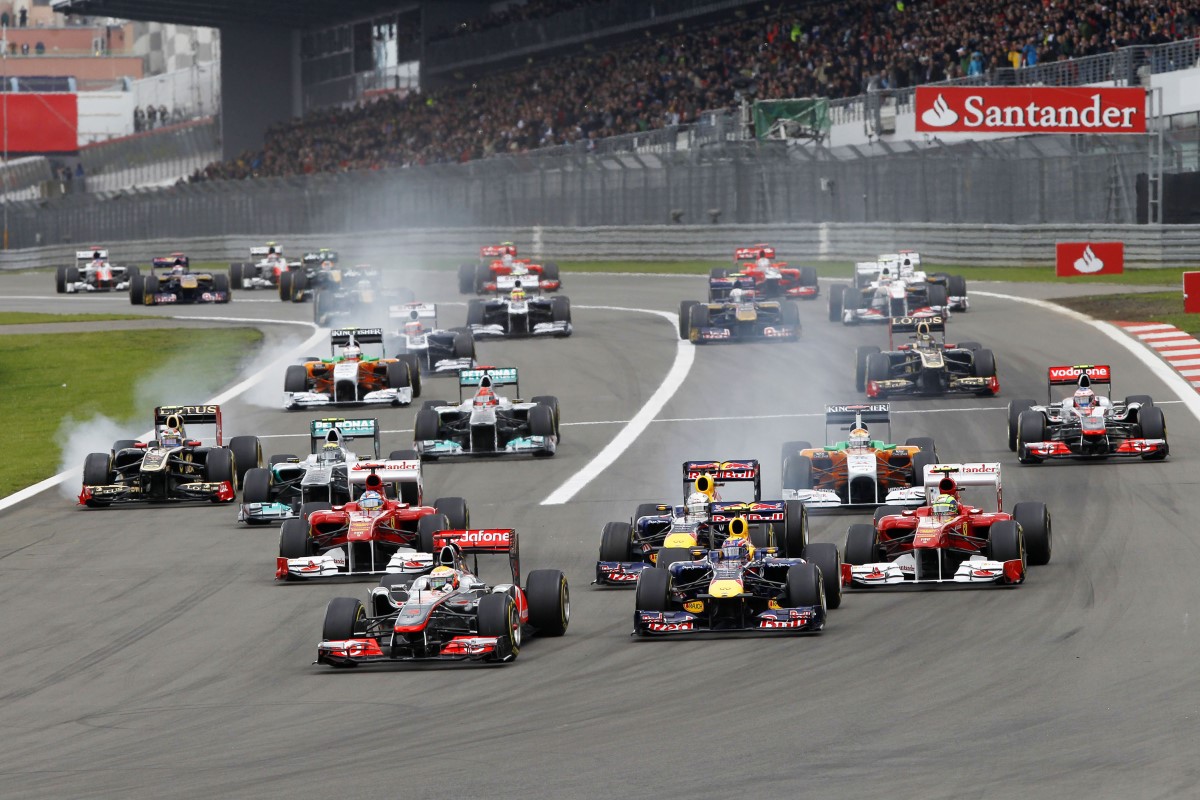 The development comes after the German grand prix host last week commenced an insolvency process, which has endangered the future of the venue's biennial formula one race.

One solution could be for the circuit's existing management to propose a buyout, amid reports the Nurburgring's current debts actually outweigh its overall value.

"If it is on the table, we would think about whether and how we would participate in the tender," Nurburgring Automotive GmbH chief Jorg Lindner is quoted by the German news agency SID.

He also revealed: "We have developed a concept for the formula one race at the Nurburgring that does not require a cash grant from the state."

Marko criticizes rule-changing and Red Bull's rivals
(GMM) Dr Helmut Marko is critical not only of the moves to change the engine mapping rules mid-season, but also of rival teams who lobbied the FIA and then refused to own up at a meeting earlier this week.

In the wake of the Hockenheim controversy about Red Bull's reportedly legal traction control and engine exhaust blowing settings, F1's governing body on Wednesday issued a rule clarification that means the team must revert to a more conventional setup in Hungary this weekend and beyond.

The move follows the FIA revealing its concern about the Red Bull solution at Hockenheim, but admitting the wording of the existing rules made it powerless to stop it.

"We were not cleared (at Hockenheim) because we falsified the evidence, but because we were within the regulations," Austrian Marko, Red Bull's motor racing consultant, told Servus TV.

He railed against overnight rule changes.

"If something is green, you can't then make it blue," said Marko.

"Nowhere does it say that we can't use the regulations in our favor."

He also criticized the behavior of Red Bull's rivals, who according to speculation lobbied the FIA for the change but were then silent in Monday's technical meeting in London.

"Again and again, there are people who do such a thing. I'm talking of the other teams," said Marko.

"Then on Monday, when we could have addressed it professionally and objectively, it is not even addressed."

Red Bull is also still annoyed about Sebastian Vettel's demotion from second to fifth at Hockenheim for his illegal pass on Jenson Button.

Marko has already referred to a "double standard" sometimes employed by the FIA when it comes to penalties, and now team boss Christian Horner says he has reviewed footage of Ferrari driver Fernando Alonso's pole lap at Hockenheim.

"On the last corner he was off the circuit with all four wheels," the Briton is quoted by Auto Motor und Sport, intimating that the Spaniard also broke the rules for advantage but was not penalized.

Germany's Auto Motor und Sport reports that one cost-cutting suggestion from a top team is that mechanics and engineers be forbidden from working on the cars on a Friday outside of the 180-minute practice period.

The apparent logic is that, just as no work is allowed in the 'parc ferme' period between qualifying and the race, the extended rule could reduce the size of the teams' race teams from 60 to 50 people.

But Auto Motor und Sport claims the small teams have rubbished the idea, claiming they vitally need Fridays to test new parts and do not enjoy all the high-tech simulation facilities that the bigger teams have back at base.

"We were at Hockenheim with 47 people, and tested quite normally," he said.

Auto Motor und Sport also revealed that proposals to designate Ferrari, Red Bull, McLaren, Mercedes, Lotus and Williams as the exclusive suppliers of 'customer cars' to the rest of the field is now definitely dead.

The report said that because some of the smaller teams threatened to take the proposal to European court, the new Concorde Agreement will continue to disallow the sale of the monocoque, suspension, nose and other fundamental areas of the cars.

Auto Motor und Sport reports that provisional plans are already being made for the teams to reveal and test their 2013 cars for the first time from February 5 next year.

The date of the first test, set for Jerez, is based on the fact that – according to the Melbourne organizer – Australia is provisionally scheduled to host the 2013 season opener on March 17 "subject to FOM confirmation".

The teams are therefore already setting dates for the 12 days of pre-season winter testing, which will be divided into three four-day tests.

The German report said the teams have agreed to simply scrap a mid-season test.

Auto Motor und Sport revealed that teams will after Jerez then move to Barcelona in mid-February, and then stay at the Circuit de Catalunya for a third and final test until 3 March.

"There is a contingency plan," said McLaren team boss Martin Whitmarsh, "in the event that we race in Melbourne on 10 March."

In that case, the February testing plans will be moved forward by a week.

That could, however, create a problem for the opening Jerez test, because Auto Motor und Sport says the Spanish venue is already booked for other activities prior to 5 February.

Marussia to conclude de Villota crash caused by 'mistakes'
(GMM) Marussia is tipped to reveal in the coming days that Maria de Villota's test crash was the result of a "chain of unfortunate circumstances and mistakes".

The team recently insisted that, following an internal investigation, a failure of the 2012 car had been ruled out as the cause of the incident.

Spaniard de Villota, 32, is currently in a Madrid hospital, having spent 17 days in a Cambridge (UK) hospital recovering from severe head and facial injuries that required the amputation of an eye.

"We're now 100 per cent confident that the car was not to blame in the slightest," team boss John Booth said at Hockenheim last weekend.

An external investigation is now underway, but Booth warned that it will be a "very long process".

In the meantime, Germany's Auto Motor und Sport said Marussia is planning to release "within the next ten days" a further report about the circumstances leading up to de Villota's impact with a stationary truck.

The report said the finding will depict a "chain of unfortunate circumstances and mistakes" that led to the front of her helmet striking the truck loading ramp.

Auto Motor und Sport said de Villota's trajectory from the Duxford runway to the temporary pits included a curve, resulting in her struggling to find the clutch lever as the steering wheel was not in the normal 9 and 3 o'clock position.

Spaniard de Villota had reportedly already forgotten to push the neutral button, and with cold tires and brakes then struggled to stop the car as the 750hp engine powered it forwards in a low gear.

A role may also have been played by "panic", or "doing the wrong thing at the wrong moment", the German publication added.

Dennis 'pretty sure' Hamilton to stay
(GMM) Ron Dennis on Thursday said he is "pretty sure" Lewis Hamilton will stay at McLaren in 2013.

But the company's executive chairman, who as team boss in 2007 brought the former world champion into F1 100 grands prix ago, took exception to the common view that it is 27-year-old Hamilton who is wielding the most powerful hand in the negotiations over his next contract.

"There's no reason Lewis won't be driving our cars in the future," Dennis told BBC radio.

"I think people get the wrong impression though, as when I last looked at the contract I was paying him. It's a question of whether we employ him, not the other way around."

Dennis continued: "But if things pan out the way I expect them to I'm pretty sure he will be sat in a McLaren next year."

Last week, Marussia's 32-year-old test driver was transferred from a Cambridge hospital to her native Madrid, 17 days after suffering horror injuries in a straight-line aerodynamic test.

After a six-day stay, she then finally went home on Tuesday, La Paz hospital confirmed.

"The patient is in good general condition, so she was discharged from hospital yesterday," said the Spanish hospital.

La Paz added that the hospital's plastic, neurology and eye departments will follow up their treatments.

After last weekend's German grand prix, the Red Bull driver hit out at McLaren driver Hamilton's decision to overtake him despite being a lap down.

"It's a bit stupid to disturb the leaders," the official FIA transcript of the post-race press conference quotes Vettel as saying at Hockenheim.

But world champion Vettel insisted in Budapest on Thursday: "I didn't say it was a stupid decision.

"If I say after the race that I think it was unnecessary and then it gets quoted that I said he is stupid, it is quite disappointing."