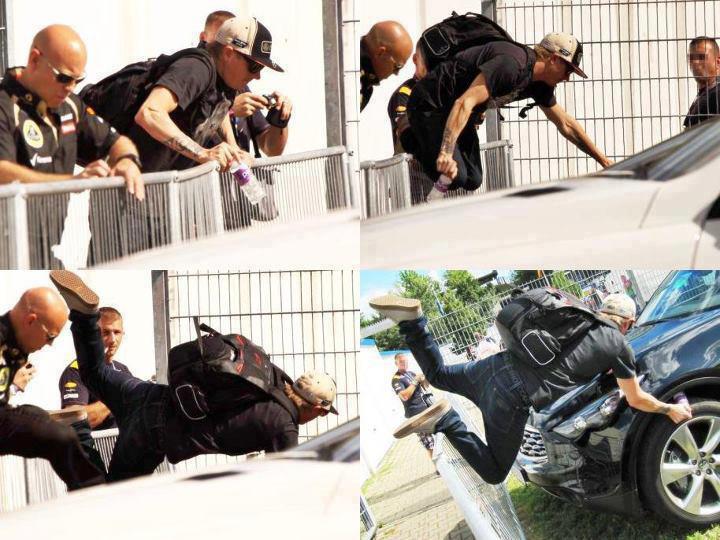 At some point between midnight after Sunday's Hungarian grand prix, and the resumption of action at of September's race at Spa five weeks later, all the teams will lock their doors for a full 14-day period.

The cost-cutting measure has been in place for the past few seasons.

"As it happens we're also shutting down our automotive production at the same time, even though we don't need to do it," McLaren team boss Martin Whitmarsh is quoted by Press Association.

"And we're not doing it to avoid any aspersions being cast by other teams. It is a separate company."

Whitmarsh said he is not sure if rival Ferrari is also closing its separate road car plant.

Despite Bernie Ecclestone's earlier intimations to the contrary, it emerged at Hockenheim that Mercedes is in fact still yet to agree to the terms of the new deal.

It is believed a major sticking point is that top rivals McLaren, Ferrari and Red Bull have all been offered places on F1's post-floatation board, but not Mercedes.

Indeed, in an interview with McLaren boss Whitmarsh posted on F1's official website, the transcript quotes the questioner as saying that only "three team members from Ferrari, Red Bull and McLaren" will be on the board.

"I don't think that it is a secret anymore that nine teams have signed the contract — and I really hope that the silver team next door (Mercedes) will sign very shortly and it will be then that we will take up our board position," said Whitmarsh.

Another major hurdle to the finalization of the 2013 Concorde is the fact that the FIA is also yet to sign up.

When asked about that, Whitmarsh answered: "Well, my fear is that at the moment the deal hasn't been done and therefore it adds some volatility to the situation.

"At times formula one has lost opportunities because of inner frictions."

The Briton did, however, admit that it would be "possible" for formula one to live without its current governing body.

"But I don't think it is a productive thing," added Whitmarsh.

Interestingly, Whitmarsh – the head of the now-fractured teams alliance FOTA – also revealed that teams are in fact not signing a single Concorde Agreement, but a swathe of "individual contracts".

"If we (McLaren) were not happy with our contract we wouldn't have signed it, so I am not complaining, but the danger is that if we all have individual contracts that is probably not aligning us and bringing us together," he said.

"It (the Concorde Agreement) has never been perfect, but it's a model that before we abandon it we should be very cautious. Why reinvent something if it functions?"

Vettel penalty like 'death for chicken stealing'
(GMM) Red Bull has stepped up its attack on the FIA after Sunday's German grand prix.

After stewards demoted Sebastian Vettel from second to fifth place for his late-race pass on Jenson Button, Dr Helmut Marko admitted it had left an "aftertaste".

On Monday, he suggested the governing body often applies a "double standard", punishing some for identical infractions and not unnamed others.

Jean-Eric Vergne, a rookie selected by Marko for Red Bull's secondary team Toro Rosso, agreed that Vettel only left the circuit because he was forced wide by Button.

"In Sebastian's place I would have done exactly the same," the Frenchman said.

"That warning did not come," he revealed.

Some F1 insiders suspect there could be more to the recent 'FIA versus Red Bull' wrangling.

In Germany's Bild newspaper, it is noted that "In formula one, it is no secret that Bernie Ecclestone is on Red Bull's side".

And the F1 chief executive is "the archenemy of FIA boss Jean Todt".

At present, the sport's most powerful pair are arguing about the vital and lucrative Concorde Agreement.

Vettel has vowed to do his best to give stewards no possible reason to punish him this weekend in Hungary.

"I will be careful to do nothing that could jeopardize the result," said the German.

But in the immediate aftermath of the Hockenheim result, the Finn would enjoy a dose of good luck — and then a reminder of harsh reality.

When his friend Sebastian Vettel was penalized post-race for the illegal pass on Jenson Button, Finn Raikkonen inherited the podium.

But, according to Bild newspaper, he then crashed.

The newspaper has published a photograph of the 2007 world champion tripping whilst jumping a fence to the paddock car park, and landing awkwardly on a car.

"Kimi was rushing," said an observer, "as he took a shortcut to the car park.

"His right foot got caught on the fence and he fell onto a car. He cried out 'f**k' and quickly got up and going again." Red Bull must change engine maps for Hungary
(GMM) Red Bull will be reverting to a standard engine mapping setting in the days ahead of the Hungarian grand prix.

Italy's Tuttosport is reporting that formula one's governing body will shortly formalize their advice to teams that what was uncovered at Hockenheim last weekend will no longer be tolerated.

The FIA's Jo Bauer had flagged up Red Bull's engine settings at Hockenheim, admitting he thought the 'maps' on Sebastian Vettel and Mark Webber's cars were not legal.

The stewards, however, found that while the settings were suspect – reportedly amounting to a form of legal traction control and increased engine exhaust blowing – the letter of the existing rules prevented them from taking action.

So Tuttosport said a clarification of the rule will now "be formalized in the next 48 hours".

Correspondent Livio Oricchio said the FIA told teams on Tuesday that the text of the relevant regulation will be tweaked to "avoid the interpretation" that was cited by Red Bull in the stewards' room at Hockenheim.

"We rely on the regulator, the FIA, to make sure the fight is fair," Ferrari team boss Stefano Domenicali said.

"He reminds me of myself, and a little bit of Prost," Austrian Lauda is quoted as saying.

"We were analytical, and Fernando too has a vision of the race that no one else can match."

"I am amused with all the polls about who is the best now in formula one, and I am amazed when I see there is doubt.

"I do not: Alonso is number one, (he's) in another dimension to the others," he said.

Quadruple title winner Prost said: "Fernando does things calmly, and knows how to get out the most even without the best equipment."

1997 champion Villeneuve shared the Renault garage with Alonso for a time, noting that the almost 31-year-old is "the only one who makes no mistakes".

"Yes, obviously he is the big favorite for the title," the French Canadian added.

1996 winner Hill added: "I admire the work done by Ferrari, but that the team is now so competitive is also to his (Alonso's) credit."

Despite a few too many incidents, the Swiss-born rookie Frenchman has been a revelation of this season, especially in light of his mediocre and abortive 2009 debut.

Lotus boss Eric Boullier and owner Gerard Lopez have indicated they are happy with both Grosjean, 26, and the team's other new driver Kimi Raikkonen.

Still, Grosjean is hoping he definitely stays in 2013.

"Hopefully, if all goes well, I will be with the team next season," he is quoted as saying by the French language website f1i.com.

"This will allow me to build up this year and compete in 2013 on a better footing," added Grosjean, who has been on the podium twice this year but failed to finish five of the 10 races so far.

He said: "We already know what has worked and what has not, so this will give us more time to do things perfectly.

"I hope I will be retained. If I continue in this way, I think I have a good chance."

The website said Grosjean sponsor Total's contract with the Enstone based team expires at the end of the season.

In Auto Motor und Sport, he said he was "surprised" by the "lack of interest" in the German grand prix amid the fascinating 2012 season.

Indeed, Germans have seldom had more to cheer about in F1, with the grid boasting legend Michael Schumacher, the reigning world champion Sebastian Vettel, three other race drivers and the Stuttgart marque Mercedes.

"Certainly, the ticket prices are extremely high and the financial crisis has an effect, but isn't this also true in England and Spain?" wrote Schmidt.

Indeed, in crisis-gripped Spain, 82,000 spectators turned out to watch Fernando Alonso in May.

Hockenheim boss Georg Seiler said the attendance figures for this year's race has allowed the circuit to break even.