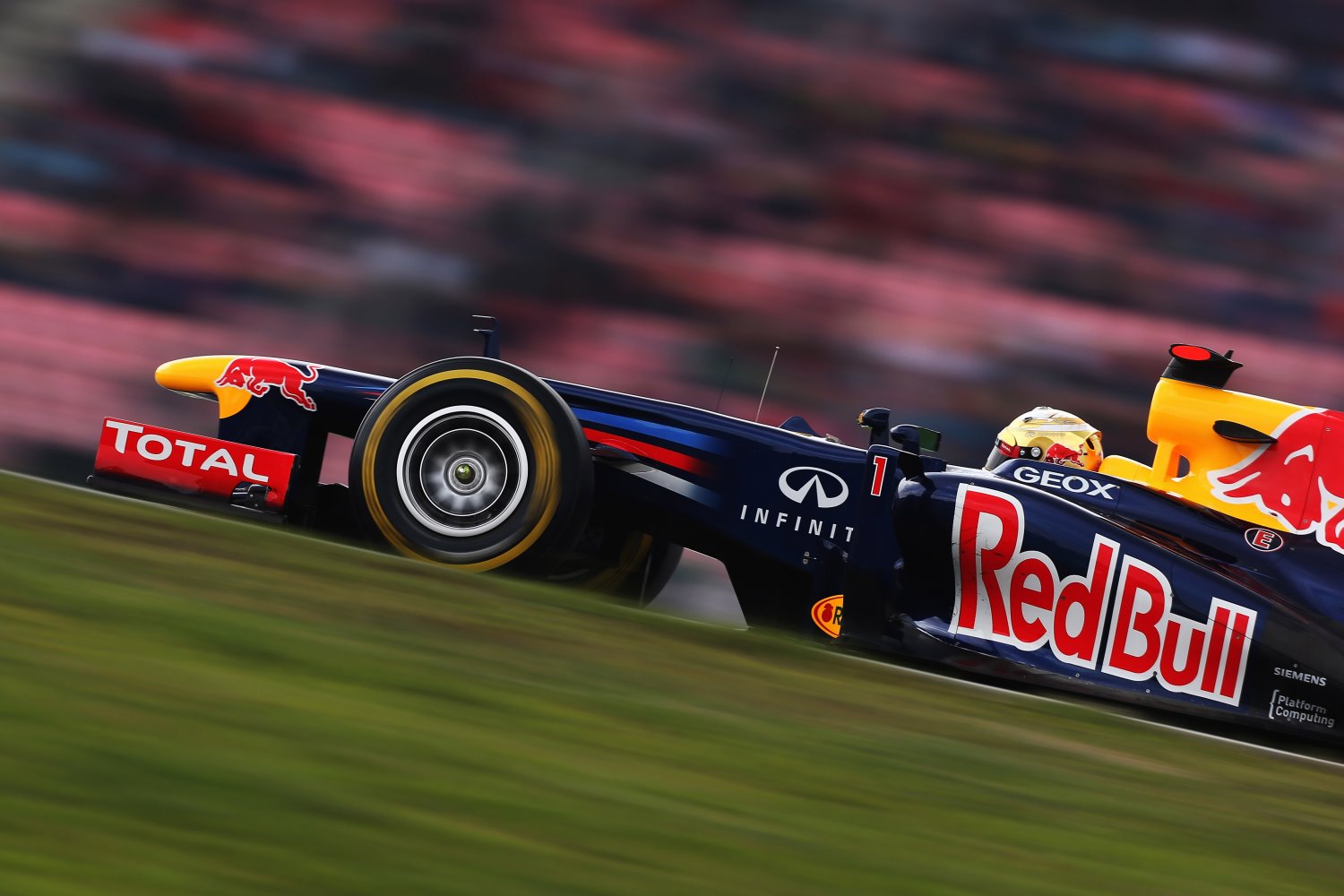 German Vettel disliked the way Hamilton overtook him despite being a lap down during the German grand prix.

"That was not nice of him," said Vettel. "It's a bit stupid to disturb the leaders."

When told about the 25-year-old's comments, Briton Hamilton responded: "Hmm. Maturity has come through I guess. It shows his maturity."

Vettel even suggested Hamilton had made the move in order to disturb him in his battle with the sister McLaren of Jenson Button.

But Button insisted: "He (Hamilton) is allowed to do that."

"Racing drivers race. If that's stupid, I don't know what else is.

"He was quicker, overtook and pulled away, so I'm not quite sure of the stupidity. That's for others to comment on I suppose."

Indeed, others sensed more – even F1's high-stakes politics – was at play.

Rumors were swirling in the paddock that tensions between the two camps had swelled again, amid suggestions it was McLaren who blew the whistle on Red Bull's iffy engine maps.

"That's the nature of formula one," said Red Bull boss Christian Horner. "You are always going to get other teams who will speculate that you have done wrong."

Writing for Der Spiegel, correspondent Ralf Bach smelled an even bigger rat, with the pre-race torque map controversy and Vettel's post-race penalty all in the mix.

The conspiracy theory is that the FIA is clamping down on Red Bull amid the reigning world champions' refusal to agree new cost-limit regulations.

Referring to Vettel's penalized pass on Jenson Button, Dr Helmut Marko observed that, "normally, the race director would have sent an email that he should have let Button back past.

"Not this time," the Austrian said.

The post-race drive through penalty cost Vettel not only second place, but also third and fourth.

Vettel: The move showed respect for Button
Sebastian Vettel’s home Grand Prix was ultimately a disappointing one. The Red Bull driver was handed a time penalty of 20 seconds for illegally passing Jenson Button while outside the confines of the rack track on the penultimate lap. He dropped from second to fifth position and is now 44 points off Fernando Alonso’s championship lead.

“We had a decent race today although there wasn’t enough pace when we got close to Fernando and we also lost a position to Jenson who had a good pit stop and came in earlier. A couple of laps before that, I lost some time with Lewis (Hamilton) as he unlapped himself.

“At the end of the race, Jenson’s tires were gone and we were able to close the gap again. It was then a question of when, rather than where, and I tried to outbreak him. He opened the break again and then was up the inside; I wasn’t sure where he was, I couldn’t see him in that moment, so decided to give enough space and went off line on the slippery paint and I was able to stay ahead and get past him.

“The only intention was not to crash and to give him enough room. I have respect for him and I didn’t want to squeeze him. It was good to be on the podium at the home race, but I have to respect the stewards’ decision."

The revised result sees Button claim second place as Kimi RÃ¤ikkÃ¶nen jumps up to third, with Kamui Kobayashi celebrating a best ever finish in fourth position.

Hamilton hopes Kovalainen gets fast car for 2013
(GMM) Lewis Hamilton would be happy to share the podium once again with his former McLaren teammate, Heikki Kovalainen.

Paddock speculation has linked Finn Kovalainen, who was Hamilton's teammate in 2008 and 2009, with a return to the upper half of the grid for 2013.

Kovalainen, 30, struggled during his stints with Renault and McLaren, winning just a single race, but he has rebuilt his reputation with startup stragglers Caterham.

Hamilton and Kovalainen each celebrated their 100th grand prix weekend at Hockenheim, but both suffered races they would rather forget.

Indeed, Hamilton said on the radio that he would like to retire his damaged McLaren, and later stood by his desire to give up.

"I don't understand the point in driving around in a broken car. I was just driving for the sake of driving," said the Briton.

Kovalainen also struggled at Hockenheim, but Hamilton nonetheless tipped him as a contender for a much better car in 2013.

"Heikki has shown himself to be one of the fastest drivers," he is quoted by the Finnish broadcaster MTV3.

"Unfortunately, he does not have a very good car now, but he's still shown many times that he is strong, consistent, mentally focused and very fast," said Hamilton.

"I really hope he will get the chance to have a faster car, so that we can be racing against each other once again."

Ecclestone's motor home in Germany, Ecclestone not
(GMM) Bernie Ecclestone's familiar paddock motor home with its blacked-out windows was in the Hockenheim paddock, but the F1 chief executive did not show.

The Hamburger Abendblatt newspaper said it is "not known" if the 81-year-old feared being arrested for corruption by German police.

What is known is that, even until the eleventh hour of the weekend's German grand prix, the diminutive Briton was widely expected to be in the country.

For example, Nurburgring officials Jorg Lindner and Kai Richter had travelled to Hockenheim specifically to meet with Ecclestone to discuss their circuit's crisis.

"They waited and waited, but Bernie did not come," a correspondent for Suddeutsche newspaper said.

“It was like a 67-lap qualifying run!" the Team Principal said after a distinctly tense afternoon of racing at Hockenheim. “I find it hard to remember watching from the pit wall such a tight race from the start to the checkered flag.

“Fernando was perfect: not one mistake, not one hesitation, pushing to the maximum for an hour and a half. What a driver! The team were also great, managing everything to perfection. We expected to face some stiff opposition and that was the case: to keep ahead of them, we had to do a better job."

Despite the performance, and with McLaren having improved significantly, Domenicali admits that the Ferrari F2012 is still not the quickest car on the F1 grid.

“We know we still have a lot of work to do because we are still not the fastest," the Italian continues. “We have seen how quickly things can change this season, therefore we must keep concentrating to the maximum, especially on the reliability front."

With Alonso leading and Felipe Massa 14th for drivers’ honors, Ferrari remains second in the Constructors’ Championship but now only 17 points ahead of McLaren.

Mercedes admits that car is too slow
Mercedes leave Hockenheim braced for another tough weekend in Hungary, hoping to gain more speed for when Formula 1 regroups at Spa in September. Attempting a different strategy in Germany, Michael Schumacher managed only seventh position.

Schumacher’s race was a strong one, not least as he pulled a pass on Nico Hulkenberg in front of thousands of Mercedes employees, but the seven-time World Champion was unable to make any significant impression after running third in the early stages. Teammate Nico Rosberg scored the final point from 21st on the starting grid.

“We ran the race as well as we could today, in the knowledge that we would have to make three pit-stops," explained Team Principal Ross Brawn. “Some of our rivals on two-stop strategies faded towards the end but the drop-off was not sufficient for our drivers to be able to take advantage on fresher tires.

“Michael and Nico put in consistent performances, pulled off good overtaking moves and we delivered six clean pit-stops. Our strategy enabled Nico to climb 11 positions from his starting place, while Michael finished in seventh place for the second time in two weeks.

“We made the right decisions this afternoon but, after 67 laps, Michael found himself 29 seconds behind the winner. That shows we need to find more pace from the car."

At the halfway point of the 2012 Formula 1 season, the Mercedes factory squad sits fifth in the Constructors’ Championship and is trailing Red Bull by 125 points.

Reigning world champion Vettel was demoted from second to fifth after stewards ruled he gained an unfair advantage by passing Jenson Button whilst off the track.

The penalty imposed was a drive-through, which because handed down after the race was converted to a 20-second race time addition.

"It was disproportionate to the offense," said David Coulthard, who according to Germany's Auto Motor und Sport said that sort of move happens regularly in DTM.

Whiting does not disagree.

"The punishment is very hard," he admitted when asked about Vettel's demotion.

"Unfortunately at the moment we have nothing else to choose from."

It is believed the FIA is looking into introducing a raft of new penalties, including a mechanism that could delay a driver for as little as five seconds in total.

"Work is still ongoing as per the technicalities," Auto Motor und Sport said.

Undoubtedly at the very top of the agenda will be the Red Bull engine mapping saga that gripped the Hockenheim paddock mere hours before Sunday's German grand prix.

Ultimately, the FIA admitted it could not penalize the team, even though stewards insisted they did not "accept all the arguments" put forward by Red Bull.

The suggestion is that Red Bull adhered to the letter of the law, but not the "spirit".

"The rules are in black and white and, having looked at the evidence, the FIA were fully satisfied."

But a cleaning-up of the rules is now regarded as likely.

"This must be stopped," Peter Sauber said clearly. "Otherwise all that happens is a lot of money is thrown out of the window.

"And that is clearly what the FIA wanted to avoid with the new rules," he added.

Even Martin Whitmarsh, the head of the powerful McLaren team, agreed that leaving the current rules alone would lead to "an arms race" that will cost "a lot of money".

McLaren sets new pit-stop record
McLaren has suffered more than its fair share of pit-stop gremlins in 2012, but since Silverstone the Woking team has been red hot with its wheel changes. At Hockenheim, it managed a new world record of 2.31 seconds for Jenson Button.

“Although there's previously been some negative talk about our pit-stops, the boys did an unbelievable job today," Button said after the German Grand Prix. “My fastest stop was a 2.31 seconds – I'm told, the fastest pit-stop in history."

Button’s second place and resultant 18 points helped to lift McLaren back ahead of Lotus for third position in the Constructors’ Championship.