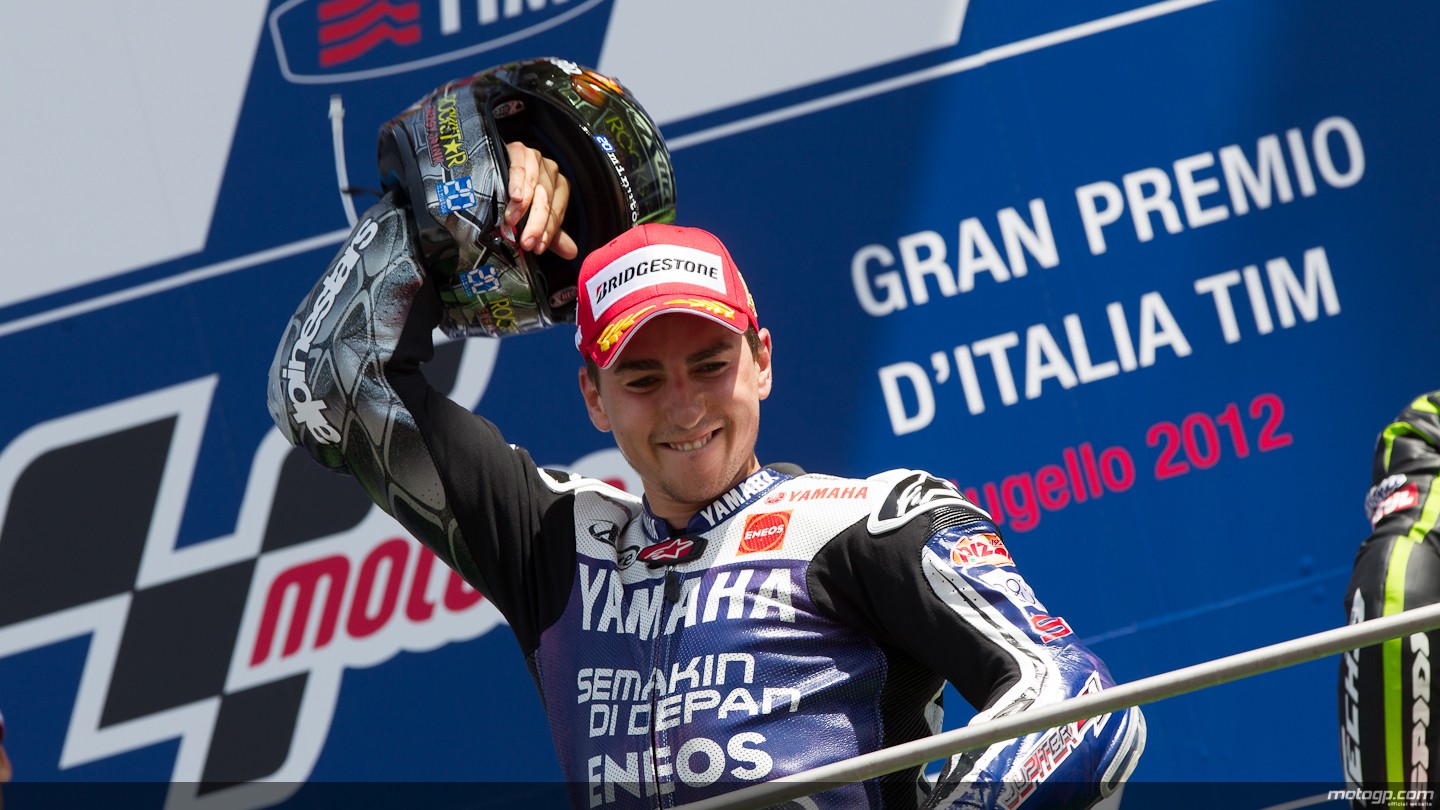 Repsol Honda Team’s Pedrosa led into turn one, however Jorge Lorenzo got past into the lead within a few bends, as the grid diced for positions in the early stages. Monster Yamaha Tech 3’s Andrea Dovizioso also pushed past Pedrosa, as Ducati Team’s Nicky Hayden and LCR Honda MotoGP’s Stefan Bradl fought for fourth. Repsol Honda’s Casey Stoner, the only rider to use the special construction rear hard tire, did not have a great start, and had to fight his way past Pramac Racing Team’s Héctor BarberÃ¡ to make up positions. Meanwhile San Carlo Honda Gresini’s Michele Pirro was black flagged due to a cutting the track as he was heading back into pit lane with a technical issue.

Two laps on, Pedrosa was all over the back of Dovizioso, as Lorenzo started to pull out a small gap at the front. Ducati’s Valentino Rossi had fought his way up to seventh, much to the delight of the home crowd, yet was having no easy ride, as Tech 3’s Cal Crutchlow was looking for a way past on his satellite Yamaha. With 15 laps remaining Stoner’s tires had come up to temperature, and the Australian managed to push his way past Hayden into fifth. A lap later Bradl put in a brave move on Dovizioso in turn one to slot into third. This was followed up by big drama as Stoner ran off track into the gravel, managing to keep the bike upright and re-joining in tenth.

Avintia Blusens’ Yonny Hernandez meanwhile crashed out of 18th place, but managed to walk away unhurt. NGM Mobile Forward Racing’s Colin Edwards also had his race cut short as he retired with a mechanical issue. With eight laps remaining the grid had spread out, yet Crutchlow was still dicing with Rossi. A lap later Stoner had caught up to the back of San Carlo’s Ã�lvaro Bautista, and put in an aggressive move, pushing the Spaniard wide and moving up into ninth. The final three laps promised further excitement as Dovizioso went past Bradl on the brakes into third, while Hayden, and the pursuing duo of Rossi and Crutchlow closed in on the podium battle. In the final lap Hayden made his way past Bradl, who fought back with a hard move, which pushed the American wide. This let Rossi through into fifth, with Crutchlow also taking advantage to nip into sixth.

Yet ultimately it was Lorenzo who took the checkered flag for his second successive victory at the track in front of Dani Pedrosa and Andrea Dovizioso, who recorded his fourth podium of the season. Bradl was however one of the happiest riders, as he recorded his best ever finish in the premier class. Fifth spot went to Rossi, followed by Crutchlow, Hayden, Stoner, BarberÃ¡, Bautista and Yamaha’s Ben Spies, who was suffering from food poisoning. Top CRT spot went to De Puniet in 12th. Lorenzo now has a 19-point gap at the top of the championship ahead of Pedrosa and 37 ahead of Stoner.