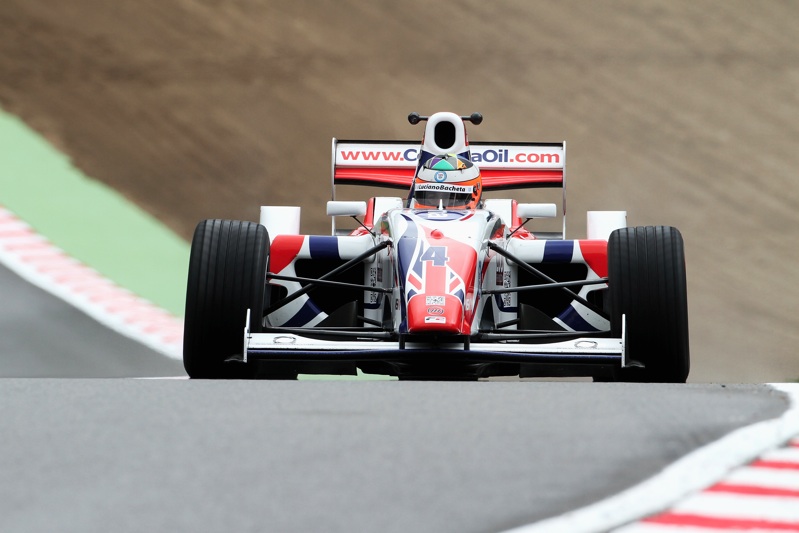 The 22-year-old Italian who holds British citizenship posted a best time of 1:22.806s, in the last few seconds on the damp but drying track to just edge out Max Snegirev with the Russian claiming his best ever qualifying result. Polish racer Kevin Mirocha ended in third with Dino Zamparelli, one of a handful of drivers to opt for slicks, in fourth and Swiss teenager Matheo Tuscher completing the top five for this afternoon's opening race.

Overnight rain left the 2.3-mile circuit damp but with no further rain expected, it was likely to dry out during the 30-minute session. Even so, all the drivers began on wets with a trio of Brits in Bacheta, Zamparelli and Hector Hurst setting the early pace. Mihai Marinescu then interrupted the all British front-row with the times creeping down as Mirocha added his name to the pole contenders.

At the halfway stage, championship leader Bacheta still led the way and by more than a second from Mirocha after going purple in each sector on his 11th lap. Just outside the front-runners, Snegirev was looking strong in fifth together with yesterday's pace-setter Markus Pommer.

Axcil Jefferies then decided to brave a slick tire run, the first driver to do so, although could only manage a best of 11th. Pommer also sat in the pits on a fresh set of dry tires but sadly a car issue ended his session with the German forced to watch the remainder from the pit wall.

With five minutes left on the clock, Bacheta was now leading from Alex Fontana before the Swiss made a trip into the gravel at Paddock Hill, bringing out waved yellow flags and leaving him in P7.

Mirocha then went top with Bacheta almost stealing his P1 start until a poor final sector allowed Snegirev to jump ahead and momentarily hold onto pole. Bacheta had time for one more lap though which in the end cleared the Russian's time by more than half a second. Marinescu finished sixth with Daniel McKenzie further down in ninth and Kourosh Khani bouncing back from his high-speed Spa crash to claim 10th.

Speaking afterwards Bacheta said: "It was one of those sessions where the track was always changing and you didn't know if you needed to be on slicks or not so it wasn't a typical sessions where we usually do two runs. I went out to see what the track was like and every lap it was getting faster and faster and the tires didn't drop off so that said to me even if does get quite dry I'll stick to wets because the tires were holding up really well. I saw it wasn't going to rain any more, the track was getting drier and drier and knew my last lap would be the best so I had a cool down lap and pushed for the last one."

A five-place grid penalty for Zamparelli from Spa means the Brit will start from P9.