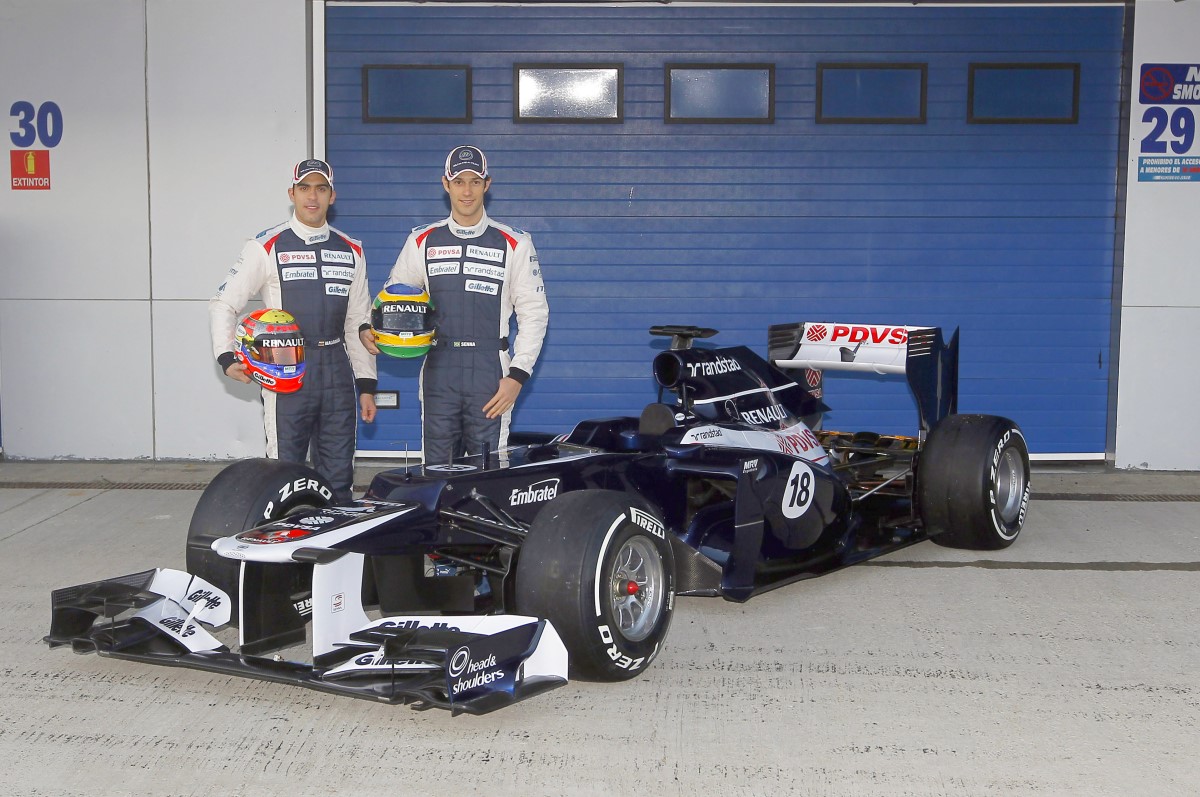 Ever since that fateful day at Imola in 1994, Williams' small and silent tribute to the great Brazilian has been visible to eagle-eyed spectators.

"We've dropped that (now)," Williams, now 70 but still the team principal, told the Guardian. "It's time. And, also, we've now got Bruno."

He is referring to Bruno Senna, the great Senna's nephew who now races a Renault-powered Williams.

Senna, 28, is commonly written off as a pale comparison to his famous uncle, riding on the back of sponsors and his surname.

But Williams insists they are not the reasons Senna got the drive.

"Bruno was just a good candidate and a very intelligent person. There were no negatives — just some good, positive reasons to say 'Yes, let's give him a go'."

But it is Senna's fabled uncle that Williams names as his favorite Williams driver.

"I was very emotional about it (his death) because it was one of our cars and he was such a special person. He was immensely charming, but also tough, ruthless and brilliantly gifted," he said.

Sir Frank has stepped down as chairman and even as an active board member of his team, but he is still the 'team principal' and has taken back some of the tasks completed previously by the recently-departed Adam Parr.

"I'm at work every day of the week because there is a lot to do and I love F1," he said. "I'm just not ready to make a dramatic change in my life — like staying at home."

As weather forecasters predict another wet day in rural Northamptonshire, organizers of the British grand prix are at least urging spectators to battle the mud and the traffic to attend on Sunday.

And although qualifying was red-flagged for a long time on Saturday, F1 chief executive Bernie Ecclestone insists he is "not worried" the race might have to be called off.

"The race will go on — we will do our job and it promises to be a great race," he told the Daily Mail.

"But I am worried about the weather and the fans. I don't want a repeat of Friday's scenes, but the forecast for Sunday is bad and we are expecting more people than on any other day.

"This is why I've told all my friends not to come. It feels strange telling them that, but I am thinking of them," said the 81-year-old.

The Times journalist Kevin Eason surmised the prospect for Sunday: "It will be a day for heroes and wellingtons."

Over the past few years, in the wake of his rescue of his beloved Hinwil based team after BMW's shock departure, the 68-year-old has continually hinted that the day Monisha Kaltenborn steers the ship alone is coming soon.

But, recently, he began to backtrack, admitting simply watching the races on TV would be "the worst thing of all".

And during a new interview with Kleine Zeitung newspaper, Sauber was told by the reporter: "So you want to retire at the end of the year …"

Sauber responded: "Who said that?"

"That's what we've read in the media for months," the journalist informed.

Sauber answered again: "There is a lot of interpretation. No.

"When I bought back the company from BMW, it was clear that Monisha would take over the management.

"I have also said that I don't want to be a 70 year old on the pitwall — that would be October of next year.

"But the exact time when Monisha is the team leader is still open," added Sauber.

Perhaps he is hanging on for the team's first victory of the post-BMW era, after Sergio Perez came close a couple of times in 2012 already.

Sauber is proud of bringing on new talents like the Mexican, who is tipped eventually to go to Ferrari.

"I opened the way for Schumacher in formula one in the Mercedes days," said Sauber. "And there was also Raikkonen, Massa, Kubica …

"We have a good car now, but we are still missing something for the victory, as errors happen again and again."

Is the missing link a truly great driver — like Fernando Alonso?

Grosjean 'has been faster' in quali – Raikkonen
(GMM) With not an excuse or embellishment in sight, Kimi Raikkonen has issued a typically blunt appraisal of his qualifying record so far in 2012.

Until Saturday's rain-affected session at Silverstone, Raikkonen had only outqualified his teammate Romain Grosjean on a single occasion in 2012.

So when asked by the Finnish broadcaster MTV3 to appraise the reasons for his 6-2 defeat to Grosjean on Saturdays, the 2007 world champion answered: "The explanation is very simple.

"He has been faster than me."

In the races, however, he has outscored Frenchman Grosjean by 20 points.

"Of course I always try to be in front, but it hasn't always gone as I would like," said Raikkonen.

Hamilton insists no 'emotion' in McLaren talks
(GMM) Lewis Hamilton has said he will sideline emotion during his forthcoming negotiations for a new McLaren contract.

Flagging a salary dispute, team supremo Ron Dennis recently admitted he hopes the fact he groomed Hamilton from childhood to championship glory will play a factor in the 27-year-old's deliberations for 2013 and beyond.

But when asked if McLaren and Dennis' long support and devotion will indeed play a role in the talks, Hamilton told O Estado de S.Paulo that reality is different.

"Of course Ron is going to say that — 'you started your life with us', as he always does," the Briton is quoted as saying.

"And I will always thank him for what he did for me. Even after I won in Montreal last month, in the moments after the podium I told him 'thank you for giving me this opportunity'.

"Now … I don't think this is about my contract negotiations. Business is business," Hamilton insisted.

When asked how the negotiations are proceeding, he answered: "Almost everything is decided already, but I can't say anything now."

At any rate, he is feeling confident about the future, with his former nemesis Fernando Alonso suggesting recently that only himself and Hamilton can win races at the wheel of inferior cars.

The implication was that Sebastian Vettel is not quite at that level.

When asked about Alonso's claims, Hamilton said: "I have my opinion about it, but it's not appropriate for me to say what it is.

"I'll leave it as what is said between the drivers," said the 2008 world champion.

"But it would be very interesting to see the three of us with the same car. Maybe Fernando is right.

"I have been teammates with Fernando, and I'd love to be with Sebastian as well. It would not be a problem for me."

Paddock crowns Alonso greatest current driver
(GMM) As he races away with the 2012 championship at the wheel of a still-inferior car, Fernando Alonso is being hailed almost universally within the F1 paddock.

The season began disastrously for Ferrari with the ailing F2012, but as the technical boffins set to work on its weaknesses, the Spaniard at the wheel was always flawlessly consistent.

Totally outclassed in Australia, he still finished fifth, he is the only driver to have won more than one grand prix so far, and Alonso has never been outside of the points at the checker.

The result is a 20-point lead as the mid-season point nears, and on Sunday he will start a race from pole position for the first time in two years.

"Alonso does more things right than any other driver in the field," former Williams co-owner Patrick Head, on a rare visit to the paddock on Saturday, told Germany's Auto Motor und Sport.

The praise is just as shining from another enemy team — Mercedes.

"He is simply one of the all-time greats," Ross Brawn said at Silverstone.

"He wins races he shouldn't win, races that he's got no right to win. And that's the mark of a great driver," the Mercedes team boss told the Guardian.

"He's not had a great car this year but he's on top of the championship. He has managed to get there because of what he is, the driver he is."

The praise doesn't stop there. Even Red Bull's Christian Horner had to admit that – despite Sebastian Vettel's utter dominance in Valencia two weeks ago – the Spaniard is the "obvious" threat.

It's a similar tune even among Alonso's on-track rivals.

Caterham's Heikki Kovalainen said: "Whatever the track, whatever the conditions, there is always one common denominator — Fernando is always near the front."

"It was so incredibly unfortunate," the race director, starter and technical and safety delegate told the Spanish sports newspaper Marca at Silverstone.

There have been suggestions Marussia was at fault for putting an inexperienced driver – who does not have an FIA super license – at the wheel of a powerful 2012 single seater.

And the fact a truck was parked nearby with its tail-lift positioned at visor-height has also raised questions about negligence.

"I think that if Felipe (Massa)'s accident (in 2009) was one in a million, then Maria's was one in five million," Briton Whiting added.

"The circumstances were just so unique that it was just incredible bad luck," he said.

Whiting said that, even at the time of de Villota's incident, the FIA was already looking at ways to better protect the drivers' heads.

"With the kind of protection we are studying, an accident like that would be unlikely, but also the chances of repeating these same circumstances are so remote," he said.

"We're looking more at the case of an impact with a wheel, because this can happen several times in a year. Maria's circumstances may never occur again," added Whiting.

Referring again to the head protection studies, he continued: "We can only do it as fast as we can, because it's a very complicated matter.

"In Maria's case, yes it (head protection) would have worked, but perhaps in many other cases the problems would be worse, like extraction or visibility.

"We have to make sure we aren't making something better for one type of accident but worse for three more."

The German newspaper Kolner Express said members of the Marussia team have been banned from talking about the de Villota incident this weekend at Silverstone.

Peter Sauber is quoted as saying: "I know as much as you do — or even less."