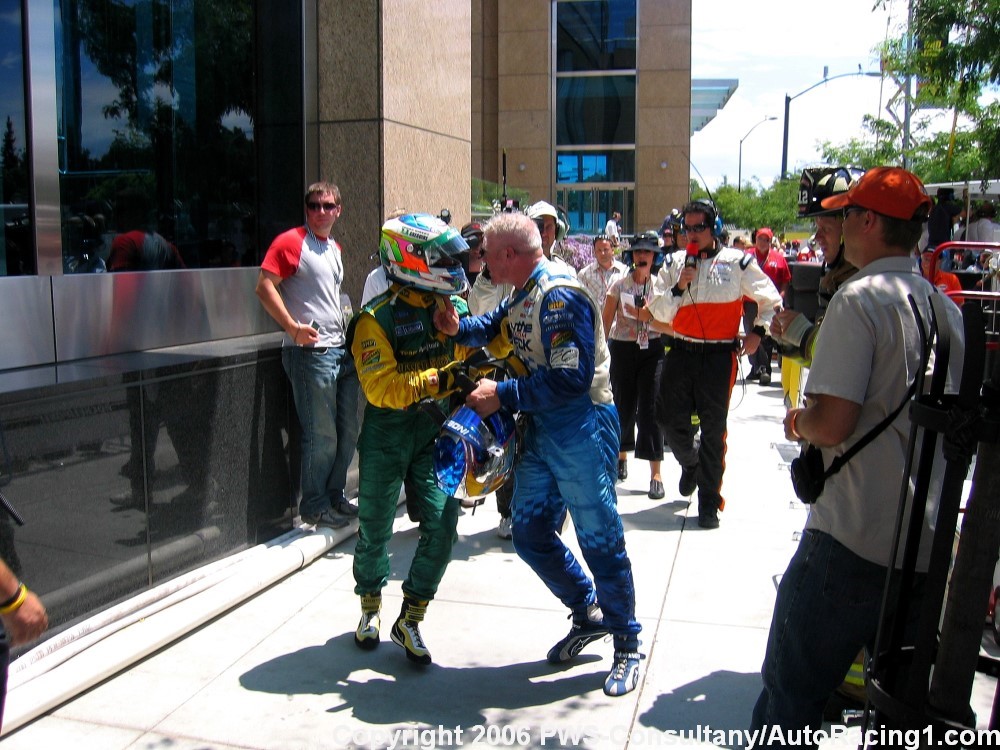 Not the part, however, where the two resorted to fisticuffs to settle their differences — a piece of North American open wheel lore racing that lives on in highlight reels — at the San Jose Grand Prix in 2006 after Tracy wrecked Tagliani’s race car.

That ended up being the infamous “French helmet" controversy where Tracy accused Tagliani of acting like a “French Canadian" hockey player who wouldn’t take off his helmet during a fight.

Today the two are friends and in fact were long time neighbors in Las Vegas before Tracy moved to Phoenix and Tagliani moved to Indianapolis last season.

On Friday while Tagliani was practicing in the No. 98 Barracuda/Bryan Herta Autosports Honda Dallara at Exhibition Place Tracy was at Indianapolis Motor Speedway for two days of testing in the Rolex Grand Series Doran Racing No. 77 Daytona Prototype Ford in preparation for The Brickyard Grand Prix where he is scheduled to race on July 27.

Sunday will be the first IndyCar race in Toronto without Tracy on the grid in 20 years.

The “Thrill from West Hill" effectively ended his IndyCar career this season when he could not put together a sponsorship package that would allow him one last trip around the Honda Indy Toronto’s Exhibition Place temporary street course.

Tagliani said times have changed in big time racing where it is difficult for driver’s of Tracy’s stature to just jump into a race car based on talent alone.

“I think the way the sport has evolved I am not surprised at (Tracy) not being here," Tagliani said. “It is unfortunate because in the years that Paul was in the series he was getting paid to drive.

“And now you have to bring sponsorship if you want to drive. I think for 20 years he has been used to just receiving a phone call and he shows up and drives."

In his case, coming to the series nearly a decade after Tracy started, Tagliani said he learned quickly that hustling for sponsor dollars was the only way to get to race.

“I came along after Paul and pretty soon I had to start bringing my own sponsorship to race so it was sort of easier for me to make that transition, but for him it was maybe tough to accept that he needed to be on the phone and create sponsorship opportunities to stay in the series."

But Tagliani quickly added that there is no need to feel bad for Tracy, who after all made a lot of money racing for such successful teams as Penske, Green and Players.

“It’s not like he really needs a job," Tagliani said. “I have seen his house and his toys and he seems to be doing pretty well." Toronto Sun