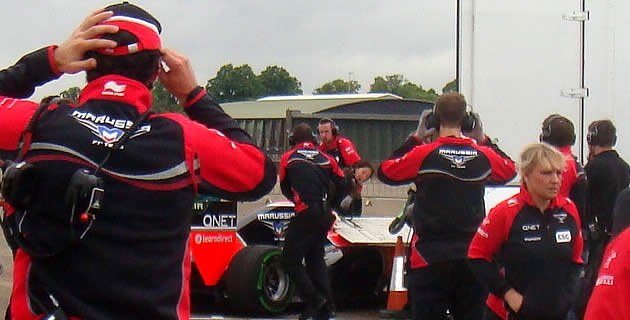 UPDATE #5 “Further to the accident involving the Marussia F1 Team’s Test Driver Maria De Villota this morning, the team can confirm that Maria was transferred by ambulance from Duxford Airfield, where the accident happened, to Addenbrooke’s Hospital in Cambridge.

“Since Maria’s arrival at the hospital at approximately 10.45hrs this morning, she has been receiving the best medical attention possible at the hospital, which is the region’s major trauma centre. Maria is conscious and medical assessments are ongoing. The team will await the outcome of these assessments before providing further comment.

“The team’s first priority at this time is Maria and her family." Marussia PR

Reports have said the female driver's accident, that occurred when the 2012 car accelerated mysteriously on approach to the makeshift pits at Duxford airfield at the start of an aerodynamic test day, caused life-threatening injuries.

BBC Cambridgeshire presenter Chris Mann described how Spaniard de Villota, 32, struck the loading board at the back of a large articulated truck "at helmet level", her head taking the brunt of the estimated 50mph impact.

Audio of the incident depicted team members saying: "Jesus Christ. F**k — get the ambulance. We need an ambulance."

Mann said de Villota was apparently unconscious for 10 or 15 minutes, and photos show the truck loading board at the Marussia cockpit, at visor-level.

Sky Sports F1 was on site with a small filming crew.

"We were all asked to leave about 20 minutes after the accident had happened — she was still in the car," said assistant producer Helen Brown.

"Obviously the team looked quite upset," she added. A photo shows team members hugging one another.

Emergency medical charity Magpas said they treated de Villota for "severe facial and head injuries" before she was transported to hospital.

The statement said de Villota was given pain relief and was put into an ambulance in a stable condition, according to CNN.

07/03/12 Eye-witnesses confirm that the accident occurred after de Villota had pulled up in front of the mechanics. the car was stationary at the time, but as the team approached the car, to wheel it back into the garage, it suddenly accelerated forwards and crashed heavily into a stationary parked vehicle. As a result, the front of the car was destroyed and MariaÂ´s helmet was seen to take the majority of the impact with the side of the truck.

“This sounds very much like the cars anti stall system engaged at the end of the run. Inexperienced drivers having their first runs in a F1 car can be caught out by this. As they slow to stop the car or make a low speed turn (for example into a garage) they lift off the throttle and let the revs drop. The ECU senses this and sets throttle to around 50% with the car still in first gear resulting in a sudden acceleration such as the one described."

07/03/12 Emergency medical charity Magpas, which helped to treat Villota at the scene, said she had suffered "facial and head injuries" and was in a stable condition on her arrival at hospital.

BBC Cambridgeshire presenter Chris Mann, who witnessed the crash, said the car had completed a circuit when it "suddenly accelerated" into the back of the lorry.

"From where I was standing it looked like the helmet took the brunt of the impact," he said.

"Strangely, the car suddenly accelerated into the lorry and the car went careering into the side of the loading board."

He added: "There was a terrible moment when everyone was just very shocked by the impact and the suddenness of what had happened."

He said de Villota had been driving at up to 200mph during the testing, but the car was travelling considerably slower at the time of the crash.

The female driver was straight-line aerodynamic testing the single seater raced in formula one by Timo Glock and Charles Pic at the Duxford (UK) airfield.

A statement issued by the team said the incident occurred at the end of 32-year-old de Villota's first installation run, involving "an impact with the team's support truck".

"Maria has been transferred to hospital. Once her medical condition has been assessed a further statement will be issued," the statement added.

A reporter said the car "suddenly accelerated" into the back of the truck.

"From where I was standing it looked like the helmet took the brunt of the impact," said BBC Cambridgeshire presenter Chris Mann.

A police spokesman said it appears "the driver has suffered a serious injury".

07/03/12 “At approximately 09.15hrs BST this morning, the Marussia F1 Team’s Test Driver Maria De Villota had an accident in the team’s MR-01 race car at Duxford Airfield where she was testing the car for the first time. The accident happened at the end of her first installation run and involved an impact with the team’s support truck.

“Maria has been transferred to hospital. Once her medical condition has been assessed a further statement will be issued." Marussia F1 PR