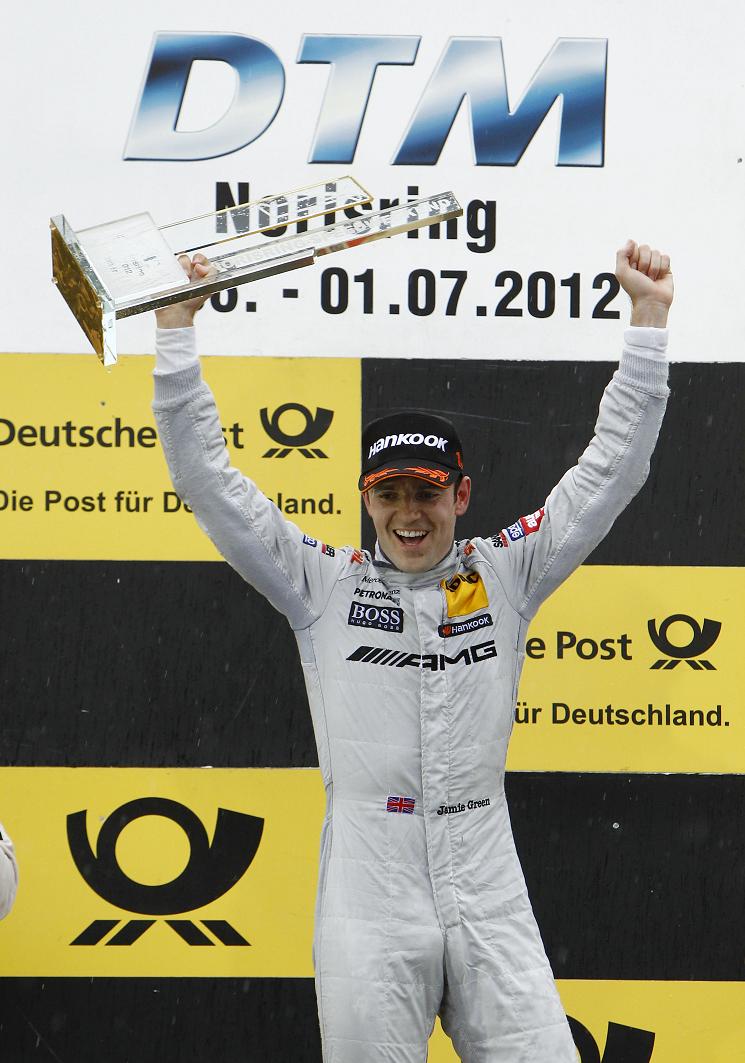 The fifth DTM round at the Norisring ended with a bang. With his DTM Mercedes AMG C-Coupé, British driver Jamie Green crowned a great recovery with his first season win and mastered the constantly changing weather conditions. With three laps remaining, the 30-year old was still in third place. After that, he first overtook Canadian BMW driver Bruno Spengler and then caught reigning DTM champion Martin Tomczyk (BMW) to claim his fourth race win in Nuremberg in five years.

For his employer Mercedes-Benz, it was the tenth consecutive victory at Norisring. “I am so proud of my success. The race was hard, but I felt really well in the car. On the last ten laps, my tires built up an immense amount of grip and that enabled me to win", said an overjoyed Green.

Tomczyk, who took the checkered flag in second place only 0.687 seconds behind Green, said after the race: “It is quite annoying when you are leading the race for 75 laps, but still don’t win. But with Bruno and myself, there were two BMW drivers on the podium, which is a great performance." His fellow BMW driver Spengler rounded out the podium after finishing third.

Points’ leader Gary Paffett (Mercedes-Benz) came home in an impressive fourth place. On the opening lap already, the weather conditions caused a mass collision, in which several cars were turned around, including the Brit’s car. The 31-year old dropped back to 20th place, but with strategically well-planned pit stops and a faultless race, he was able to make his way back up to finish fourth. Paffett remains in the lead of the drivers’ standings with 95 points from Green (69) and Spengler (58).

Paffett’s fellow Mercedes-Benz driver David Coulthard also had reason to celebrate. In fifth place, the Scot achieved his best DTM result to date. German Mike Rockenfeller ended up as the best-placed Audi driver in the only DTM race on a street circuit. “I started eleventh, so a sixth place at the end is not too bad. The DTM is tough, you have to take it as it comes", the 28-year old said.

Brazilian Augusto Farfus (BMW) and Swede Mattias EkstrÃ¶m (Audi), who had started from third and fourth place respectively, were disappointed. They were also involved in the collision after the start of the race. EkstrÃ¶m immediately parked his car in the pits. Farfus still tried to complete the race, but had to give up on lap 16. Ralf Schumacher (Mercedes-Benz) also was unable to finish a race that had been good up to that point. The German even led the field, but then had to cope with technical problems and retired on lap 46.

Norbert Haug, head of motorsport Mercedes-Benz: “That was nothing for people with weak nerves, a real thriller. Jamie has done a really good job. I knew that he had the speed and I was hoping for a win. The tenth win in a row at the Norisring is making me very happy and proud. However, we remain on the ground, we will not start thinking that we are unbeatable here. I am also happy for Gary as he still made it home in fourth place, in spite of the accident after the start."

Jens Marquardt, BMW Motorsport director: “Of course, for me, it was an emotional roller-coaster. Missing out on a 1-2 that seemed so certain so closely before the end of the race is annoying, but we have four cars in the top ten, two of which are on the podium. This is a huge success for BMW and I am more than happy. I am looking forward to the next event in Munich. The stadium is within an eyeshot from our headquarters."

Dr. Wolfgang Ullrich, head of motorsport Audi: “Today, it was more than disappointing. For us, the race was basically over in the first corner after ‘Eki’ was pushed into the car in front of him and almost all our cars were involved in the turmoil. Mike Rockenfeller made it through the corner unscathed, but he also has lost a lot of time in the first pit stop."