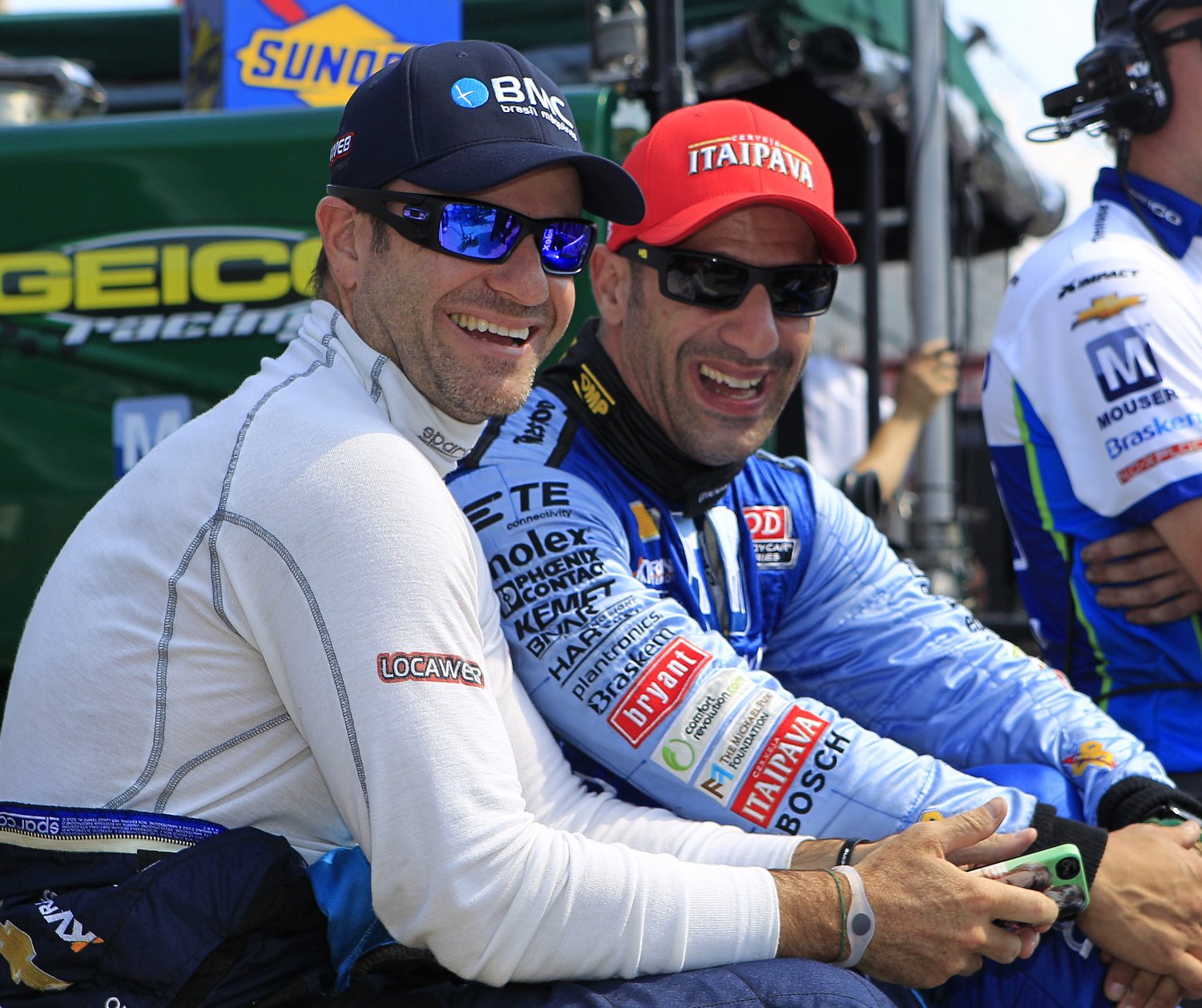 Upon meeting him, Rubens Barrichello does not strike one as an Old West gunslinger, the quiet, ominous stranger who strides into town with a well-earned reputation to save the day while attracting women, inspiring children, making good men feel strong and bad ones weak.

The IndyCar Series could use someone a bit like that — with the heroics on the steering wheel and throttle, of course, rather than handling a gun.

It hopes Barrichello is the man.

Big, fond hopes are tied to the 39-year-old Brazilian. He signed on two months ago, one of the biggest names ever drawn to Indy racing, after a major career on the Formula One series.

"I'm happy with the situation, so far," Barrichello said. "And I hope by the end of the season that I have a pretty good result."

But, Barrichello (pronounced bar-i-KELL-oh) seems less a hero and savior than the guy next door who is really into cars.

And, in Milwaukee, Detroit and Newton, Iowa, some of the places he will race, that might be the best news the IndyCar Series will receive this year from its prized catch as it continues to struggle to grow its fan base in the United States and beyond.

Turns out, when Barrichello is not racing a car with a 550-700 horsepower, 2.2 liter, V6, turbo-charged Chevrolet engine capable of producing 12,000 rpm, he drives a Tahoe.

"Here at Indy, they gave me a Tahoe," Barrichello said, with his easy manner and soft smile.

"Back in Brazil, I am still just getting together with Chevy to see what I need. But, before that, I had an Audi RX6."

Many motor sports fans in the United States may not know it, but Rubens Barrichello isa big name.

He is the most experienced driver in Formula One history, starting 322 of 326 races during a 19-year career.

From 2000-05, he was part of one of the most successful Formula One teams in history. Racing for arguably the most auspicious name in the sport, Ferrari, he was paired with the seven-time world champion Michael Schumacher.

To motor sports fans across much of the globe, Barrichello is a lion.

The long schism between the Indy Racing League and Championship Auto Racing Teams (CART) drained fans and sponsors. Danica Patrick was postured as the savior, but she won once in 116 races.

Into that breach comes Barrichello.

According to the 11rowsof3.com website — named for the starting grid in Indy racing — he has one million more followers on Twitter, more than a combined 24 Indy drivers.

But he tweets less than he drives.

"It's been coming along nicely," he said of the three races before the Indianapolis 500.

"I didn't have the results that I wish I had. But they're coming."

After finishing 11th at Indianapolis on Sunday, Barrichello has no victories and three top-10 finishes, an admirable record for a driver becoming accustomed to both a new form of racing and new tracks, simultaneously.

"I always felt like it was a great league to watch and it must be fun to drive the cars," said Barrichello.

Barrichello's Formula One career wound down with the Williams team in 2011. His seat was given to a younger driver.

"He was with me when the talk to Williams faded away, and he said, 'Do you want to try my car?'" Barrichello said. "And I said, 'I'm fine for now. I just want to think it through.'"

The cars in Formula One and Indy look somewhat similar. But the experience is different, with advantages in speed and handling going to Formula One.

"The car is basically 200 kilos (441 pounds) heavier," Barrichello said of the Indy racer.

"There is a turbo engine, which is aspirated in Formula One. (The difference, essentially, is forced air induction, powered by exhaust, into the combustion chamber in the Indy car, as opposed to the more powerful system in Formula One in which the normal atmospheric pressure does it.)

"You don't have tire warmers at Indy, and that's been very, very difficult for me to feel the car when I get back to cold tires.

"With the blankets, you just go flat out from the word go, in Formula One.

"We don't have power steering here," he said. "So a lot more force is through the steering wheel.

"I haven't been having problems physically with it. I'm smooth to the steering wheel, but I'm having to put some big power on it."

What is daunting to many Formula One drivers about Indy racing is the walls, especially around the high-speed ovals.

Formula One circuits are mostly designed with ample room for open-wheel cars in trouble to simply leave the track, where their speed is often absorbed by specially-designed gravel.

Schumacher says the American arrangement is simply too dangerous.

"The speed you do that close to the walls, if you have an accident, there is no way a chassis can survive a certain way of having a crash," Schumacher once said on "60 Minutes." "And that means your legs are going to be heavily damaged, or even worse.

It was reported this year that Barrichello would opt to race only on the slower, less-confined road circuits in the IndyCar Series, at least in his first season, at the request of his wife.

But Barrichello is all in.

"With Indy car, the walls, the close proximity to them, it makes you feel not as safe," he said.

"But the walls are there to let you go into it and just slide. So the hit is actually, the impact is actually not so big.

"It's a different philosophy, and I have no problem."

Moreover, he embraces the dare.

"The challenge is so nice because of that, too," he said.

"The tracks are bumpy because you have the walls and so sometimes you don't go as far to the walls, you don't have the grip.

"But somebody uses that, and then has an advantage."

Some Formula One drivers who compete in Indy racing later in their careers are unpopular because of their air of superiority.

Barrichello seems aware of that minefield.

"I think I can help the drivers in Indy cars with my knowledge. But I don't pretend to come here and bang my hand on the table and say, 'Ah, that's the way it has to be done,'" he said.

"I think definitely we have to learn this new phase, this new year, before I can put it out what I think is right or wrong."

As for the Chevrolet Detroit Belle Isle Grand Prix, Barrichello is eager.

"I'll tell you it couldn't be better. I saw from the outside and I will see from the inside, and it's been amazing," he said.

"I've been follower of this race from the early period when it was Formula One and with Indy.

"I have in my mind a memory, which is this: Just before you pass the entry of the pit lane there's a fast corner and then comes a break, and then you go right and left.

"It is tight in some areas, and wide in some others. So you just have to get used to it before you are ready to go qualifying.

"It is very much a thrill to be here.

"In Brazil, we have this image of Detroit as being the capital of the motor racing, with all of the companies and everything, and all I wish is to be competitive and to get to know the place."