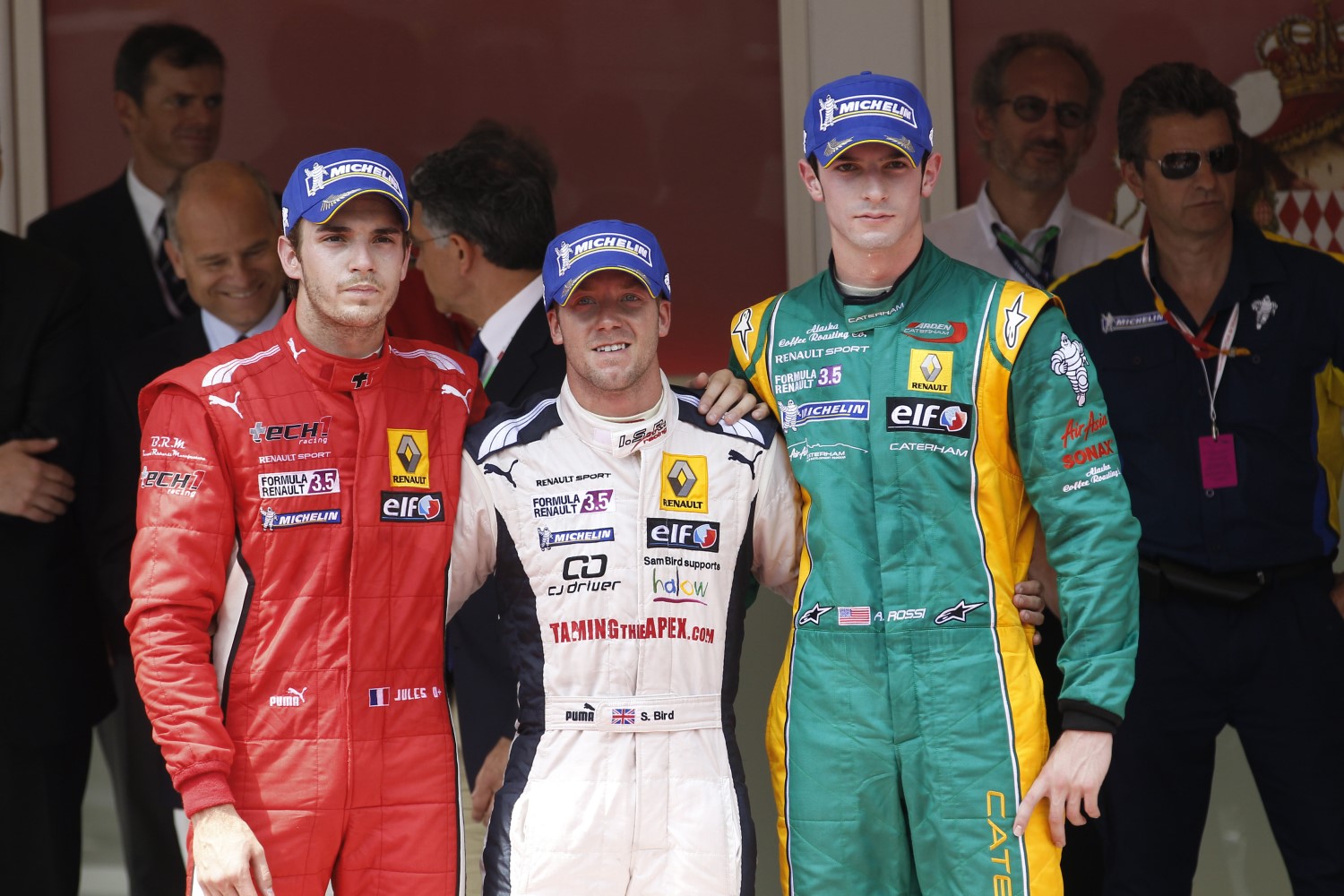 Sam Bird (ISR) denied his opponents even a sniff of success in the streets of Monaco, leading the weekend’s proceedings from free practice to the checkered flag at the end of the feature race. The Mercedes AMG F1 Team driver claimed victory in the principality ahead of Jules Bianchi (Tech 1 Racing) and Alexander Rossi (Arden Caterham), and finishes the meeting top of the Formula Renault 3.5 Series championship.

Under sunny skies in Monaco, the curtain-raiser for the 70th Formula One Grand Prix in the principality got underway with Sam Bird lining up on pole alongside Alexander Rossi, on a grid packed with drivers and famous names from the world of motorsport and Formula One.

Bird got away quickest as the lights went out and held the lead, with Bianchi passing Rossi to move into second. Kevin Magnussen (Carlin) was forced to retire early on after hitting the barrier at Sainte-Dévote. It was Bird, then, who led the race at this stage ahead of Bianchi, Rossi, Robin Frijns (Fortec Motorsports) and Kevin Korjus (Tech 1 Racing).

Bird and Bianchi then quickly began to pull away from the chasing pack. Rossi, third, also opened a large gap on Frijns, who was in turn followed closely by Korjus and Nico MÃ¼ller (International Draco Racing). This group, however, was unable to keep up with the pace set by Bird and Bianchi.

After Bird held the advantage early in the race, Bianchi began to step up the tempo. Bianchi, third driver for Sahara Force India and a member of the Ferrari Driver Academy, recorded a series of fastest laps to close the gap on the race leader. This fast pace allowed Bird and Bianchi to stretch their lead over Rossi and Korjus even further. Championship leader Frijns, meanwhile, had to retire on lap nine after experiencing a problem with his pneumatic gear control.

As the race passed its midway point, there were two stand-out battles: Bird versus Bianchi, for first place, and Rossi versus Korjus, for third. MÃ¼ller, meanwhile, did a perfect job of holding off the challenge of Marco Sorensen (Lotus), Nick Yelloly (Comtec Racing), Mikhail Aleshin (Team RFR), Walter Grubmuller (P1 Motorsport) and Richie Stanaway (Lotus). Stanaway, for his part, finished his race against the barrier after his throttle became stuck at the exit of Piscine corner. This allowed Carlos Huertas (Fortec Motorsports) to move up into tenth place.

The Tech 1 Racing drivers maintained the pressure on their rivals until the final laps. Bianchi continued to push in hope of snatching the lead from Bird, while Korjus still had his sights set on Rossi’s third place. The suspense continued to the end, but the order at the front remained unchanged as the drivers took the checkered flag. Bird, then, chose the ideal surroundings to record his maiden Formula Renault 3.5 Series victory. He finished first ahead of Bianchi and Rossi, and leaves Monaco with a five-point lead over Frijns at the top of the championship.

Sam Bird: “Last year, in the GP2 Series, I didn’t have much success here. This weekend, everything went like a dream. It’s an impressive thing to win in Monaco, so I’m a bit emotional. Huge credit must go to the ISR team, who have done a brilliant job. We’re top of the championship this evening, but that’s not the most important part… there’s still such a long way to go in the championship."

Jules Bianchi: “It was a great race. I pushed from start to finish, even though I preserved my tires for a few laps. Sam Bird didn’t make the slightest mistake. Congratulations to him and his team. We needed points today, so it’s a job well done. For us, the championship really starts today!"

Alexander Rossi: “For the Arden Caterham team, it’s a great satisfaction to record their first ever podium finish in this discipline in Monaco. To be honest, we lacked the performance to keep up with the pace of Sam and Jules. So I defended my position. This result gives us a lot of hope for Spa-Francorchamps, which is my favorite circuit."