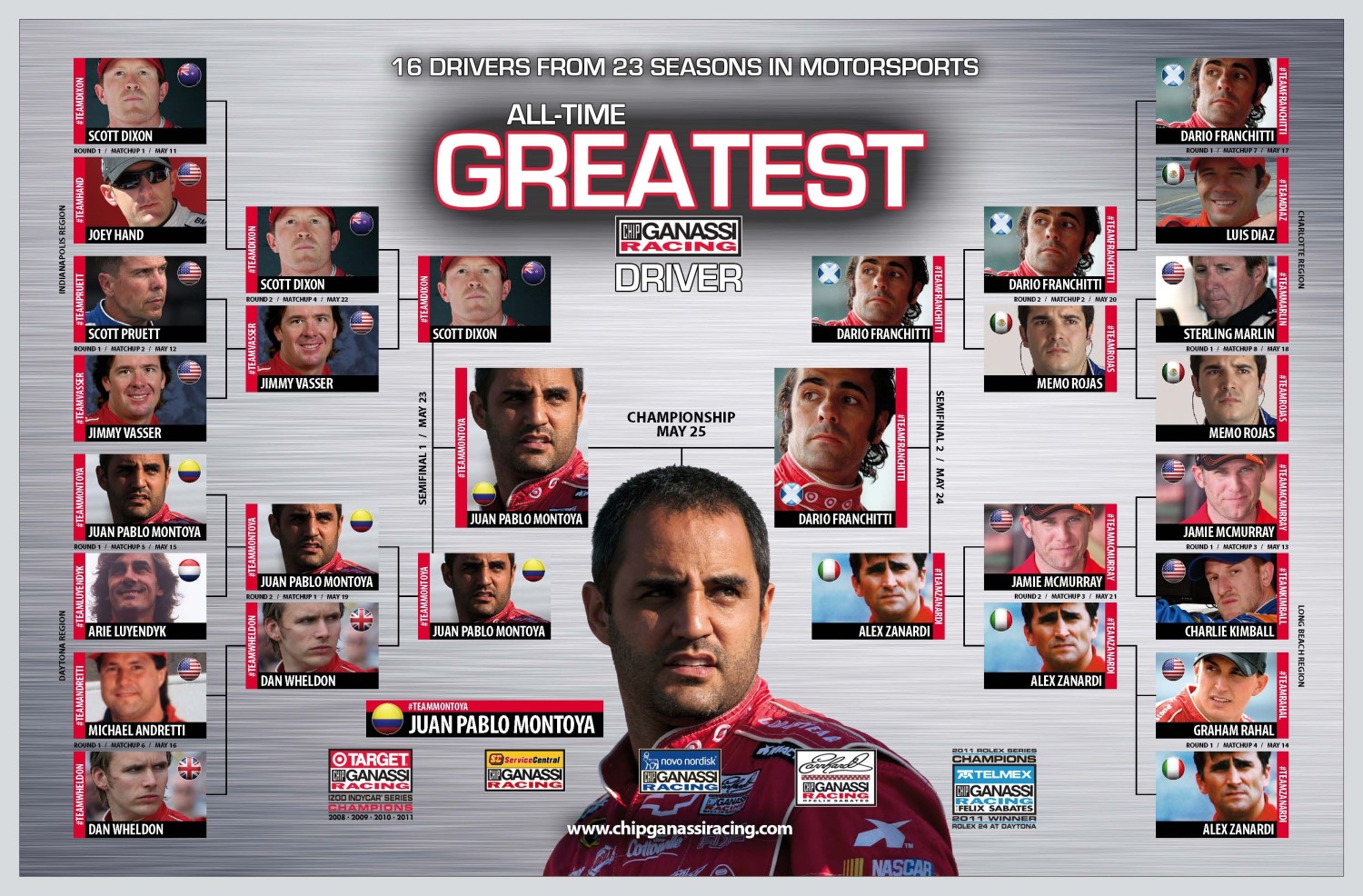 With both the IZOD IndyCar Series and NASCAR Sprint Cup Series holding two of their largest events of the season during the month of May, CGRT launched their first-ever all-time greatest driver bracket to encourage fans to vote for their All-Time Greatest Chip Ganassi Racing Driver through the team’s social media platforms.

With over 23 years of history in motorsports, CGRT has earned 14 championships and 145 victories while currently racing in three different series with an all-time team roster of over 50 drivers. To kick-off the campaign, a line-up of just 16 finalists was revealed through the team’s Facebook and Twitter accounts for the first round of match-ups. Nearly 12,000 fans submitted their vote using a driver-specific hashtag with #TeamMontoya bringing in almost 7,000 votes. The promotion-specific hashtag – #GreatestCGRDriver – accumulated over 6 million impressions and reached nearly 3 million accounts, making it the most successful social media promotion to date for Chip Ganassi Racing Teams.

Juan Pablo Montoya: “It’s great to see the fans get so involved with the contest and for them to pick me makes it that much better. I was up against some tough competition but my fans and Twitter followers pulled through for me. #TeamMontoya even ended up as a trending topic in Miami and Colombia. That’s pretty cool. Thank you to everyone for the votes!"

Juan Pablo Montoya: Juan Pablo Montoya is in his fifth full season with Earnhardt Ganassi Racing with Felix Sabates in the NASCAR Sprint Cup Series (NSCS). Since his debut in the NSCS, Montoya has two wins, seven pole positions, 20 top-fives and 50 top-10s in 192 starts. He was the series’ Rookie of the Year in 2007 and became the only foreign-born driver to win multiple races in the elite series after his 2010 victory at Watkins Glen. Prior to joining the NASCAR ranks, the Colombian native won a CART Championship for CGRT in 1999 and the Indianapolis 500 in 2000. He is a two-time Rolex At Daytona Winner. Montoya is ranked fourth on the team’s all-time win list with16 wins.