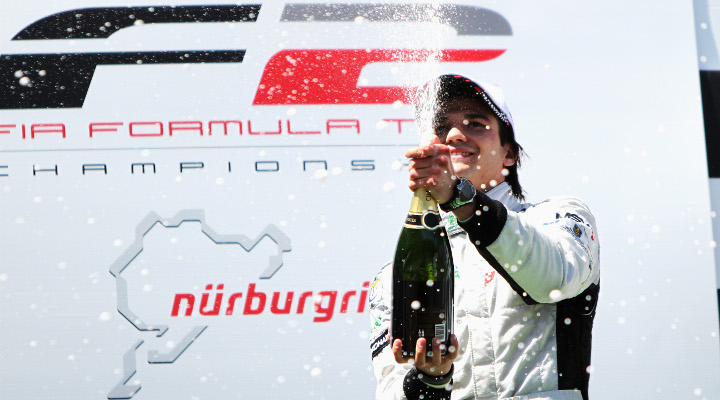 Starting from pole, the 23-year-old led from start to finish to pick up his second F2 win since Monza last year. He was followed home by championship leader Luciano Bacheta with Christopher Zanella picking up the final podium spot after a superb drive from seventh on the grid.

The Romanian led as the lights went out with Kevin Mirocha quickly getting up alongside Bacheta with the Brit just managing to hold him off around Turn 1 while the Pole slotted into P3. Just behind, a slow starting Daniel McKenzie lost his third-place grid slot to Swiss teenager Matheo Tuscher with Zanella and Alex Fontana following closely.

At the front Marinescu tried hard to pull away but was unable to shake his mirrors of Bacheta in a repeat of the battle we saw at Silverstone back in April during the opening rounds. Meanwhile, McKenzie was coming under increasing pressure from Zanella, allowing the top four to edge away. A few laps later McKenzie was forced to succumb to the pressure of Zanella with the 2011 F2 runner-up going around the outside at Turn 1 before cutting back through Turn 3 for fifth spot.

In clear air, Zanella was then able to push and catch the back of Tuscher who in turn was right up with Mirocha. Tuscher then tried to pass around the outside of Turn 1 but Mirocha gave him no room as the two ran very wide allowing Zanella to join the fight. The three then went three-a-breast into Turn 1 soon after with somehow the three emerging in the same order, all the while allowing the leading pair to pull away.

Zanella then got the better of his fellow countryman over the start/finish straight and now turning his attention to chasing down Mirocha for the final podium spot which he did shortly after at Turn 2.

Bacheta had no reply to Marinescu's pace though with the gap now more than three seconds, leaving the Brit to settle for second. Mirocha and Tuscher completed the top five with Fontana in sixth and Chinese racer David Zhu in seventh.

McKenzie eventually crossed the line eighth after losing out to Zhu in the closing stages while German Markus Pommer endured a difficult home event to only manage ninth. Hector Hurst continued his unbeaten points run with 10th with Plamen Kralev narrowly missing out on a points score in P11.

Speaking afterwards Marinescu said: "It feels really good! I really missed the podium at the last race so it's nice to be back. Last year I also missed out on the podium with a difficult weekend and I feel it's where I lost the championship so it's great to win here and was confident I could do it."

Tomorrow's second qualifying session gets under way at 9:00 (local time) tomorrow with full coverage and live timing on the F2 website.