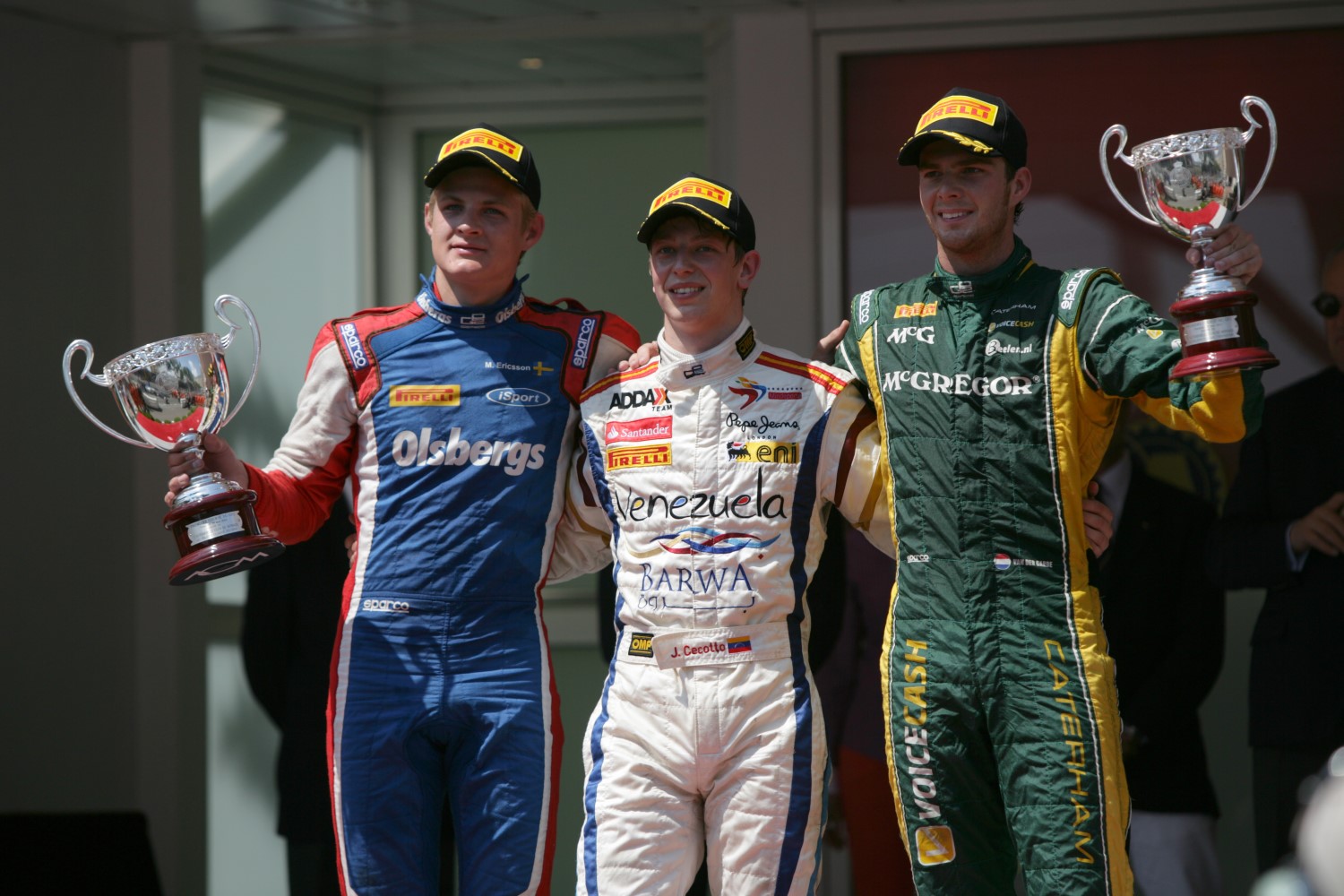 Johnny Cecotto dominated his rivals with a seasoned performance to lead from lights to flag and claim a historic victory in this morning's feature race in Monaco, looking untroubled by Marcus Ericsson and Giedo van der Garde as he claimed his first ever GP2 podium finish on the top step in the fabled principality.

The victory was set up when the lights went out: the Venezuelan made a strong start while fellow front row starter Max Chilton was slow off the line, handing Cecotto an easy run to Ste Devote. Ericsson squeezed by the Englishman for P2, while van der Garde had an open line around the outside to follow the Swede up the hill ahead of Chilton, Luiz Razia, Jolyon Palmer, Davide Valsecchi and Esteban Gutierrez.

With the tight, twisty street circuit famously difficult to overtake on, the field held station while their teams weighed up pit stop strategies, but the front pair were soon swapping fastest laps as they pulled away together from their rivals. James Calado pitted on lap 11 from P14 to try and leap frog a few cars ahead of him, but the leaders took a much more conservative approach.

Ericsson and van der Garde finally pitted on lap 22, with Cecotto in a lap later: the Venezuelan edged back out ahead of the Swede, and the pair resumed their individual battle for victory, with series leader Valsecchi holding on for 2 more laps to push up to fourth place and clear air as he set the pace in an attempt to claim even more points.

Gutiérrez and Razia had lost out in the pitlane battle and were running 8th and 9th on the road as the race wound down, but they were soon in for more bad luck as they were lapping a backmarker: the Mexican ran too deep at the chicane and bounced over the curbs and into the wall, breaking his front wing and leaving debris on the track which punctured the Brazilian's right rear. The pair were straight into the pits and out of the points for the day.

But out in front Cecotto held on against race long pressure from Ericsson to claim his first win in an echo of countryman (and 2010 GP2 Champion) Pastor Maldonado's fabled Monaco history, while van der Garde crossed the line 5 seconds later to close out the podium.

Valsecchi kept his point score ticking over with a fourth place finish just ahead of Chilton, with Palmer in sixth, Calado taking advantage of a sharp pitstop for seventh while local driver Stéphane Richelmi put himself on pole for tomorrow's sprint race, with Nathanael Berthon ninth and Stefano Coletti unable to use his pace for anything more than tenth place and the bonus for fastest lap.

Valsecchi maintains his lead in the series with 141 points, edging away from Razia on 104, while Calado and van der Garde move up to 75 ahead of Chilton on 67 and Gutierrez on 59 points, but all eyes in Monaco were on Johnny Cecotto, who claimed the biggest result of his career with victory in his former home town.