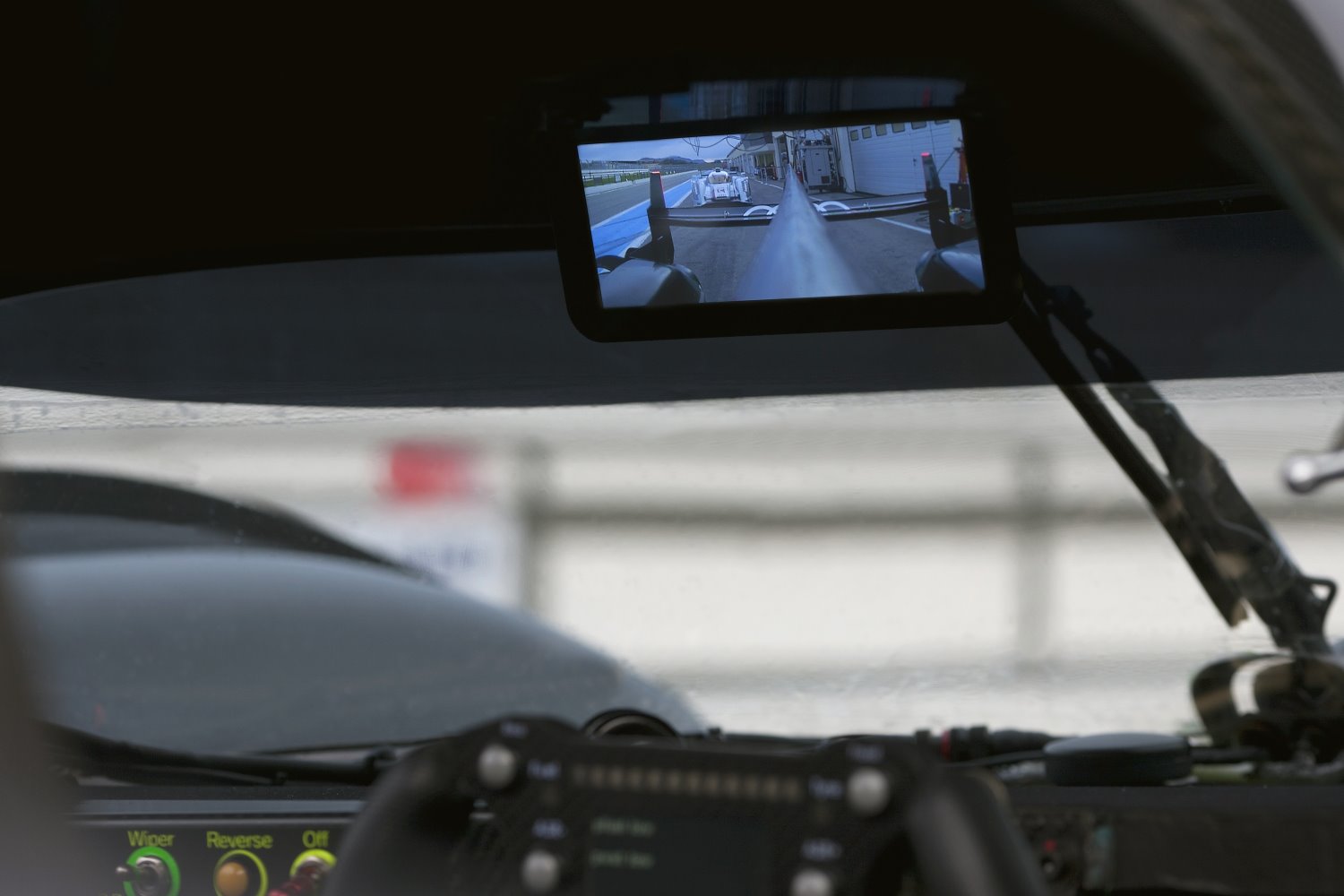 When the Audi factory drivers tackle the Le Mans 24 Hours (June 16/17, 2012) a very special technology will enhance their vision. Used for the first time in a closed LMP sports prototype, the digital rear-view mirror provides a clear view of the rear and thus substantially improves active safety.

"The work of our drivers in the cockpit is truly heavy labor," says Head of Audi Motorsport Dr. Wolfgang Ullrich in praise of his line-up of 13 sports car drivers. Aside from the physical and mental strain in endurance racing, life for the quick racers compared with their DTM colleagues is made more difficult by the special aspect of totally different vision. The extremely low, central seating position is just one reason for this. Another one is the fact that – unlike the Audi A5 DTM – none of the closed LMP sports cars have a rear window.

The concept and structure of the monocoque plus the configuration of the mid-engine in the Audi R18 leave no room for a rear window. "So, in the past, our drivers had to strictly rely on the outside mirrors when looking rearward," explains Dr. Ullrich. "Yet the rear end and the rear wings plus the vibrations that occur at high speeds significantly limit the field of vision of these mirrors." Audi has developed a solution, which thanks to advanced technology produces an amazing effect. The digital rear-view mirror that shows what is happening behind the car on an innovative AMOLED display is better than any conventional mirror.

A camera of very light weight and dimensions of just a few millimeters sits behind the antennas on the roof of the Audi R18. It captures the action at the rear on film and transmits the information to the cockpit as digitalized data. The racing situation behind the vehicle is shown on a screen that sits in the place where an inside mirror is typically located.

"This gives us a whole host of benefits," stresses Dr. Wolfgang Ullrich. "The operation of the mirror is weather-neutral. By contrast, when using outside mirrors, heavy water spray severely impairs the driver’s field of vision when it rains. For the new digital mirror, we worked out various day and night driving modes. Even when a rival approaches from the rear with high-beam headlights the image is superb and not just a glaring light spot."

This has only been made possible by the latest diode technology. Instead of conventional light-emitting diodes an active matrix OLED (AMOLED) display is used. Its name has been derived from organic semiconductors. Their major advantage: Like displays, AMOLED screens can show multi-colored images and offer better resolution thanks to particularly small pixels with diameters of merely around 0.1 millimeters. Outstanding image quality and short response time are further positive properties of AMOLEDs. "Therefore, even at 330 km/h we’re achieving a totally fluid image flow in real-time transmission," says a pleased Dr. Ullrich. At this speed, the Audi R18 covers a distance of 92 meters within a single second. As these new types of screens are freely programmable, Audi uses them to display other data as well. Information on the gear that is currently engaged, the slip level of the tires, and specific warning lights have been integrated into the central instrument.

"I’m pleased to see that we’ve managed to make another contribution to active safety through this technology," emphasizes Dr. Wolfgang Ullrich. "We’ve previously achieved major effects not only with basic concepts but also through detailed innovations. The introduction of a tire pressure warning system in the 2001 season in the Audi R8 is just one case in point. Our drivers came to highly value the digital rear-view mirror right on its premiere at Spa." At the second round of the FIA World Endurance Championship (WEC) Audi achieved a one-two-three-four victory.

The digital mirror solution is yet another example of the close meshing of volume production and motorsport. "With respect to the screen and the programming we greatly benefited from the work of our colleagues at AUDI AG’s Technical Development (TE)," says Dr. Ullrich. "They helped us move forward with components and knowledge." In the trial stage the racers even fully relied on an application that originated at the production side of the house. "The system was initially installed in an Audi R8 in which we sent Marcel FÃ¤ssler and Marco Bonanomi out to test it in road traffic," recalls Dr. Ullrich. "Today, the system functions perfectly in the Audi R18 LMP race car. I’m sure that we’ll be able to return valuable findings to our colleagues in TE. We integrated the system into the vehicle package in an extremely small space and reduced the aerodynamic effects of the camera and energy consumption to a minimum. The intensity of the demands in motorsport, such as at the Le Mans 24 Hours, will cause such a system to mature at an accelerated pace. If the digital rear-view mirror is introduced in production vehicles at a future time our consumers will yet again profit from a system that has been successfully tested in motorsport as well."