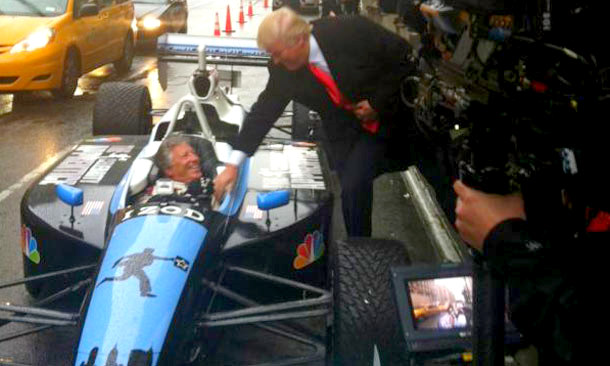 Not much turns heads on the streets of Manhattan. But spotting Donald Trump in the back seat of an Indy car – with Mario Andretti driving – now that brings out the Verizon phones to snap a photo.

Andretti pulled up in front of Trump Tower on a rainy day to chauffeur Trump to his next appointment.

“In my opinion, safer than a taxi," Andretti said. “Through the streets of New York we went in the rain – and not a hair out of place."

The ride was filmed to be aired as part of the season finale of “The Celebrity Apprentice" at 9 p.m. (ET) May 20 on NBC. Clay Aiken and Arsenio Hall are the finalists.

Andretti’s son, IZOD IndyCar Series team owner Michael Andretti, was a contestant on the show this spring. He was competing for funds to be designated to Racing For Cancer. The organization focuses on early detection and prevention as well as raising awareness and support for fighting childhood cancer.

Racing For Cancer will host its largest fund-raising event of the year — The Yellow Party — on May 24 at OneAmerica Tower in Indianapolis, featuring IZOD IndyCar Series and Mazda Road to Indy drivers and auctions. Get tickets and information at http://theyellowparty.wordpress.com/join-the-fun/ IndyCar.com