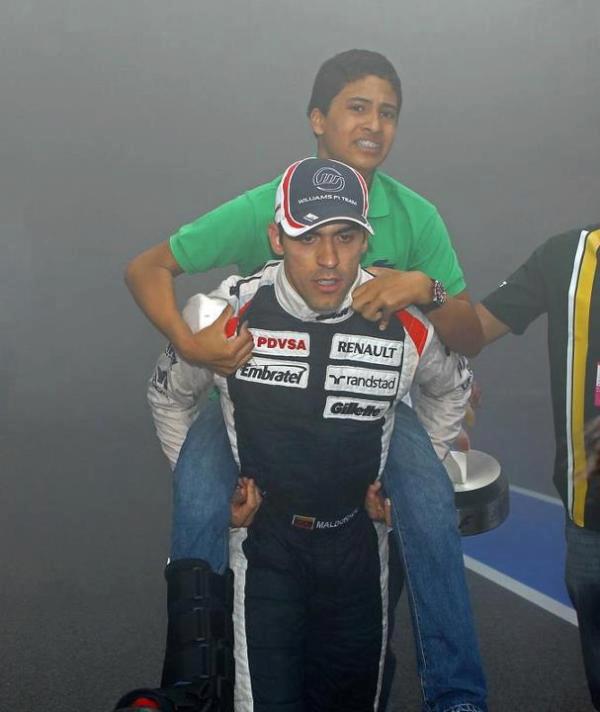 05/13/12 Pastor Maldonado turned from grand prix winner to hero on Sunday as Williams' celebrations for his debut victory went up in flames.

Just 90 minutes after being hoisted up on the shoulders of rivals Fernando Alonso and Kimi Raikkonen on the podium, having taken the checkered flag in the Spanish Grand Prix, Maldonado was forced to carry 12-year-old cousin Manuel to safety as a fire gutted the Williams garage.

An electrical fault with the fuel rig is believed to be the cause of a fire that rapidly engulfed the garage, sending team members, photographers and cameramen running for safety at Barcelona's Circuit de Catalunya.

Within seconds, clouds of black smoke were seen billowing above the paddock and track.

As for Maldonado, with his cousin holding the winner's trophy and wearing a protective boot on a broken right foot, the triumphant driver gave him a piggy back out of the garage and down the pit lane.

Bravely, Williams mechanics were joined in their battle to beat the fire by personnel from other teams, notably Caterham and Force India in the neighboring garages. It took 20 minutes to bring it under control, at the end of which nine people received treatment – four from Williams, a further four from Caterham, and one from Force India.

All were taken to the track's medical centre, the majority for minor injuries or smoke inhalation, and three Williams team members were airlifted to a local hospital, one understood to be suffering from burns.

It was fortunate, given how rapidly the fire took hold and the volume of people in the garage at the time, that no-one was severely injured.

With glasses of champagne going to waste in Williams' paddock motorhome as no-one no longer felt like consuming them, there was naturally a somber mood, replacing the euphoria from earlier. A Williams team statement read: "After today's Spanish Grand Prix a fire occurred in the team's garage which originated from the fuel area. Four team personnel were injured in the incident and subsequently taken to the medical centre. Three are now receiving treatment at local hospitals for their injuries, while the fourth has been released.