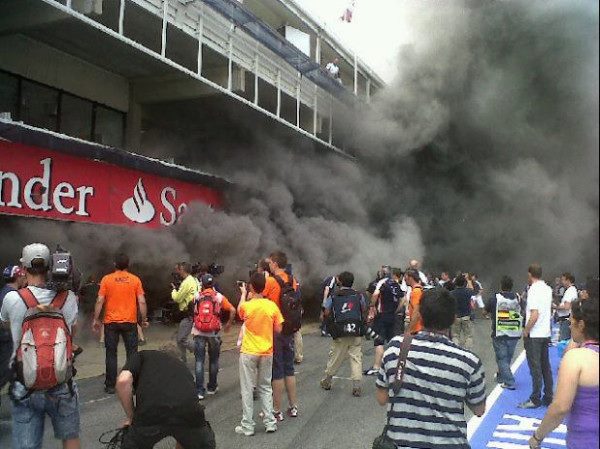 Williams pits 'destroyed' by post-race fire – Stanford
(GMM) The day after marking its first win for eight years, the once-great Williams team is counting its losses.

"Everything in our garage is totally destroyed," said team manager Dickie Stanford, who mere hours after holding aloft the constructors' trophy on the podium found himself wielding a fire extinguisher.

"Now I have to ensure that we have everything we need for Monte Carlo," he told Auto Motor und Sport.

It is believed rival teams have already offered to help Williams to get up to speed for Monaco by loaning the Oxfordshire based team any critical equipment.

It could have been worse. Although one fuel rig mechanic was pulled from the garage with his legs on fire, and airlifted to hospital, no one was critically injured in the biggest pit fire anybody had seen in F1 in recent memory.

The FW34 raced by Bruno Senna on Sunday, however, was in the garage at the time of the blaze and could be irreparably damaged.

Dozens of those who helped to put out the fire, wearing the shirts of teams up and down the smoke-filled pitlane, received treatment in the medical centre, and seven were in hospital overnight.

Despite the furious seven time world champion moaning "idiot" on the radio after the incident, stewards found him guilty of causing the rear-end crash with Williams' Bruno Senna.

Brazilian Senna, whose famous uncle Ayrton raced against Schumacher until his death in the mid 90s, replied: "Michael shouldn't call me the idiot.

"I didn't crash into him. Yes, I braked earlier with my old tires, but Michael should have enough experience to anticipate that."

The FIA stewards agreed, ruling that 43-year-old Schumacher must drop five places on the grid in Monaco.

"He ran into the back of Senna's car without an intention of overtaking."

Once derided as a mere pay-driver, Maldonado was in Barcelona hailed by French-language commentator Patrick Tambay as "a new champion".

Reporters could hardly believe they were asking the Venezuelan with braces on his teeth if he is a contender for the 2012 title, and then hardly believe the Williams driver answered seriously in the affirmative.

"Some of the results that we saw this weekend feel very strange," said Ferrari's Alonso.

Even until Spain, it had been strange — McLaren, Ferrari, Mercedes and Red Bull had shared the winning spoils, mainly due to the tire situation, as teams grapple to understand the product Pirelli is supplying.

Now, after Barcelona, minds have to go back to 1983 for the last time five different winners won the first five races of a season.

"At one race one team is there (at the front) and then suddenly they are tenth in the next race, so it's bit of an odd situation," agreed the 2007 world champion Kimi Raikkonen, who finished behind Alonso in his Lotus on Sunday.

Many thrill-seeking spectators are hailing F1's unprecedented uncertainty, whilst the purists join the engineers in scratching their heads.

Asked if he is enjoying it, former double world champion Alonso admitted: "I don't know. I don't know how to answer."

On the one hand, uncertainty is good for a sport, but the teams and the drivers are just lost at sea.

"With seven laps to go I got to a curve and suddenly the grip was gone. I even radioed the box to see if the car had been damaged," said Alonso.

His countryman Jaime Alguersuari has a clearer view.

"This is the most even formula one we have seen for 20 years, so it means you really see the work of the driver, especially with the tire management," the former Toro Rosso driver told AS newspaper.

"From my point of view this is the best F1 we've had for a long, long time, with the best man winning each time."

"Three weeks ago Williams was nowhere, now they're beating everyone into the ground," he is quoted by spox.com.

Some think the magic recipe is the ability to look after tires, but in Spain arguably F1's best driver at tire management – Jenson Button – was lost.

"I work hard at it," the Briton is quoted as saying, referring to his famous driving style, "but right now it's not working and I have no idea why."

Shanghai winner Nico Rosberg added: "Two races ago we were at the top and now everything is changed. What's up with formula one?" he is quoted as saying in German-language reports.

From a purely sporting point of view, however, 2012 is a compelling tale.

"I think it's going to be a big fight right to the end with some very close racing. Anyone can win," Lotus' Romain Grosjean is quoted by RMC Sport.

The team's 15 per cent shareholder is Christian 'Toto' Wolff, and given Adam Parr's recent departure he is now tipped as Sir Frank Williams' natural successor.

Indeed, now a regular presence at grands prix, his influence is clearly growing.

The driver he manages, Valtteri Bottas, is tipped to step into the race cockpit soon, while his wife Susie Stoddart is now a team test driver.

His countryman Alex Wurz mentors the drivers at Williams, and now it emerges that yet another Austrian is on the books.

Christian Klien, who most recently raced with HRT in late 2010, now spends a lot of time in Williams' state-of-the-art driver simulator at Grove.

The ORF broadcaster reported that, during a race weekend, 29-year-old Klien evaluates setups in the simulator, reporting back his findings to the race team.

"It has become an industry standard," Alex Wurz confirmed.

Barcelona still hoping for annual F1 presence
(GMM) Organizers of the Spanish grand prix in Barcelona are clinging to the idea the race can continue to be an annual presence on the F1 calendar.

Bernie Ecclestone said last weekend that, amid Spain's economic crisis, a deal has effectively been struck to alternate a single annual race date between Barcelona and the sport's other struggling Spanish host, Valencia.

But the president of the Catalonia government, Artur Mas, is not so sure.

According to El Pais, he said on Sunday that – together with the city of Barcelona – it is still being contemplated whether the alternating scheme with Valencia is the only option.

"Rather than talk about the alternation with Valencia, now in Catalonia we are focused on making efforts to hold a grand prix that takes us to the world, from many points of view," he said.

"What we have is an economic promotion, and work for many people, which is exactly what the country needs," he is quoted as saying by Catalunya Radio.

"(The alternation) with Valencia, we'll see. For now what is needed is to make efforts in Catalonia," he said at the Spanish grand prix.

Massa's problems 'in the head' – Alguersuari
(GMM) Felipe Massa needs to relax and focus on getting his formula one career back on track.

That is the advice of Jaime Alguersuari, the former Toro Rosso driver who is now trying to rebuild his own career by testing tires for Pirelli and working as a co-commentator on British radio.

Asked about Massa's continuing crisis, Spaniard Alguersuari acknowledged it is a "difficult time" in the Brazilian's career.

"Right now the most important thing for him is to stop thinking about the external pressure and just focus on his work and his problems.

"Sometimes you're not competitive, something has happened and you don't know what it is," Alguersuari told the Spanish newspaper AS.

"But the worst thing you can do is doubt, hesitate, get nervous and start looking at your teammate, because all that will happen is it will get worse," he added.

"Being in elite sport does not, as many believe, depend just on your skills, it's about managing the psychological, physical and technical elements.

"I am convinced that Massa is not now a slow driver, he can get back to being like Fernando (Alonso) and some days – why not? – faster.

"As a driver, your main reference is always the work of your teammate, so in the sense that (for Massa and Senna) they are Fernando Alonso and Pastor Maldonado, it's going very badly.

"At this point, only a miracle will keep Massa at Ferrari.

"He would have to do what he has failed to do in the last two championships, which is to qualify close to Alonso and score points regularly.

"Neither is what a Ferrari driver is really about," admitted Oricchio, "but it's a huge challenge given Massa's loss of confidence and an unbalanced car."

Kimi left 'disappointed'
Kimi Raikkonen has bemoaned Lotus' strategy at the Spanish Grand Prix as he believes it cost the team the chance of fighting for victory.

The Finn started and finished third behind Pastor Maldonado and Fernando Alonso at the Circuit de Catalunya, but a better start and strategy may well have given him an opportunity to battle for the win.

Most teams opted for three-stoppers on Sunday, but Raikkonen had a longer opening stint and shorter final stint than Maldonado and Alonso. In the end it left him having to make up more than 20 seconds in the final 18 laps.

It was a battle too far for Raikkonen as he finished 3.8s behind the race winner Maldonado and 0.6s behind the Ferrari driver.

Although happy to have come away with a good haul of points, the former World Champion believes they could've challenged for P1.

"I'm a bit disappointed. I expect to be a bit stronger in the race, especially at the beginning," he said.

"At end of the race, we were good but it was too late. We were too slow at the start which is why we couldn't fight for the win.

"We showed we still have the speed. Maybe we took the wrong choice in the first stop.

"I was not so disappointed during the race, but in the end, when you can catch them up almost 20 seconds, you have a disappointed feeling. If we had a few more laps, we could have fought for a victory. But that's racing and it's good points for the team."