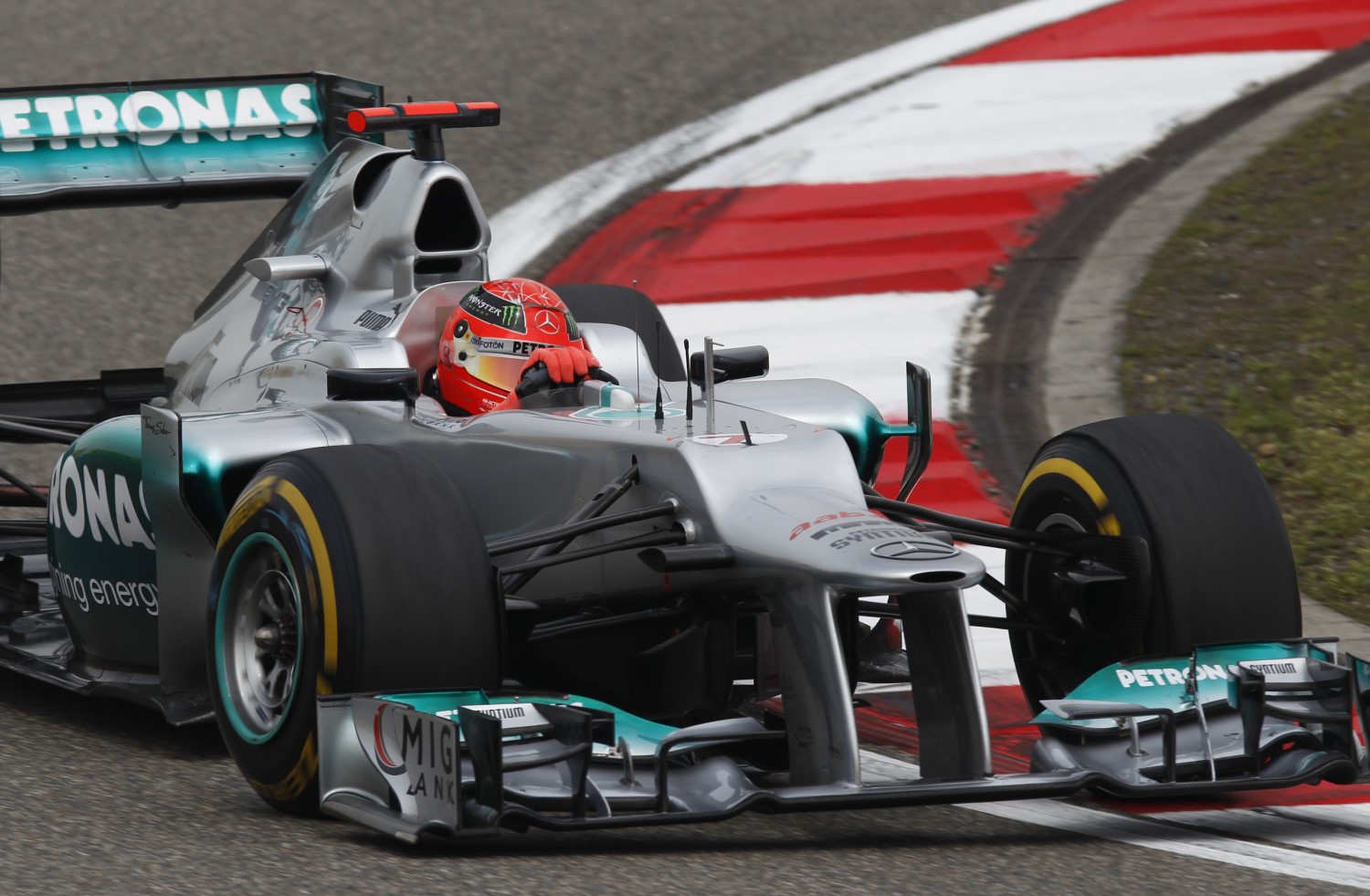 F1 must resolve Mercedes dispute for floatation
(GMM) F1 needs to resolve its dispute with Mercedes before the sport's multi-billion dollar floatation plans can go ahead.

That is the warning of the German team's chief executive Nick Fry, as Mercedes refuses to sign up to the new Concorde Agreement because rival top teams Ferrari, McLaren and Red Bull have been offered better deals.

Fry is quoted by The Times newspaper as admitting that the progress of talks with Bernie Ecclestone are "not as strong as I would like".

But he warned: "If CVC wish to float F1, I think they need this resolved fairly quickly — possibly more than we need it resolved."

At the same time, he played down speculation Mercedes is on the verge of quitting F1.

"The mindset is absolutely in capital letters: Mercedes-Benz wishes to be in F1," Fry insisted. "I would add that F1 also needs Mercedes-Benz.

"I am completely convinced in my mind that if CVC wish to sell some or all of F1, the value they can derive from that would be severely diminished if Mercedes was not a participant."

But a senior executive of Mercedes denied the spat is about money.

"It is about fairness," the unnamed official told The Times' Kevin Eason.

"We are facing a situation in which three teams will between them decide some of the biggest issues in formula one. That cannot be right."

"What frustration?" the seven time world champion was quoted as having told German media in Barcelona.

Not once but at least twice since the Bahrain grand prix three weeks ago, the Mercedes driver has suggested F1 and Pirelli have not got the balance right with the heavily-degrading tires seen so far this season.

Schumacher insists his intention was to start a conversation.

"I am quite happy that we have initiated a discussion about how much influence one or another part should have in formula one," he told reporters.

Fernando Alonso agreed, pointing the finger at the media for "exaggerating" Schumacher's view.

"I read what he said and I don't see any big problem with that," said the Ferrari driver.

Schumacher also sounded happy that his position triggered a meeting with Pirelli officials at the Mugello test last week.

"We had a good meeting," revealed the German, "to talk about this subject, so I just hope we continue to go in the right direction."

Karthikeyan admits frustration with HRT situation
(GMM) Narain Karthikeyan has played down reports he could lose his seat at HRT because of a lack of sponsorship.

An Indian newspaper this week said the 35-year-old is a million euros short of guaranteeing his place at the struggling Spanish team through November's Brazil finale.

"Right now, everything is as it should be," he is quoted by France's autohebdo.fr.

"Early in the season, (team boss) Luis (Perez Sala) said that if I was not close enough to my teammate, there is a chance I will not finish the season.

"That was put into my contract, but for now I respect all the conditions. There is no reason that I will not be driving (the rest of) this season," added Karthikeyan.

He admits, however, to some frustration about HRT's continuing rear-of-the-field position.

"To be honest I wasn't expecting the start of 2012 to be on the same lines as last year," the Indian driver told the Hindustan Times newspaper.

"Yes I expected teething problems but not to this extent."

He also admits he expected the team to test at Mugello last week.

"Personally speaking, I would've preferred some seat time at Mugello since I didn't get any pre-season testing compared to my teammate who did the Jerez test with the old car," said Karthikeyan.

"I was originally told that we would do the Mugello test but we decided to focus on putting the car together instead."

Ferrari not close to giving up on 2012 – Alonso
(GMM) Fernando Alonso has denied Ferrari is on the verge of giving up on the 2012 championship.

The Maranello based team has brought significant updates to its so far disappointing F2012 car for this weekend's Spanish grand prix.

Imagining the single seater doesn't make a major step forward in Barcelona, Alonso was asked whether Ferrari might start turning its focus to an all-new project for 2013.

"We'll see, we'll see after the race, because we don't know what car we have (yet)," the Spaniard told reporters on Thursday. "I answer you on Sunday."

Alonso said more updates for the F2012 are also scheduled for the forthcoming Monaco and Canadian grands prix.

But what if the Barcelona changes leave Ferrari with a midfield car? Would the time be right to get an early jump on the 2013 project?

"I don't think so," answered Alonso. "If the step is not good enough … we need to work harder, for Monaco and for Canada, and bring more new parts in a more aggressive approach.

"The championship is long and we will never give up in May," he insisted.

Spain to host tense drivers' meeting on Friday
(GMM) A tension has crept into F1 drivers' relationships, as they look ahead to a fiery meeting at the Barcelona circuit on Friday.

Fernando Alonso had given the first hints about the tension when he hit out at Nico Rosberg's aggressive tactics in Bahrain three weeks ago.

And earlier this week, the Spaniard insisted there is not enough "respect" between the drivers when they are jostling for position at grands prix.

Rosberg said he is happy if discussions about his driving take place this weekend, but also in the firing line is Lewis Hamilton, who passed the Mercedes driver on the asphalt run-off in Bahrain.

"I was surprised Lewis was allowed to keep his position," said Mark Webber.

"I'm sure we'll talk about it in the drivers' briefing."

McLaren's Hamilton insisted he did nothing wrong, but he added: "I'm not really bothered. It's good to have clarity.

"Mark is probably one of the most – if not the most – outspoken individuals here (in F1), so that is the least I expect from him."

Also among the most aggressive – and regularly criticized – drivers is Michael Schumacher, and he insisted that the FIA is fully able to make judgments about incidents.

"If it's not within the rules the FIA would have taken action," said the seven time world champion, referring to the incidents in Bahrain. "They didn't and I didn't see anything wrong either."

Senna name scooping up sponsors in Brazil – di Grassi
(GMM) Lucas di Grassi mentioned a very famous name when asked about his struggle to return to formula one.

Just one season into his career, the Brazilian lost his Virgin seat, but he remains one of the sport's most highly respected test drivers, and was hard at work for tire supplier Pirelli earlier this week at Jerez.

"I talked to some teams about competing in 2012, but they were all asking for contributions from sponsors," di Grassi revealed, according to Brazil's Globo.

"It's very hard to compete against the name Senna for sponsors in Brazil," he added, referring to Bruno Senna's lucrative deals that secured him the race seat at Williams this season.

Di Grassi, and Jaime Alguersuari, will return to the wheel of Pirelli's 2010 Renault test car later this year at Spa, Monza and Barcelona.

2012 Caterham 'too slow' – Kovalainen
(GMM) Heikki Kovalainen has admitted some disappointment about Caterham's progress in 2012.

In its third season of formula one, and despite being clearly more impressive than its direct rivals Marussia and HRT, the Tony Fernandes-led team intended to take a step forwards this year.

Caterham took some upgrades to the Mugello test last week, but according to Finnish sources Turun Sanomat and MTV3, not all of them worked.

"The car has a pretty good balance, but the lap times are not good enough," Finnish driver Kovalainen is quoted as saying.

"It's good to drive but it's just too slow," he insisted.

"We did not get all the updates to work as we had hoped, so in Spain we have only some things that are new," added Kovalainen.

The team is yet to score a point.

Not only that, some believe that – despite McLaren, Ferrari, Mercedes and Red Bull having fielded the winning cars so far in 2012 – Lotus is actually the favorite in Barcelona.

Raikkonen and his teammate Romain Grosjean were both on the podium in Bahrain, and the black and gold E20 set the pace last week at the Mugello test.

"You would say now that the Lotus and the Red Bull are the cars to beat," said Melbourne winner Jenson Button on Thursday.

Raikkonen, openly disappointed about his second place recently, hopes so.

"If everything goes smoothly then we can be up there," he told reporters on Thursday.

He agrees that the car was a true pacesetter in Bahrain and Mugello.

"Let's hope it works just as well if not better here," Raikkonen, 32, told the Finnish broadcaster MTV3 at the Circuit de Catalunya.

"Then we will at least have the possibility of victory," he added.

He does not, however, want to talk about the championship.

"It has happened before that I had the best car overall but was still not the champion," said Raikkonen. "There are so many little things that have to go in the right direction for you (to win the title).

"It's pointless to think about the championship. Let's try to do our job well, and see if that's enough," the self-described 'iceman' added.

Under the terms of the agreement, Rockwell Collins and Caterham F1 Team will collaborate to define aviation technology that will be adapted in the team’s quest to win the Fédération Internationale de l’Automobile (FIA) Formula 1 World Championship. In exchange, F1 fans will see the Rockwell Collins logo on the Caterham F1 Team car, in the pits and elsewhere throughout the racing season.

Riad Asmat, Caterham Group CEO: “Our relationship with Rockwell Collins is another step forward for our fast developing team and signifies the strength of our brand in the cutting edge markets Rockwell Collins leads. We are delighted to welcome Rockwell Collins into our team and are all excited about the opportunities this collaboration will bring."